The Big Bang theory rubs me the wrong way, and here is why:

The discipline of physics presently tells us that a magnetic field must complement every changing electric field. Magnetic fields regulate the influence of magnetized objects on one another, much as electric fields govern exchanges among charged particles.

The reality that a compass needle points to magnetic north is the consequence of the interaction between the magnetized needle and earth’s magnetic field. Magnetic fields also exert forces on traveling electric charges; electric meters rely on this simple fact. Conversely, moving charges create magnetic fields (electromagnets are a common example).

In short, electric and magnetic fields are linked to one another: A change in either one creates or alters the other.

Disturbances produced by radiation moving through space actually consist of vibrating electric and magnetic fields. These fields are always positioned perpendicular to one another and to the bearing in which the wave is traveling. The fields do not exist as unconstrained entities; rather, they are dissimilar aspects of a single phenomenon: electromagnetism. Together, they comprise an electromagnetic wave that carries energy from one part of the universe to another.

When some of its charged content moves around, the electric fields change, and we can visually detect that alteration. The resulting electromagnetic ripples propagate from the star as waves through space, requiring no material medium in which to move. Small charged particles in our eyes respond to the electromagnetic field changes by vibrating in tune with the radiation that is received. This visual response is how we perceive the stellar radiation – how we ultimately see the universe around us.

When light hits the eye’s retina, it causes millions of specialized cells to send signals down roughly 125 million neurons. As the 125 million signals race down the optic nerve, each signal gets pre-processed by neurons along the way. All 125 million signals get routed to the correct parts of the cerebrum based on the information they carry, and then the brain analyzes each signal, affixes emotional content to it, and totals all the information together to form an image in the person’s mind. This image is sharper, clearer, and better resolved than the images produced by the finest cameras in the world — and all of this happens in less than a ten-thousandth of a second!

If a person believes in the Big Bang, they are forced to conclude that all the structure of the human eye (and all the marvels that it can do) happened by random chance via natural selection — and all those abilities evolved along several unrelated biological lines.

The confessions of the evolutionist Frank Salisbury, whose statements revealed how different species came to have similar eyes, underscores the impasse of this line of thinking.  Salisbury wrote,

Even something as complex as the eye has appeared several times; for example, in the squid, the vertebrates, and the arthropods. It’s bad enough accounting for the origin of such things once by organic evolutionary means, but the thought of producing them several times according to the modern synthetic theory makes my head swim. (Doubts About the Modern Synthetic Theory of Evolution, American Biology Teacher, September 1971, p. 338)

The Big Bang’s rub, therefore, is this:

Evolution is either the luckiest process in the universe or it is a monumental myth.

It takes loads of faith to believe that random chance using natural selection created complex anatomical structures and physiologic processes, like the eye and human sight. It takes colossal commitment to believe that it happened more than once.

When one looks at all the eye does to produce sight and then extends that to the cosmos and all its detail, surely a rational, unbiased person must pause and ponder the human eye’s creation and the universe’s Creator. Certainly, in my mind, no belch of celestial gas could ever account for it. 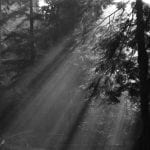 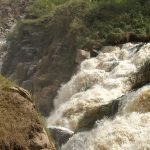