One textbook says: “…18 to 20 billion years ago all the matter in the universe was concentrated into one very dense, very hot region that may have been much smaller than a period on this page.”

Another claims that: “…from this state of nothingness the universe began in a gigantic explosion about 16.5 billion years ago.”

Teachers are encouraged to: “Stress that the earth is thought to be at least 4.5 billion years old”
This is not unbiased, factual science. These are brainwashing techniques.

If we allow teachers and educators to convince us that the first chapter of the Bible is only a failed attempt, by man, to document the history of the universe, then how do we distinguish what parts of the Bible to believe as fact, and what parts to disregard as mere fables?

Second Peter warns: “beware lest ye also, being led away with the error of the wicked, fall from your own stedfastness”

These people think that they’re dealing with a form of science, and I would agree… Science fiction! 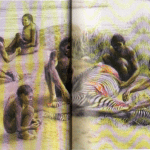