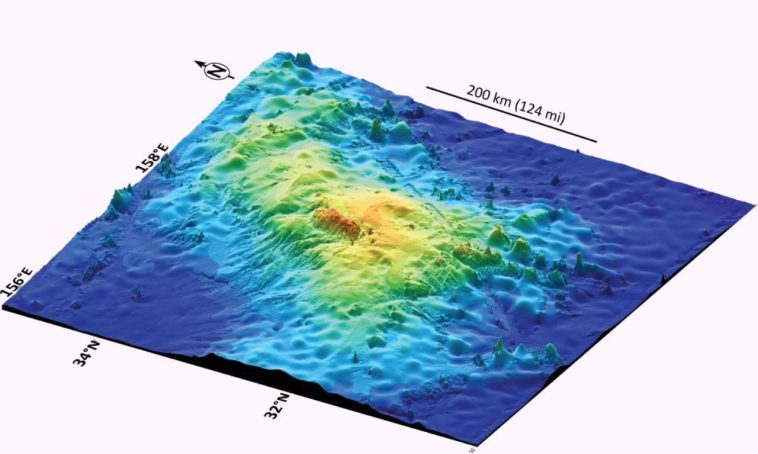 [Originally published in 2013 as The Tamu Massif, the largest single volcano on earth, erupted during Noah’s Flood]

A team of scientists led by William Sager at Texas A&M University reported finding the largest single volcano on earth. It is under the ocean and is now inactive.

Dubbed The Tamu Massif it is located about 1,600 km (1,000 miles) east of Japan and is the largest feature of an underwater mountain range called Shatsky Rise.

Reports drew attention to the unusual shape of the huge lava deposit.

The volcano is low and broad, a shield volcano. Most other volcanoes that erupt under the ocean are small with steep sides. The seafloor is dotted with thousands of such steep-sided underwater volcanoes or seamounts.

The broad, flat shape means that the lava erupted at an enormous rate such that it traveled rapidly across the ocean floor as a fluid over long distances before it was cooled sufficiently by the seawater such that it began to solidify and become viscous.

The volcano is dated at 145 million years according to uniformitarian philosophy. This timing is based on the idea that everything happened slowly and gradually, and that the Noah’s Flood catastrophe never happened.

So we have to reinterpret these dates that geologists have assigned

145 million years equates to about halfway through the Flood. The Flood occurred about 4,500 years ago. Most of the rocks exposed on earth were deposited during the Flood, which was an enormous catastrophic event, which means everything happened quickly (not over millions of years).

Some idea of this timing can be estimated from the timing of faulting on the edges of the continents, such as in southwest Western Australia. The geology suggests that the break-up of the continents and the opening of the ocean basins began somewhere around the Early Cretaceous. (A similar picture can be seen in Africa.) If the relative timing the scientists assigned to the Tamu Massif correlates with the geology of Western Australia (which it probably doesn’t exactly across such large distances), it would mean the massif was emplaced around the time the ocean basins were opening up and deepening prior to receiving the waters from off the continents.

This volcanic eruption was one of many similar eruptions all over the planet at this time as the oceans were opening up. The volume of lava emplaced during these eruptions was enormous, and they are called Large Igneous Provinces, or LIPs for short.

The eruptions for the Tamu Massif took place underwater and the volcano is still underwater. However, even the LIPs that are now on land would have erupted underwater at that time during the Flood.

It is interesting that the researchers recognize that the eruption of the volcano was a hugely catastrophic event. Sager said:

The bottom line is that we think that Tamu Massif was built in a short (geologically speaking) time of one to several million years and it has been extinct since.

Catastrophic events do not take much time, which is what we would expect from Noah’s Flood. And it would have been a lot quicker than Sager imagined—emplaced in days.

There was another feature of the volcano that puzzled the researchers. Sager again:

One interesting angle is that there were lots of oceanic plateaus [that] erupted during the Cretaceous Period (145–65 million years ago) but we don’t see them since. Scientists would like to know why.

There is a simple reason why these eruptions only took take place in one period of earth history and we haven’t see them since. The volcanos erupted as the ocean basins opened up during Noah’s Flood. As the basins began to open they began to receive the floodwaters that were covering the continents. It was a one-off event, contradicting the usual (but erroneous) geological assumption that the present is the key to the past. It happened just once and it won’t happen again.

If these scientists who are so puzzled would read their Bibles and take what they read seriously it would all make sense. They would see that God said this:

I establish my covenant with you: Never again will all life be cut off by the waters of a flood; never again will there be a flood to destroy the earth. Genesis 9:11

Message for William Sager at Texas A&M University: Noah’s Flood is the answer to your puzzle. The eruptions occurred about halfway through Noah’s Flood, which was a one-off, non-repeatable event. Now you know why. 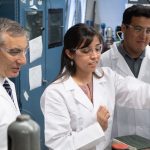 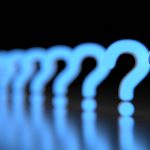