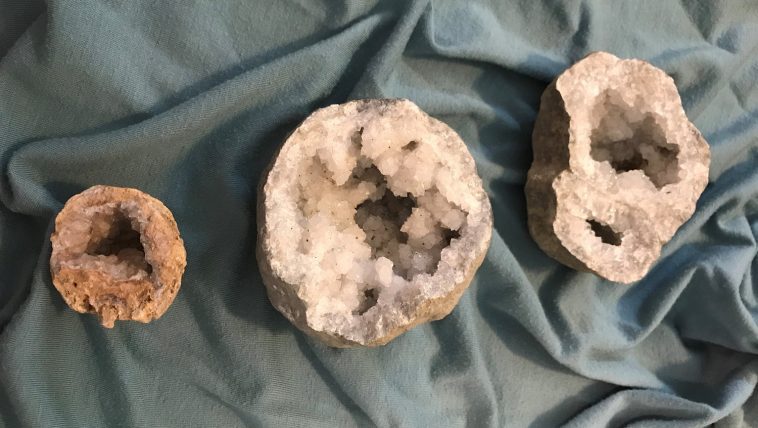 Ever since my teen years, I have been interested in fossils and petrified wood. For 30 years I have been collecting fossils and using them in presentations as evidence of the World Wide Flood. But, although they are pretty, crystals and geodes never really caught my attention—that is, until we moved to Illinois.

I now live just two hours from the geode capital of the world, the 70-mile radius where Illinois, Iowa, and Missouri meet. These Keokuk geodes are mainly round and very prolific. In fact, this small area contains the largest concentration of sedimentary geodes in the world. Soon after arriving, I began studying geodes and discovered that there is a lot of mystery surrounding their formation.

There are many types of geodes. The basic definition is any hollow space in rock that has a crystal lining. These crystal-lined spaces can be in:

These are easy to explain.

As the pre-Flood landmasses were pulverized into sediment, many minerals were dissolved in the water. These dissolved minerals could then join and form crystals in any water-filled space just as rock candy forms as dissolved sugar attaches to a string.

It is the round geodes found in sedimentary layers that have geologists mystified because first you have to explain what caused the round hole in the sediment. Although several ideas have been proposed, there is not an agreed-upon theory. Geologist J.B.Hayes has spent considerable time studying the western Illinois geodes. His theory basically states that geodes formed from concretions.

Concretions are solid round features that are also hard to explain. I like to compare them to hailstones. As tiny hail starts to fall through a cloud, it collects water becoming larger until it hits the ground as a solid ball of ice.

If geodes came from concretions, then you need to first explain how concretions formed and then how they became hollow. How could the center of the solid concretion dissolve, but not the outer shell? Even though Hayes’s idea doesn’t seem to adequately explain geode formation because he cannot explain how the concretion became hollow, he has outlined the ramifications of a good theory.

Hayes explains it would need to explain why these geodes are:

As I researched geode formation and location, I began to wonder if they could have formed as a result of the Flood.

While on a geode dig, I noticed that the geodes were embedded in a layer of hard-as-rock clay. Then at a rock show, I bought a double geode.  It was two crystal-filled geodes that had somehow joined together. It looked just like a double soap bubble. When blowing soap bubbles, often times two or more will connect creating a divided bubble.

Could geodes have formed from air bubbles?

As I did more research, I discovered that Illinois has layer upon layer of coal beneath the layers of sand, gravel, and clay. Deeply buried vegetation that is turning into coal goes through a process of decomposition. As it does, methane gas is released.

If all the sediment is water saturated, with water filling all the space between sand grains, the gas will form bubbles that travel up through the sediment and overlying water until released into the atmosphere. If the sand is just wet, the air will diffuse throughout the sediment.  Every layer above the vegetation must be water saturated. As soon as the bubble gets to a layer that is not water saturated, it will dissipate, or no longer hold together as a bubble.

What if the bubble came to a layer of sediment that it could not travel through? Air bubbles will get trapped in sticky wet clay. So putting it all together I purpose:

Summing it up in pictures

These are my original diagrams and are copyrighted 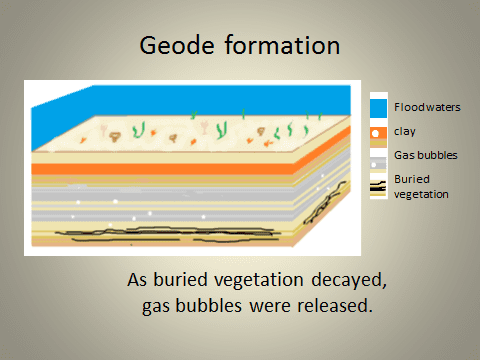 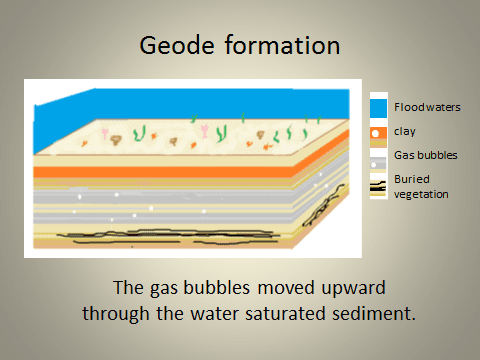 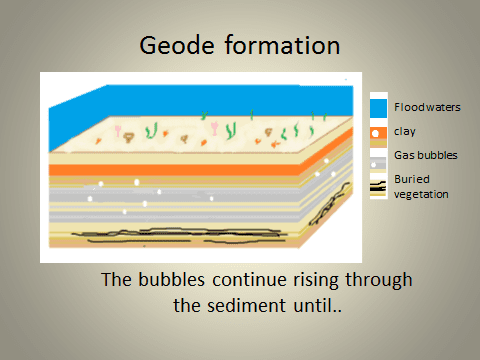 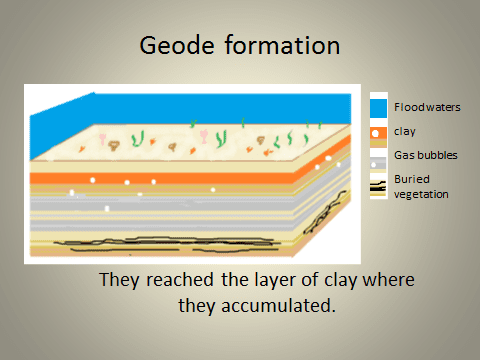 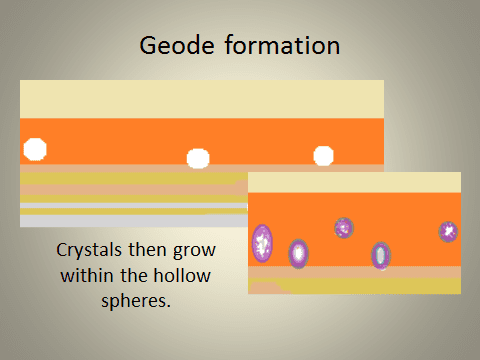 If this is how the geodes formed, then the clay sediment would have had to have been laid before the deeply buried vegetation had finished decomposing into coal. This would mean the layers were all laid quickly without any million-year time gaps.  And since all of the layers had to have been water saturated, the whole area was probably still underwater.

Now that I see geodes as being not only beautiful but also possible evidence of the Flood, I’ve started quite the collection. With more research and experimentation we may be able to accurately use them as examples of God bringing beauty from ashes—or in this case, crystals from decay and clay. 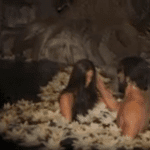