Betelgeuse and Rigel are the brightest stars in the constellation Orion. They are easily seen above and below the famous belt and sword.

Betelgeuse, the 9th brightest star in the sky, is a red supergiant. As one of the largest known stars, Betelgeuse is truly a giant – 14 times more massive than our sun and 800 times its diameter. Betelgeuse is so large that it could contain over 1 and a half billion of our suns. If placed in the center of our solar system, the outer surface of Betelgeuse would extend almost to the orbit of Jupiter – engulfing Mercury, Venus, Mars and the Earth.

Sirius, just outside the constellation Orion is the brightest appearing star in the night sky, however, the size of Sirius is vastly smaller than that of Betelgeuse. So why isn’t Betelgeuse much brighter than Sirius? Because it is thought to be around 80 times farther away.

Marking the heel of Orion, we find the blue white star Rigel, the 7th brightest star in the sky.

Some 1400 light years away, Rigel, also considered a supergiant, is 17 times more massive than our sun and 50,000 times brighter. What we see in the sky is actually two stars, a binary system, and is composed of one very large, super-bright star, and a small, fainter star, only observable by larger telescopes.

The light from Rigel illuminates a nearby reflection nebula sometimes called the Witch Head Nebula because of its peculiar shape that resembles a fairytale witch. The blue color of the nebula is not only a result of reflected blue light from Rigel – but is also due to the fact that the dust particles that make up the nebula are thought to reflect blue light more than red. Have you ever wondered why our daytime sky is blue? It’s for the same reason. The dust in our atmosphere more efficiently reflects blue light.

How far away are the stars of Orion? Scientists are really not sure. They estimate the distance at over 600 light years. Traveling at the speed of our fastest spacecraft – some 40,000 miles per hour – it would take us over 10 Million years to reach the bright stars of Orion.

The book of Isaiah tells us that the LORD created the heavens, and stretched them out. The vast universe gives us just a glimpse of His creative power. 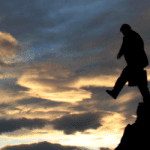