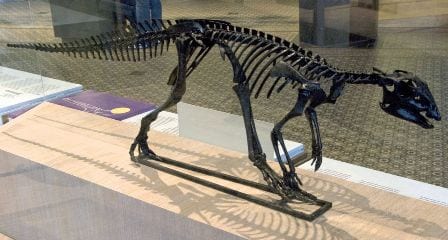 “Every beast, every creeping thing, and every fowl, and whatsoever creepeth upon the earth, after their kinds, went forth out of the ark.” Genesis 8:19

Many lines of evidence support the Bible’s claim that Noah saved two of every kind of creature on the Ark, including dinosaurs. This means that humans and dinosaurs lived at the same time rather than separated by millions of years, as evolutionists claim. Long before modern science discovered dinosaurs, many histories offered descriptions of these creatures.

Britain’s history contains hundreds of stories about the large reptiles we now call dinosaurs. Even if many of these accounts are not accurate, it is unlikely that so many similar stories were invented. According to ancient historical accounts, a large reptile killed and ate King Morvidus in about 336 B.C. In 1405, villagers near Sudbury drove what they called a large dragon into a swamp after the creature terrorized the area. It had killed and eaten a shepherd, then proceeded to eat the sheep. It was said that it had a huge body, a crested head with sharp teeth and a long tail. As recently as a hundred years ago, the older Welsh residents of Penllin in Glamorgan reported winged reptiles that lived in a colony in the nearby woods. They were described as brightly colored and reportedly stole the villagers’ chickens.

It would appear that the reason most dinosaurs became extinct after the Flood has as much to do with human expansion as it does with a cooler, dryer Earth. But these widespread stories are just what we would expect if the biblical history is true.

Prayer:
Dear Father, I praise You for Your mercy that saved mankind twice. Amen.
Notes:
After the Flood, Bill Cooper, pp. 131 135. Photo: Hypsilophodon replica at Brussels Science Institute. The first fossil was found on the Isle of Wight. (PD) 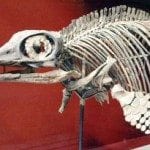 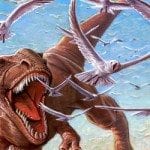