“For we know that the whole creation groaneth and travaileth in pain together until now.” Romans 8:22

The sea holds some of God’s most creatively designed living things. Just as on land, the variety of creatures in the sea was much greater in the past. One good example of this is an extinct sea going reptile known as Ophthalmosaurus. A full grown Ophthalmosaurus was about 12 feet long and shaped like a dolphin. What made it unusual were its eyes. They were each about the size of a dinner plate.

Scientists estimate that Ophthalmosaurus could see its prey clearly even in the dim light that is available 1,600 feet below the surface. Based on its body structure, Ophthalmosaurus appears to have been a strong swimmer. Adding these facts together, scientists concluded that Ophthalmosaurus regularly swam deep in the sea to find prey or avoid predators. This led researchers to examine Ophthalmosaurus’ bones more closely. When a diver rises to the surface too quickly, the nitrogen dissolved in his blood forms bubbles that can block circulation and destroy tissue. Scientists wanted to know if Ophthalmosaurus also suffered from this condition, known as the “bends.” They searched for and found depressions in the joints typical of the bends.

While God’s creation was initially perfect in every way, Adam’s sin introduced imperfection and suffering. Even Ophthalmosaurus, deep in the sea, suffered because of human sin. Thankfully, God has given us a solution for human evil in His Son, Jesus Christ.

Prayer:
Dear Father, I thank You for giving me Your Son’s victory over sin, death and the devil. In Jesus’ Name. Amen.
Notes:
“My, What Big Eyes You Have,” Discover, 1/00, p. 28. Photo: Ophthalmosaurus skeleton found in Peterborough, England. Courtesy of Captmondo. (CC-BY-SA 3.0) 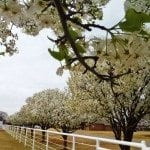 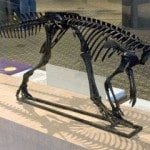