[Originally published as Age of the Earth]

For in six days the LORD made heaven and earth, the sea, and all that in them is, and rested the seventh day: wherefore the LORD blessed the sabbath day, and hallowed it. Exodus 20:11

Many Christians find it difficult to believe that the universe and the earth are only about 6000 years old. After decades of assault from all sides by evolutionists touting that billions of years of evolution are well-established scientific fact, Christian scholars, intimidated by the prospect of appearing uneducated while at the same time desiring to uphold the veracity of the Bible, seek compromises that attempt to “shoehorn” evolution into the simple text of the creation account recorded in Genesis.

Several of the compromises exist today even though solid biblical and scientific scholarship has shown them to be false. The Gap Theory,¹ for example, attempts to squeeze billions of years between verse 1 and verse 2 of Genesis 1 supported only by vivid imaginations and extra-biblical Jewish writings and traditions but offers zero biblical backup.

The Day-Age Theory mis-translates the normal meaning of “day” into indefinitely long periods of time. The Day-Age Theory, when examined carefully and critically presents several problems. Then there is Theistic Evolution that makes out God to be some cosmic tinkerer or experimenter as if He could not get it right the first time.

Other compromises probably exist, but recently I heard a new one. Someone wrote in with the perfect solution to the age of the earth problem. He said:

I believe that the earth is young, 6000 years old, but when I look at Genesis 1: 9-10, I see that what God called the earth is DRY land, not the whole planet. In other words, it is the DRYNESS of the land that is sticking up above the surface of the seas that God had just made that is young or new or 6000 years old. This isn’t my opinion, the Bible describes this. So verses 1 and 2 plus Day 1 and Day 2 need to be interpreted using what Moses says the earth is.
So you see trying use dates given by dating techniques to work out how old the ‘earth’ is a waste of time. I personally doubt that it would be possible to date the age of anything. This is because I think anything God makes would always be ‘as new’, until we get to when sin occurred here and then the flood. Using the context approach, entirely within chapter one, it is easy to see what ‘heaven’ is as well. The universe was made instantly by God’s word for sure, but that wasn’t Moses’ focus in Genesis. Another question to ask using the context approach is, ‘Why did God do what He did in Genesis One, the climax of which is Adam and Eve?

What the writer suggests is that the first two days were long periods of time – millions or billions of years, but the appearance of land on the third day is the starting point for counting the age of the earth. I can commend him for taking a hard look at Scripture, however, his disadvantage, it appears, is that he is relying strictly on the English translation of the Bible.

The original language, Hebrew, makes things very clear. The Hebrew word for “day” is yôm. Yôm, in the Old Testament nearly always refers to a normal 24-hour day, especially when it is associated with an ordinal number: first day, second day, third day, etc. If that were not clear enough, God clearly defines what a day is: “And the evening and the morning were the first day.” (Genesis 1:5). So, one cannot add extensive periods of time to the creation account without doing harm to the text.

Genesis 1:9-10 is another place where the English language fails to translate the Hebrew precisely. In my King James Bible, the word “land” is in italics meaning that the word was inserted in the text for clarity to the English reader. Literally, the phrase should read, “let the dry appear: and it was so. And God called the dry Earth.” (vv. 9-10).

The Hebrew word translated “earth” is ‘erets, and it can mean soil, ground, land (as in a plot of land or as a region like “the land of Egypt), and in a greater sense, the planet Earth. Context determines the meaning, which makes me wonder why the translators capitalized the word “Earth” when the context is referring to the “dry land” and not to the entire planet. The conclusion that it is only the “dryness” that is 6000 years old contradicts the definition of yôm given in Verse 5 (and the rest of Scripture).

Reading in its normal context, giving the words their normal meaning, the creation account recorded in Genesis 1 clearly states that God created the universe, the earth, and everything upon the earth in six 24-hour days. One must either accept that or reject it, but woe to them who attempt to add to or take away from that Word to make it fit the whims of sinful men (Deuteronomy 12:32; Revelation 22:18).

Since the writer was convinced that the 6000-year age of the earth started with the appearance of dry land, I did not expound any further on the age of the earth. However, someone may still doubt since “experts” in the field of anthropology place the beginning of human history between 8000 BC and 5000 BC with “civilization” beginning around 3000 BC.

Where do we get our tale of years?

According to biblical chronology, creation happened around 4000 BC, and man was “civilized” from the beginning. Many biblical scholars question this date because they fear appearing ignorant among the “experts.” The Bible presents a straightforward chronology in the “begats” cited in Genesis 5. Biblical scholars that doubt the accuracy of this chronology suggest that there may be gaps of hundreds or even thousands of years in these generations. 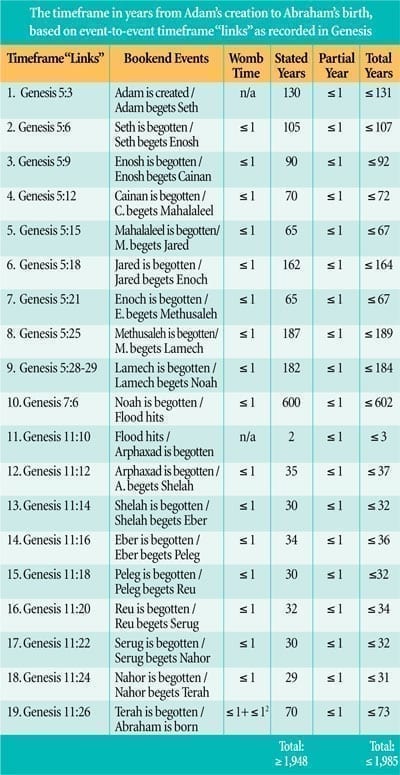 Add to these the genealogies recorded in Genesis 11 (included in the table above), and we learn that Abraham was born between 1,948 to 1,985 years after Creation or around 2018 BC. The year of Abraham’s birth is pretty well established +/- 100 years, so given the chronology recorded in Genesis, all of Creation is not much more than 6000 years old.

Of course, many will argue that, but their argument is against Scripture.

Personally, I would be careful about challenging God on the accuracy of His Word. To question what we do not understand is one thing. To deny the veracity of God’s Word is something else altogether. According to Scripture, the Earth is only about 6000 years old. 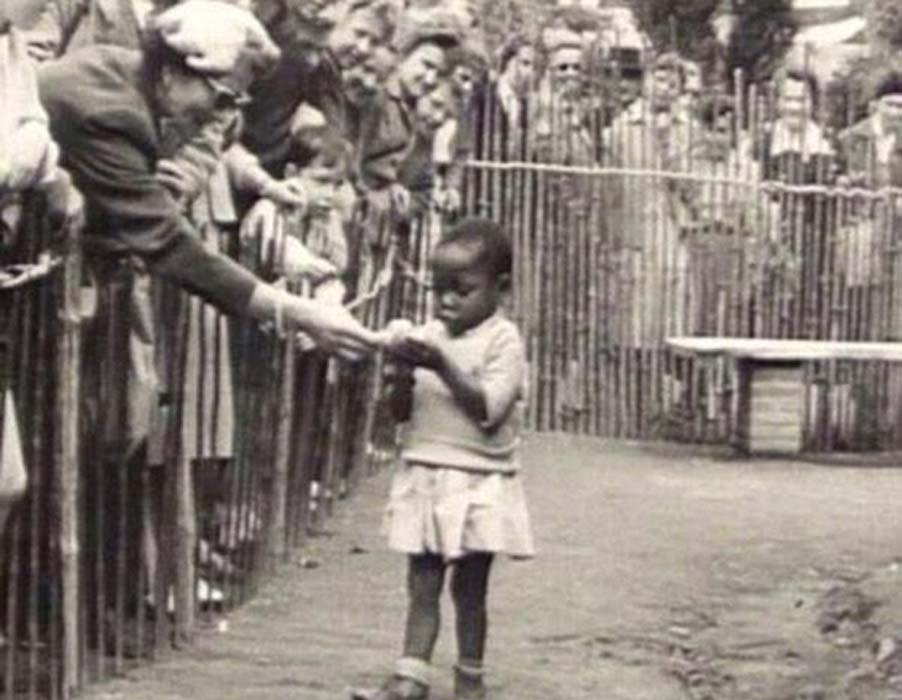 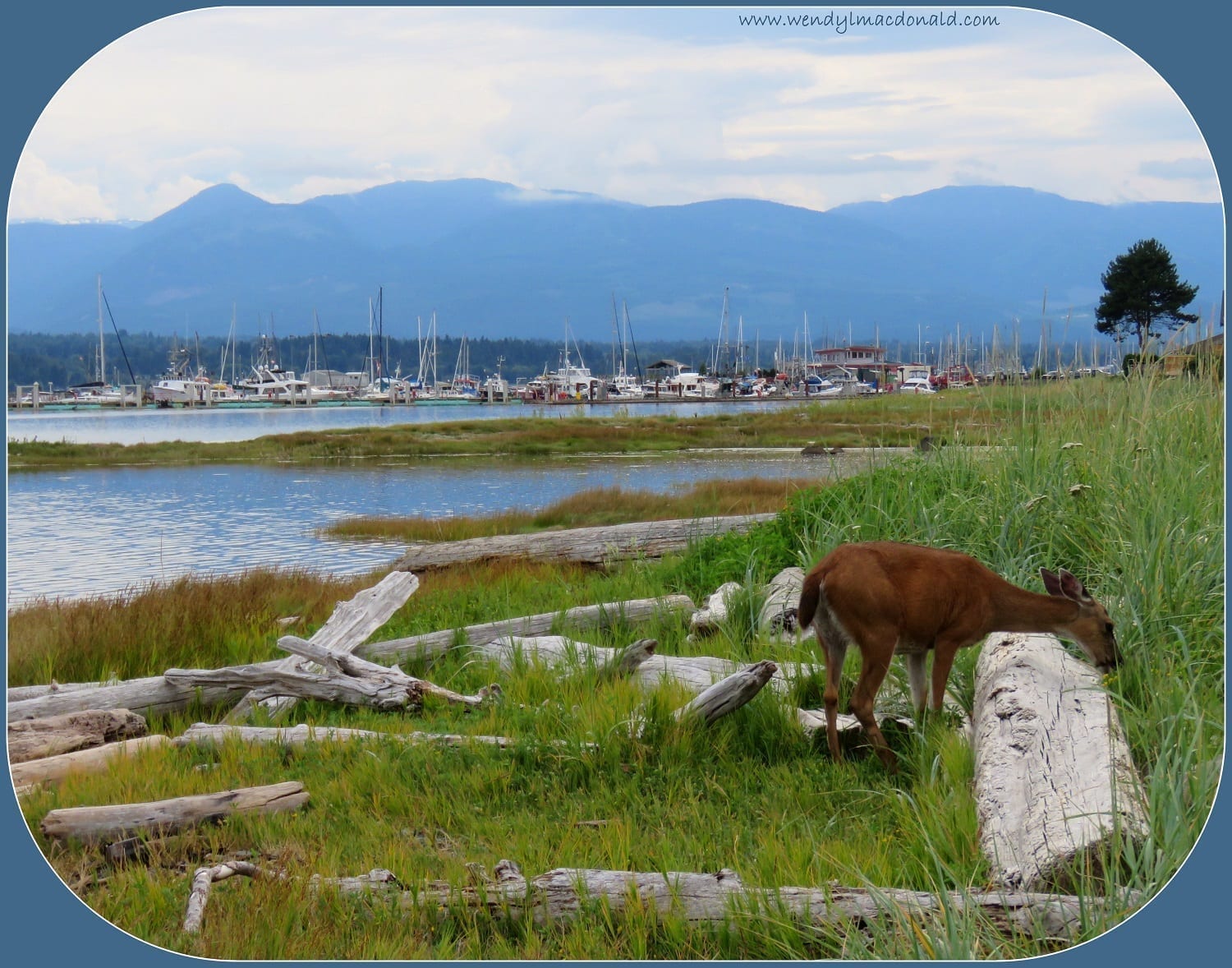