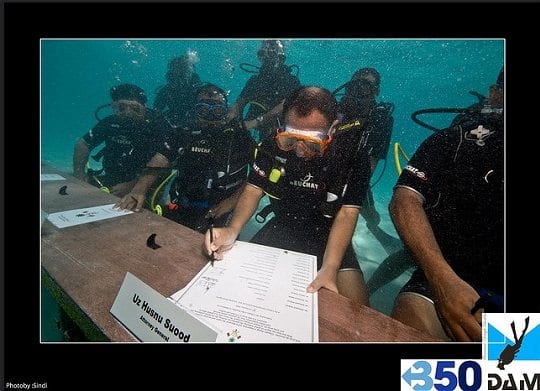 This is a picture of the Maldives cabinet meeting that took place on October 17th, 2009.

On October 17th, 2009, the cabinet of the Republic of Maldives held a meeting underwater. Outfitted with scuba gear and using hand signals to conduct the meeting, they signed a document calling on all countries to reduce their carbon dioxide emissions. Why would they do such a thing? The average elevation of their country is a mere 1.5 meters above sea level, making it the lowest-lying country in the world. Thus, they consider themselves the most at-risk nation when it comes to rising sea levels. Since many think that human-produced carbon dioxide is warming the planet and contributing to sea level rise, they wanted to make it clear that if the world doesn’t do something to curb emissions, their island nation could soon be underwater.

It is well known that sea levels have been rising since the end of the 1700s 1, but we don’t know how much of it is caused by human-induced global warming and how much is part of the earth’s natural climate variability. Some claim that sea level rise has accelerated due to human-induced global warming, while others claim that it has remained fairly constant for the past 100 years or more.

Hopefully, more research will allow us to get a better handle on how much of the rise in sea level is natural and how much (if any) is caused by human activity.

Nevertheless, let’s grant the Republic of Maldives its assumptions. Let’s say that rising carbon dioxide levels are heating up the planet, melting its ice reserves. This is causing sea levels to rise, and as a result, nations like the Maldives are at risk. They could literally be underwater if something doesn’t change soon. There is a serious problem with this scenario. The Republic of Maldives is made of a collection of atolls, ring-shaped coral reefs that can form lovely islands. Coral reefs, of course, are made of living organisms (corals) and their remains. We know that living organisms respond to changes in their environment.

We now know that the corals which form atolls respond to rising sea levels by raising the level of the atoll.

To investigate how coral atolls are affected by rising sea levels, researchers from the University of Auckland and the University of New South Wales studied islands around the Funafuti Atoll, which holds the island nation of Tuvalu. The researchers chose to study these particular Pacific islands because they have experienced rapid sea level rise at a rate of about 5.1 mm per year over the past 60 years. In other words, they have seen the sea level rise nearly a third of a meter in the past three decades. If rising sea levels threaten any coral atolls, it should be these.
What did the researchers find? Here’s what they say in their paper: 2

Despite the magnitude of this rise, no islands have been lost, the majority have enlarged, and there has been a 7.3% increase in net island area over the past century (A.D. 1897–2013). There is no evidence of heightened erosion over the past half-century as sea-level rise accelerated.

How is this possible? The corals that make up the atolls have responded by building the reef higher. This, of course, makes complete sense. Corals like to live in shallow water. That way, they can get a lot of sunlight to support the photosynthetic organisms with which they have a mutualistic symbiotic relationship. As sea levels rise, the coral reef rises in response. This, of course, makes the island bigger, not smaller.

Now this isn’t the first scientific paper to demonstrate that coral islands are not threatened by rising sea levels. In 2010, two researchers studied 27 atoll islands in the Pacific and found that 43% of them had remained stable in size, while another 43% had actually grown. 3 Once again, the researchers attributed this to the response of the corals that form the atoll.

Will these scientific results keep island nations like the Republic of Maldives from pulling publicity stunts like the one pictured at the top of the post? I doubt it. Unfortunately, science plays little role in the public debate surrounding global warming. 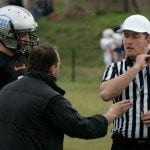 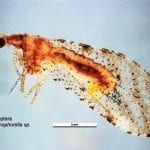