[Originally published as Crinoid Fossils: Evidence of Millions of Years or the Global Flood?]

Broken pieces of crinoid fossils can be found around the globe and throughout the earth’s strata. They are found from the bottom of the Grand Canyon to the top of Mount Everest, from the Arctic to Antarctica, making crinoid stem pieces one of the most prevalent fossils.

Today crinoids continue to thrive in the depths of the oceans, giving them the title of a “living fossils”. Though not a flower, their common name is sea lily due to their appearance. They are actually more like anchored sea stars that use their feathery arms to catch the food which floats past.

The fossil pieces also have a common name – Indian beads. With their cylinder shape and center hole, they were easily sewn on moccasins and clothing as decorations. Although the broken pieces are most prevalent, complete crinoid fossils have also been found. The most fascinating finds are the complete fossils which are attached upside-down to driftwood.

For those who accept the reality of the global flood, finding pieces of sea invertebrates is what we expect. It is the abundance of pieces and the complete fossils, found in the middle of the geological column, which are a bit of a puzzle. There are strata made entirely of huge mats of broken crinoids cemented together. In other places, the pieces are more scattered throughout the limestone.

Although rare, complete crinoids have been found in Wisconsin, Illinois, Indiana, Ohio, and Kentucky.  These fossils look as if a field of sea lilies had suddenly, yet gently, been buried by mud.

Some geologists think there are too many crinoid fossils to have all come from organisms living in the pre-flood ocean, and I would agree. But this does not mean millions of years are required to explain the great number of crinoid fossils seen today. The mystery clears when these facts are considered:

Like a frog that lives as a tadpole before becoming a frog, many ocean floor creatures live as tiny larvae (zooplankton) swimming at the surface before sinking to the sea floor and beginning their adult life. So, during the inundating flood stage, while the pre-flood adult crinoids were being destroyed and buried, their offspring were surviving at the surface as larvae.

During the global sea phase, some of the pre-flood larvae would have attached to the abundant driftwood, while most would have sunk to the new ocean floor. This second generation of crinoids became reestablished on top of the layers of sediment that were laid during the inundating phase.

During the uplift and retreating phase, some strata were lifted miles high, and thus we find crinoid fossils on the Himalayas and Mt Everest. But usually, the stratum from uplifted mountains was eroded into the valley below.  As the water drained off the newly formed continents, great amounts of sediment were eroded and relayed, forming new strata. Some of the re-established crinoids, along with the other seafloor life, were buried alive, becoming complete fossils, but most were destroyed, and their pieces scattered throughout the new layers.

The location of the complete crinoid fossils is highly interesting.

When one considers how the prairie states of North America seem to have a double portion of sediment while the Canadian Shield to the north is devoid of most sediment, it almost appears as if the strata from the Canadian shield were eroded onto these prairie states. It seems as if as the shield uplifted, the sediment with its sealife was washed off, becoming a huge mudflow that formed layer upon layer of fossil-rich limestone on top of the strata which formed during the inundating stage.

This is easily seen in the Cincinnati, Ohio area, the stratum of which can be compared to the landslide, ash, mud, and pyroclastic flows that quickly filled the Toutle River valley adjacent to Mount St Helens. As the geological events of Mount St Helen’s eruption demonstrate, fast-moving, water-saturated sediment can quickly form multiple layers of thin strata. So, with the entire globe being an ocean covered by millions of carcasses, there was ample space and food for the growth of all the crinoids found as fossils today.

The global flood remains the best explanation for the existence of crinoid fossils.

The following links are very informative yet secular sites with great pictures and facts, but wrong interpretations and date assumptions: 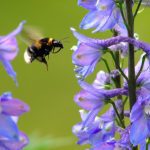