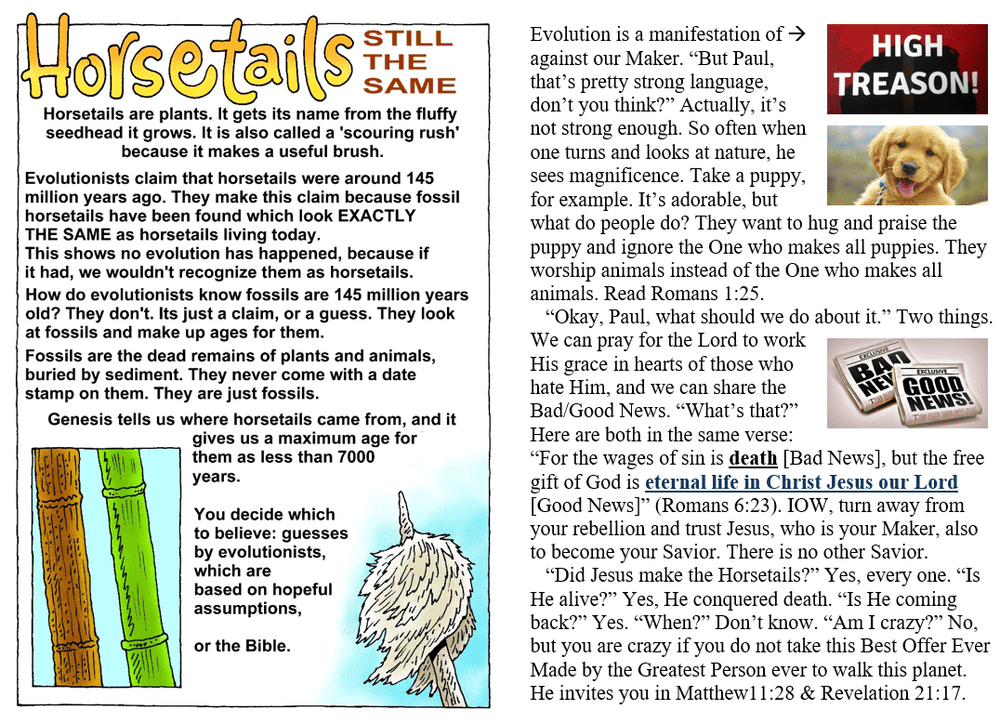 This infographic article is the collaborative work of Richard Gunther and Paul Humber, long time biblical creation advocates. Gunther has been tirelessly making images like this for years now, offering bite-sized introductions to fascinating evidences of God’s genius.

Humber is strongly interested in social issues such as the value of human life and is faithful to his Seventh Day Adventist roots theological framework including a strong focus on biblical creation.

Richard Gunther has a wealth of cartoons available at RichardGunther.org.

You can see Humber’s many articles and videos on his website, CR Ministries.

Horsetails Still the Same
[Richard Gunther] Horsetails are plants. It gets its name from the fluffy seedhead it grows. It is also called a ‘scouring rush’ because it makes a useful brush.
Evolutionists claim that horsetails were around 145 million years ago. They make this claim because fossil horsetails have been found which look EXACTLY THE SAME as horsetails living today.
This shows no evolution has happened, because if it had, we wouldn’t recognize them as horsetails.
How do evolutionists know fossils are 145 million years old? They don’t. It’s just a claim, or a guess. They look at fossils and make up ages for them.
Fossils are the dead remains of plants and animals, buried in sediment. They never come with a date stamp on them. They are just fossils.
Genesis tells us where horsetails came from, and it gives us a maximum age for them as less than 7000 years.
You decide which to believe: guesses by evolutionists, which are based on hopeful assumptions, or the Bible.

[Paul Humber] Evolution is a manifestation of high treason against our Maker. “But Paul, that’s pretty strong language, don’t you think?” Actually, it’s not strong enough. So often when one turns and looks at nature, he sees magnificence. Take a puppy, for example. It’s adorable, but what do people do? They want to hug and praise the puppy and ignore the One who makes all puppies. They worship animals instead of the One who makes all animals. Read Romans 1:25.
“Okay, Paul, what should we do about it?” Two things. We can pray for the Lord to work His grace in hearts of those who hate Him, and we can share the Bad/Good News. “What’s that?” Here are both in the same verse: “For the wages of sin is death [Bad News], but the free gift of God is eternal life in Christ Jesus our Lord [Good News].” Romans 6:23 IOW, turn away from your rebellion and trust Jesus, who is your Maker, also to become your Savior. There is no other Savior.
“Did Jesus make the Horsetails?” Yes, every one.
“Is He alive?” Yes, He conquered death.
“Is He coming back?” Yes.
“When?” Don’t know.
“Am I crazy?” No, but you are crazy if you do not take this Best Offer Ever Made by the Greatest Person ever to walk this planet. He invites you in Matthew 11:28 & Revelation 21:17. 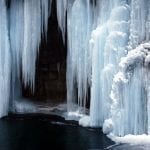