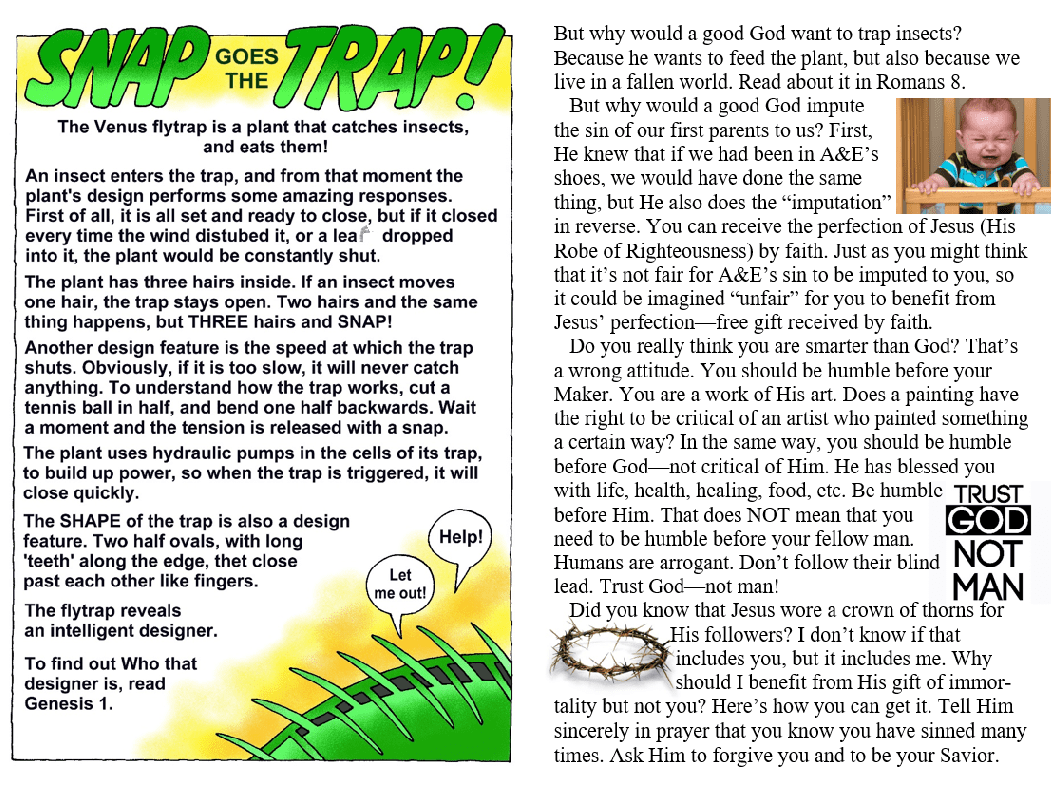 The Venus flytrap is a plant that catches insects and eats them!

And insect enters the trap, and from that moment the plant’s design performs some amazing responses. First of all, it is all set and ready to close. But if it closed every time the wind disturbed it, or a leaf dropped into it, the plant would be constantly shut.

The plant has three hairs inside. If an insect moves one hair, the trap stays open. Two hairs, and the same thing happens, but THREE hairs and SNAP!

Another design feature is the speed at which the trap shuts. Obviously, if it is too slow, it will never catch anything.

To understand how the trap works, cut a tennis ball in half, and bend one half backwards. Wait a moment and the tension is released with a snap.

The plant uses hydraulic pumps in the cells of its trap, to build up power so when the trap is triggered it will close quickly.

The SHAPE of the trap is also a design feature. Two half ovals, with long ‘teeth’ along the edge, that close past each other like fingers.

The flytrap reveals an intelligent designer.

To find out Who that designer is, read Genesis 1.

But why would a good God want to trap insects? ~Paul Humber

Because he wants to feed the plant, but also because we live in a fallen world. Read about it in Romans 8.

But why would a good God impute the sin of our first parents to us? First, he knew that if we had been in Adam and Eve’s shoes, we would have done the same thing, but he also does the “imputation” in reverse.

You can receive the perfection of Jesus (his robe of righteousness) by faith. Just as you might think that it’s not fair for Adam and Eve’s sin to be imputed to you, so it could be imagined “unfair” for you to benefit from Jesus’ perfection—free gift received by faith.

Did you know that Jesus wore a crown of thorns for his followers? I don’t know if that includes you, but it includes me. Why should I benefit from his gift of immortality but not you? Her’s how you can get it. Tell him sincerely in prayer that you know you have sinned many times. Ask him to forgive you and to be your Savior.