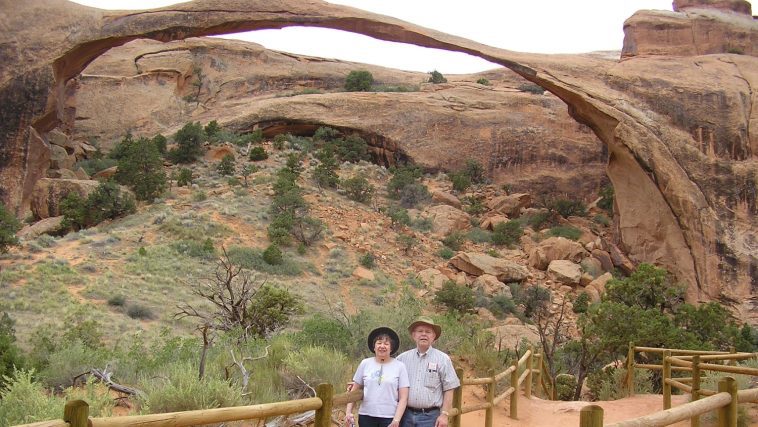 Landscape Arch, Arches National Park "In 1991 a 60-foot-long (18 m) slab of rock fell from the bottom of the arch. You can see remnants of this rock fall beneath the arch today."

[Originally published as Why Does the Earth “Look” Old?]

People ask me why I think the earth is less than 7,000 years old when it “looks” so old.

Foundationally the reason I think it looks less than 7,000 years old is because this is what the Bible tells me. But, I often answer the question by saying, “Well, yes 7,000 years is really pretty old. It is after all nearly 100 human lifetimes old.”

They usually respond, “But doesn’t it look billions of years old?”

My answer is that the only reason they would consider the earth to be older than, say, 7,000 years is that they have accepted the word of various deep-time authority figures. In addition, when I look at the surface of the earth, especially from an airplane, what it looks like to me is a surface that has experienced massive flooding.

Let’s consider in more detail the biblical creationist versus the secular differences in worldview regarding how old the earth “looks.”

The evolutionary view is that the crust of the earth has seen at least 4 1/2 billion years of working that can be seen through various erosional sections through the crust as well as via special deep drilling operations. On the other hand, the biblical creationist interpretation is that what we see is mostly the result of the Genesis Flood at the time of Noah about 4,500 years ago.

With this ratio, the old age divided by the biblical age is an even one million to one!

So, think about this: The distance from Seattle, Washington to Miami, Florida by automobile is about 3,320 miles. That distance is one million times longer than 17.5 feet. So to comprehend just how different the two interpretations are (regarding how old the earth looks), compare walking across your living room to driving from Seattle to Miami. You can walk across your room in just seconds, while most people would take over a week to drive from Seattle to Miami.

We can see here that the two worldview interpretations are not possible to reconcile on this point of the age of the earth!

Biblical creationists believe the Bible is true and there is no doubt there was a global Flood. Deep-time proponents, whether theistic or atheistic, cannot accept the global Flood. Logically, if there was a global Flood as described in the book of Genesis, then what we see on the surface of the earth can easily be interpreted as a result of that event. So, deep-time believers cannot accept the biblical cataclysm no matter the evidence, instead, they cling to uniformitarianism to explain the surface features of the earth.

So, biblical creationists have what they believe to be a valid historical document to limit the age of the earth. Secular evolutionists have the speculations of men. 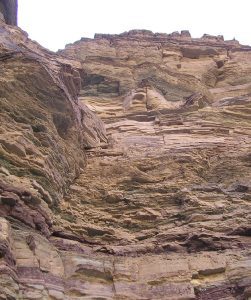 Consider these three famous locations in the United States: Grand Canyon in Arizona, Monument Valley on the border of Utah and Arizona, and Arches National Park in Utah.

The Grand Canyon looks to me like a cut through numerous layers of sediments that were laid down rapidly, similar to the layers that resulted from the eruptions at Mount St. Helens. It looks like the main canyon and the side canyons were cut fairly recently (say about 4,500 years ago) because of how vertical the canyon walls are and how little talus exists at their bases.

This cutting action looks like it happened rapidly and forcefully because the material that was eroded away can only be found in the Pacific Ocean. The Grand Canyon looks to be the result of lots of water over a short period of time, not a little water over millions of years. The Colorado River looks to be the result of the existence of the canyon not the maker of the canyon over millions of years.

Monument Valley has numerous beautiful buttes, mesas, and spires which have resulted in its name. North of Monument Valley in an area called The Valley of the Gods, are many more of these sandstone geologic formations. In these areas, there are no year-long rapidly flowing watercourses in existence to cause the obvious massive erosion that has left the monuments.

It looks to me like the buttes, mesas, and spires are leftover from a massive ancient flood where the softer materials were quickly eroded and washed out to the ocean basin. And, like with the Grand Canyon, there is not enough talus at the bases of the formations to indicate millions of years of slow erosion. I think it looks like most of the talus was formed not long after the Flood and that the rate of talus formation is slower today than it originally was.

The global Flood 4,500 years ago certainly looks to me to be the best explanation for what we see at Monument Valley and the Valley of the Gods.

According to the National Park Service, there are over 2,000 catalogued sculptured stone arches in Arches National Park that were formed over a period of 100 million years. Other sources say that these arches currently collapse at a rate of several a century. Some say as many as 100 a century collapse. Even if they only fall at a rate of a few a century, the deep-time interpretation cannot be true because there would be no arches left standing. Simple arithmetic provides us with this conclusion.

So it looks to me that these arches were in large part formed by massive amounts of water in a short period of time acting on the sediments while they were relatively softer than they now are. While erosion still continues in this arid Utah landscape it happens at a much slower rate than when the sediments were first laid down 4,500 years ago.

With biblical presuppositions, it is easy to “see” that while these geological features are “old” they are thousands not millions or billions of years old.

See original article for more on radiometric dating as part of the “old” equation. 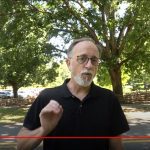 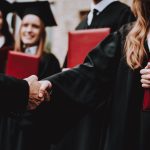