[Originally published in March 2021 as Are we all Martians?]

Evolutionists really struggle with the origin of life. They know they have to get life to arise naturally, apart from any outside force. However, abiogenesis on earth is incredibly difficult to arrange. James Tour is currently doing an excellent series on debunking abiogenesis on earth that I recommend you check out on his YouTube channel. However, Dr. Tour is not the only one who realizes abiogenesis on earth has not been explained. A recent pop-sci article has proposed the idea that life was seeded on earth from Mars.

While it may sound insane, there are a lot of people who are at least flirting with the idea that life arrived on earth from Mars. The article was inspired by a preprint paper written by Christopher Carr, a planetary scientist who works for Georgia Institute of Technology. Carr’s theory points to life arriving on earth as microbes onboard a lucky asteroid. While the odds of this are low, given the likelihood of an asteroid from Mars

Carr has a couple of arguments for it.

First, according to the evolutionary timeline, life on earth evolved while the earth was still covered in deep water. This would make abiogenesis on earth difficult. However, at the same time frame, Mars was supposedly much less aqueous but did have shallow standing water. According to Carr’s thinking, this would improve the likelihood of life arising on Mars.

His second line of reasoning comes from amino acids. Some of the amino acids used for life are used in preventing oxidation. According to the theory, the last universal common ancestor (LUCA) would have evolved these particular amino acids in response to the presence of oxygen. Yet the early Earth was supposed to lack oxygen and LUCA supposedly existed before oxygen was present in significant quantities on Earth. By moving LUCA’s origin to Mars, Carr and those who think the way he does hope to avoid this problem since oxidizing conditions supposedly developed there sooner.

There are, however, significant other problems with this view, even assuming that the Old Earth myth was correct. Presuming life somehow evolved on Mars and was transported here, we still have the question of why we see no life on Mars today? If life originated there, sure we would expect at least some of it to survive. Further, the likelihood of life arising on Mars probably is comparable to it arising on Earth — which is basically zero. However, even if life were to have arisen on Mars, it needs to get to Earth.

Getting to Earth from Mars is no easy task

The life must somehow be ejected from the Martian surface on a trajectory that will cause them to collide with Earth. This is not as easy as it sounds because even at great speed, it takes rovers 9 months or more to get from Earth to Mars. In that time, the Earth changes its position regularly as it orbits the sun. That means the Mars ejecta would have to literally lead its shot to hit Earth. Further, Earth and Mars are not always well aligned to even take the shot.

Even supposing Mars could line up its shot perfectly so that the asteroid would hit Earth, there are other problems. First, whatever process produced the ejecta would have to fire it upward fast enough for it to pass escape velocity. The Martian escape velocity is not insignificant. Further, the life forms would have to

Life arising on Mars might solve one or two problems for the evolutionists but it creates about a half dozen more in the process. Trying to argue for life coming to Earth from Mars is simply a recognition that life could not form on Earth and an attempt to move the problem elsewhere.

In other words, it’s a rescue device.

Unfortunately, it’s a rescue device that creates more problems than it solves. I do not expect it will gain much traction in the evolutionary community (unless the latest Mars rover finds something that can be interpreted as evidence of life), but I doubt it will ever completely go away either, given the problems with abiogenesis on Earth. 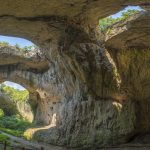