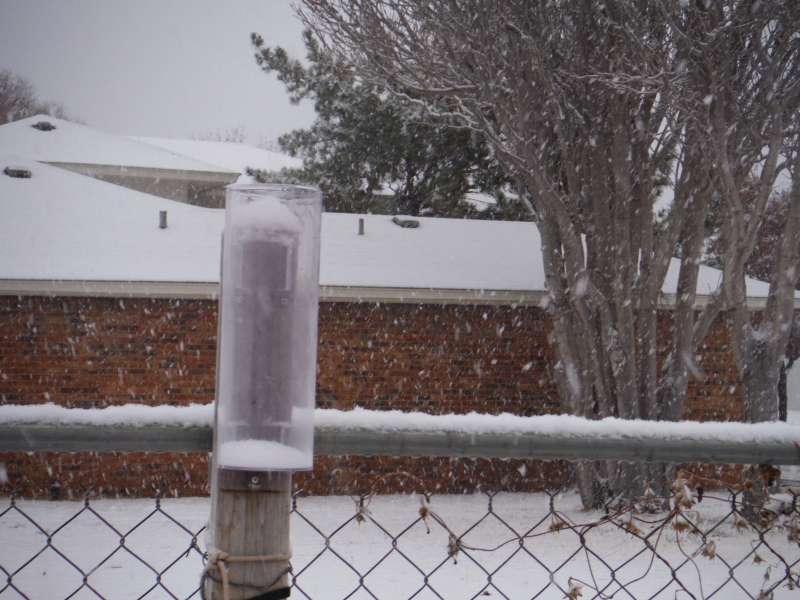 This morning I watched as the sunrise elusively sparkled off innumerous tiny crystals in the thick, pure-white layer of snow that draped everything in sight.  Idealistic winter scenery like that is not exactly an every-day view of God’s creation in my great state of Texas, so I usually enjoy seeing the way snow brings beauty to the dead landscape.   Snow, sleet, and freezing rain (all of which officially classify as frozen precipitation) can be very mysterious and difficult to predict weather.  One challenging thing about this frozen coating is trying to measure how much fell in a particular place.  It’s easy to get a somewhat accurate rainfall measurement even with just a simple backyard rain gauge – all you have to do is read the measurement marks on the gauge to know you got about half an inch.  Figuring out how much snow you got is a totally different story because it’s “fluffy” ice that melts down into a much smaller amount of water, and you can measure both how deep the fluff is (what you typically hear the weather man talk about) and how much water it will give (the “snow/water equivalent” that is rarely talked about).

Getting an accurate measure of snowfall is important in many places to predict flooding (when it melts), road safety, drought, farming conditions, and other potential hazards.  I have enjoyed sending daily rain, snow, or ice measurement reports to an independent national weather network, called the “Community Collaborative Rain, Hail, and Snow Network” (or “CoCoRaHS” for short).   My rain gauge that I use for these reports works a little differently from a typical garden gauge and very similar to the professional gauges used by the National Weather Service (the only differences are that mine is half the size and made out of a durable plastic instead of metal).   It has three parts: a big four-inch diameter outer cylinder (looks like a really big cup), a thinner inner cylinder with markings to a hundredth of an inch, and a funnel that directs the rain to the inner cylinder.

When measuring snow and ice, I take the funnel and small inner cylinder inside (they just get clogged up with snow if you leave them out) and just catch the snow in the outer cylinder.    Inside, I melt the snow in the gauge by adding a known amount of hot water (I just measure some in the inner cylinder), then measure the melted snow.  Of course, then I have to subtract the measurement for the water I add to find the final number of how much “snow/water equivalent” was in the gauge.

Of course, most people would give me a very confused look it if I told them that I got “0.09 inches of snow/water equivalent” when they remember stepping in snow that was over an inch deep.  To get the snow depth, I had to find a clear area in my yard that isn’t blocked by trees or in a corner where snowdrifts form to put my “snow board”.   My “snow board” is really a white cutting-board that I put out on the ground before the snow falls so that I can have a solid surface to know where the snow ends (grass can mess up snow depth measurements and make them seem deeper than they really are).   Since wind can throw off the snow measurement in the gauge, I also use my snow board to take a “core sample” of the snow.  In an idealistic snowfall like today, I just push my outer cylinder through the snow until it hits the snowboard and flip the snowboard over so that a perfect circle falls into the gauge.  Then I get to do the same melting and measuring routine on the core sample that I did previously on the snow I caught in the gauge.

That’s the basics of how to measure snow and ice!  Although I don’t endorse all of the things CoCoRaHS supports, it’s a great way to learn about and contribute to the collection of scientific data – I would especially recommend it to home school families (more about CoCoRaHS and this type of rain gauge here)  While we do what we can to try to measure snow and ice, God is the One in control of it all, giving us the moisture we need (though do not deserve!)

“God thundereth marvelously with His voice; great things doeth He, which we cannot comprehend.  For He saith to snow, Be thou on the earth; likewise the small rain, and the 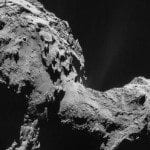 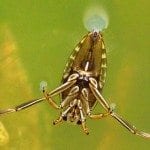