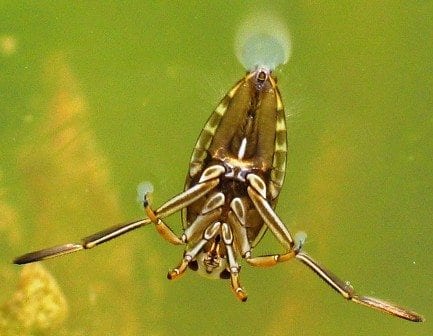 “For the invisible things of him from the creation of the world are clearly seen, being understood by the things that are made, even his eternal power and Godhead; so that they are without excuse:” Romans 1:20

The familiar little insect known as the water boatman is a marvel of engineering design. About an inch long, it swims on its back on the surface of the pond using two of its legs that are extra long and have little paddles on the end, just like the oars of a boat. Anyone who has tried swimming on his back knows how difficult it is to see where   he is going, but not the water boatman. His eyes are especially placed for perfect sight while swimming on his back.

As mentioned, the boatman is an insect so, of course, it does not have gills like a fish, yet he spends a lot of time under water. How does he do this? Well, his Creator gave him the ability to breathe through his tail that he sticks out of the water just like a snorkel tube. There are tiny hairs that keep the water out of this tube while he draws fresh air in to refill his air tanks for another dive. Those tiny hairs also tell the boatman whether a nearby movement in the water is something that would threaten him or something that might be good for lunch.

Surely, the specialized features of this little insect could not have gradually developed by trial and error but are evidences of superb design and a master Designer.

Prayer:
Dear Lord, even though the creation has been scarred and damaged by sin, its beauty and wonder is still marvelous to behold. For this I thank You as I look forward to seeing the New Creation. In Jesus’ Name. Amen.
Notes:
Photo: Water boatman. Courtesy of Holger Gröschl. Licensed under the Creative Commons Attribution-Share Alike 2.0 Germany license. 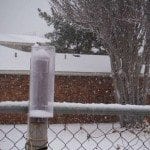 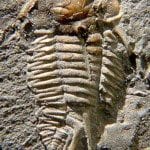