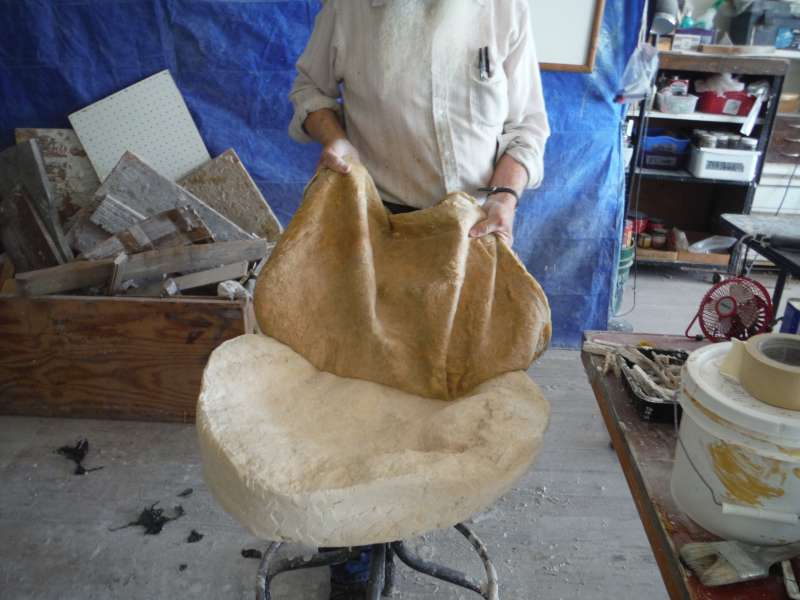 The inner rubber mold being pulled away from a replica of a dinosaur footprint fossil. Photo copyright Sara J. Bruegel, June 2015

The latex rubber part of a mold being pulled from a replica of a fossil dinosaur footprint. Photo Copyright Sara J. Bruegel, June 2015

The sweat gathered on my furrowed brow as I gently – but firmly – tried to roll the extremely delicate rubber sheet off of the rough stony object. The intensity built as I started to get a good section moving that might be enough to get the rest of the sheet off . . . but, the closer I got to the most important parts, the more it began to weaken until suddenly it tore. Hoping it was still salvageable, I tried starting on another side, but found this part was much too sticky to work.   My heart began to sink. After continual tearing and sticking, especially in the critical points, I gradually reconciled myself to the fact that this particular fossil dinosaur footprint mold we had made was simply not strong enough to be used. I tried everything I could, but the latex rubber mold was just too thin to be pulled off the first replica we tried to make with it. We had known this mold was a long shot, but it was still sad to see the work of our hands become useless and destroyed. So goes a mold making tragedy.

Last week I wrote about my recent experience making molds of some of the fossil dinosaur footprints in Glen Rose, Texas, as well as some of the basics of how mold making works and why it’s important (read that article here).   The main point of making a mold of a fossil is to make replicas of that fossil. No, the replicas are not the “real-deal”, and though they don’t cost as much as the real fossil, they are still quite valuable and useful. Many of the popular dinosaur bone displays in museums are replicas. The real fossils are often kept where they can be better protected and used for scientific research and the replicas can be displayed, copied, and seen in many different places at once. The point of a replica is to make the fossil known.

Hold on to that idea: the reason we make replicas (called casts) is to make known the fossil it’s molded to look like. That sounds pretty similar to the reason why people were originally created: we are made in His image to bring glory to our Creator God, knowing Him and making Him known. Sin corrupted that originally perfect reflection of the image of God in mankind. But, since Jesus paid the penalty for our sins, taking our punishment for us, we can choose to be a new creation in Him, reflecting the image of Christ and making Him known. Ideally, we want to be shaped and formed into the image of Christ, just like a replica is shaped and fashioned by the molds into the image of the original fossil.

Last week I mentioned that there are two parts of the mold – the flexible, rubber inner mold and the outer rigid, plaster “mother mold”. The flexible, detailed inner mold is like our character, beliefs, interests, and other “soft”, changeable aspects that mold us into who we are, hopefully reflecting the image of Christ and making Him known to those around us. The hard mother mold is like the unchangeable factors in our lives that mold us more generally, like the family a person is born into, his or her gender, and various other physical factors (e.g. ethnicity, eye color, etc).

Like in the mold making tragedy I mentioned at the beginning that ended up destroying the dinosaur footprint mold, sometimes there are “mold making” tragedies in our lives – ultimately all based in sin – that can mar the image of Christ that we are trying to reflect. Our “rubber molds” (that is, our character, convictions, etc.) can get warped or damaged. Trying to change or control the unchangeable factors in our lives is often like damaging the “mother mold” – it can have devastating effects on the inner mold and any replica that is made with that mold. A rubber inner mold is usually easier to fix than a damaged “mother mold”.   The moral of the molding story? Let God mold you and make you more into a reflection of the image of Christ, every day. From the tiniest detail of your life to the biggest unchangeable factors choose not to resist, but let Him have control. You are designed to mimic His image and make Him known to the world around you. 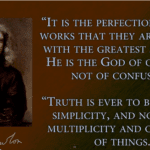 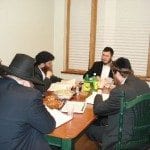