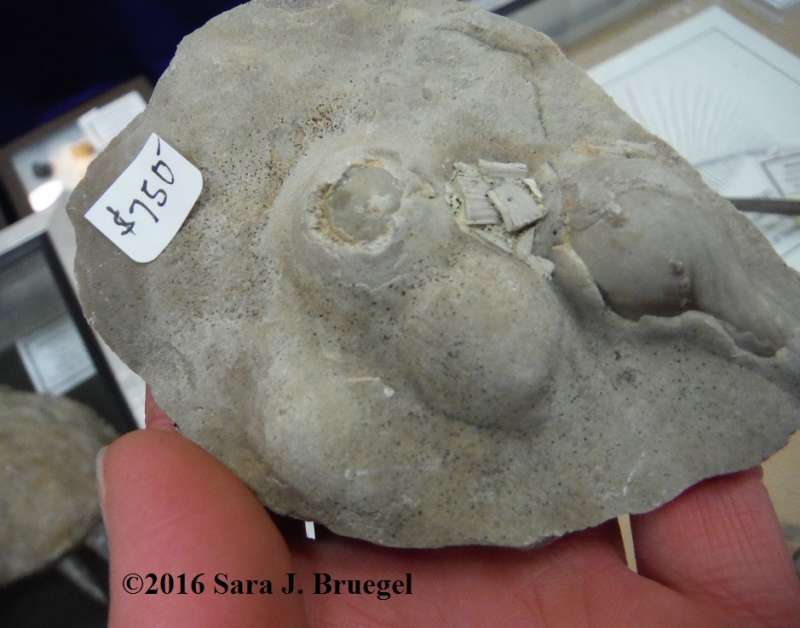 “May I hold it?” I asked, marveling at the two small objects in his hands.  The man placed them in my hands.  Gently, I rolled around the small, imperfectly shaped little ball.  It felt lighter than I had expected, almost as if it had been made of wax.  I was holding a fossil pearl and part of the oyster shell that went with it. The man traded me for another object –  this time several pearls were still inside the oyster, but the bump of the pearl was still clearly visible.

While I had certainly seen lots of fossil oysters and clams, scattered all over the ground at the dig site in Kansas, I had never really thought about fossil pearls.  One of the fossil pearls that I held was found near the region of Kansas where I have been digging in past years.  Walking along the surface of our dig sites, the ground is strewn with pieces of clams.  Often, a very large clam would be sitting on the surface.  On these large clam halves, one side is smooth, looking like more like a typical shell you would find on the beach, but the other side often has a very different texture.  This texture is actually made by a colony of small oysters that became fossilized with their host clam.

Let’s take a look at modern pearls forming in oysters before digging into the fossil pearls too deeply.  Oysters get their food by filtering tiny delicious tidbits (like algae) out of water.  Sometimes a small object gets stuck between the soft body parts inside and the shell, causing irritation.  Usually, it’s food or a parasite (not a grain of sand).  Our marvelous Creator designed the oyster with a special way of responding to this irritation.  After isolating the parasite, the oyster gently coats it with “nacre”, made of a special protein combined with calcium carbonate. Oysters continue to give that irritant one coat of nacre at a time, layer upon layer, slowly making it into the beautiful rounded object that we call a pearl.

Just like the minerals in clam and oyster shells get replaced and turned into rock during fossilization, the pearl can also become replaced, so that it is made of rock instead of the aragonite, or calcium carbonate, that we see in pearls today.  Sometimes the pearls can be completely replaced, but you can still see the rings made by the layering done by the oyster.   Other fossil pearls still have the same nacre that modern pearls do on the inside, and only some of the layers of the pearl are turned into rock.  Because they are replaced, most women (except the author) would probably not find a string of fossil pearls nearly as attractive as modern pearls.

Fossil bivalves (that fall under the same category as clams and oysters) can be found in some of the lowest and oldest rock layers of the world. They are found throughout the fossil record and in modern day.  Isn’t it interesting, that even in the oldest rock layers, these creatures were still basically the same as what we have today?  Yes, there are variations.  We see different sizes, shapes, and species, but they still had the same basic abilities and characteristics.  If the evolution and millions-of-years old earth models were true, why would these creatures suddenly appear, then stay basically unchanged through a supposed five hundred million years while everything else is theoretically evolving and getting better? Perhaps a better explanation is that God created oysters, clams, and other creatures with their unique features and ability to adapt, and they became preserved during different stages of the global flood.

Pearls, both fossil and modern offer a stunning illustration.  When someone or something irritating gets under your skin, you have some important choices to make.  It may be some kind of parasite of the heart – bitterness, hurt, selfishness or something else.  Like an oyster, our Creator has given you a very unique ability to control your thoughts and attitudes.  Instead of letting those “parasites” creep in and take over, you can choose to coat them with the love of Christ and truth from the Word of God. It may take time, but eventually, you will end up with a stunning treasure instead of a destructive disease.  Choose to be like the oyster today. 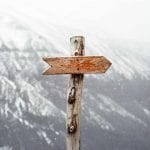 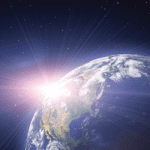