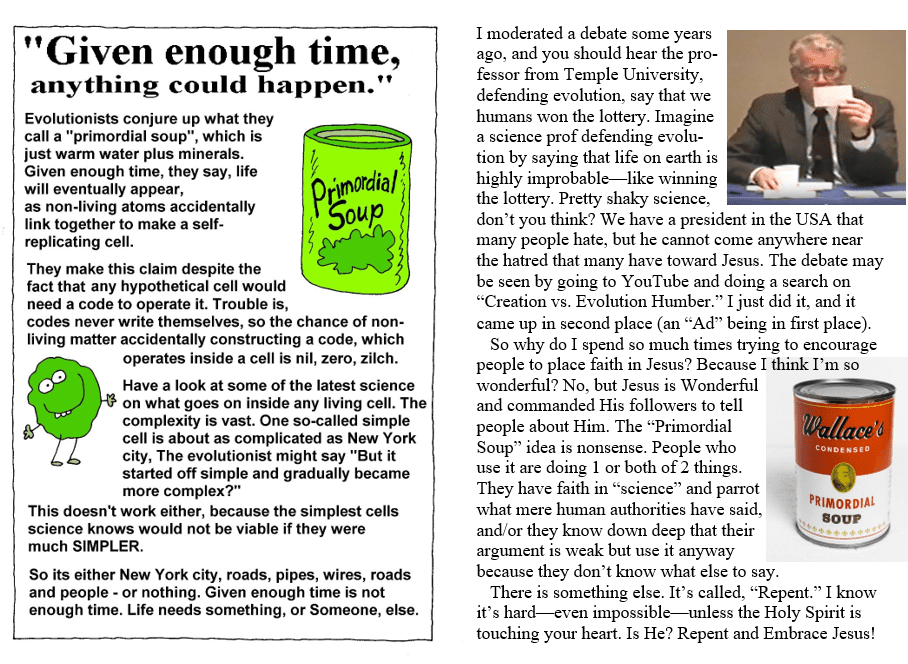 [Originally published as Shaky Science with slight editing by me]

“Given enough time, anything could happen.”

Evolutionists conjure up what they call a “primordial soup,” which is just warm water plus minerals. Given enough time, they say, life will eventually appear, as non-living atoms accidentally link together to make a self-replicating cell.

They make this claim despite the fact that any hypothetical cell would need a code to operate it. Trouble is, codes never write themselves, so the chance of nonliving matter accidentally constructing a code, which operates inside a cell is nil, zero, zilch.

Have a look at some of the latest science on what goes on inside any living cell. The complexity is vast. One so-called simple cell is about as complicated as New York City. The evolutionist might say, “But it started off simple and gradually became more complex?”

This doesn’t work either, because the simplest cells science knows would not be viable if they were much SIMPLER.

So, it’s either New York City—roads, pipes, wires, and people—or nothing. Given enough time is not enough time. Life needs something, or Someone, else.

I moderated a debate some years ago, you can find it by going to YouTube and doing a search for “Creation vs. Evolution Humber.”

You should hear the professor from Temple University, who defended evolution, say that we humans “won the lottery.”

We have a president in the USA that many people hate, but he cannot come anywhere near the hatred that many have toward Jesus.

So, why do I spend so much time trying to encourage people to place faith in Jesus? Because I think I’m so wonderful? No, but Jesus is Wonderful, and commanded his followers to tell people about him.

The “Primordial Soup” idea is nonsense. People who use it are doing one or both of two things.

They have faith in “science” and parrot what mere human authorities have said, and/or they know down deep that their argument is weak but use it anyway because they don’t know what else to say.

There is something else. It’s called, “Repent.” I know it’s hard—even impossible—unless the Holy Spirit is touching your heart. Is he? Repent and embrace Jesus! 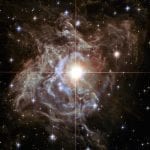