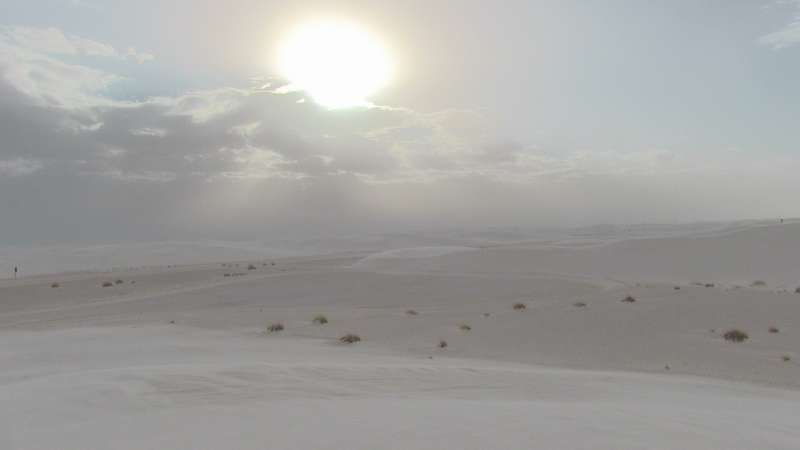 The ferocious, frigid wind whipped my hair all over the place as I attempted to run up the sandy hill. The soft, white sand kept on swallowing my bare feet in each step, making progress extremely slow. Once I did make it to the top, the sight of rolling white sand dunes under the stormy, blue-gray horizon was truly breath-taking. On my travels a few weeks ago, I had a chance to stop at White Sands National Monument near Alamogordo, New Mexico. It’s a stunning, wide open field of white sand dunes in the dessert. The white sand, in and of itself, has quite the story behind it.

This sand is white because it’s made of the mineral gypsum. Gypsum is a very dynamic mineral that is put to use in many different ways and in many different places. In homes, it’s often used in the sheetrock and texture of walls. Personally, I use it in plaster for field paleontology and in making fossil replicas (read more about that here). Gypsum is considered to be a type of “salt”, falling under the same category as table salt. Like table salt, it will dissolve in water, which is why large areas of gypsum sand, like we see at white sands, are rare. Usually gypsum does not gather in great sand dunes, and instead dissolves in rain water and flows into streams, rivers, and oceans. To understand why the area around White Sands is different, let’s go back to where gypsum comes from.

Traditionally in geology, gypsum and other salts are categorized as “evaporites” – they are said to have formed when water evaporates out of an area and leaves the salt behind, little by little over long periods of time. However, there are some pretty major problems with this idea. Two of these problems are that salt deposits are 1) practically pure and, 2) massive – spreading over large areas. Small scale salt deposits we see from evaporation are anything but pure – very unlike the deposits we see.

While there is still a lot of research that needs to be done in this area, there’s another scientific model that seems to fit the evidence better. In the “hydrothermal model”, large salt deposits like gypsum do not come from slow evaporation, but catastrophic flows of salt-lava underwater, coming from inside the earth. These super-heated salt-lava brines would fall under the category of the “fountains of the great deep” mentioned in Genesis 11 during the global flood.

Gypsum would have been deposited during the global flood, roughly 4500 years ago. At the end of the flood, the mountains rose, and probably continued rising for some time afterward. The way that the mountains rose around the area would have caused a lot of bending, pulling, and pushing of rock (plate tectonics – read more about that here), which created the Tularosa Basin where White Sands now exists. Rain and mini-floods after the global flood, at the time when the Earth was still having “after-shocks” and some ice-age conditions, would have dissolved gypsum and carried it down into the Tularosa Basin. With nowhere to go, a lake formed and later dried up, leaving gypsum trapped in the basin. This is how the sand itself came to be in this region. It doesn’t take millions of years to make white sand – just the right conditions. Next week, we will talk about the sand dunes and wind/desert geology deposits. 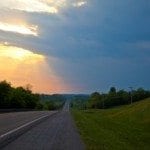