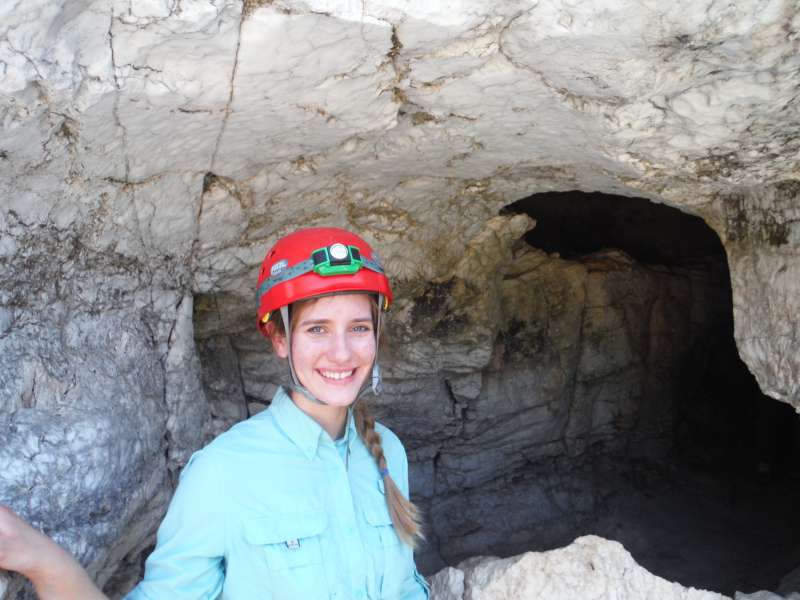 The author about to enter the cave at Parks Ranch Cave in New Mexico. Photo Copyright Sara J. Bruegel, 2015

Half excited and half dreading the cold, murky cave waters, I sat down on the wet cave floor and slid down the natural slide into the 55 F water.

I had gotten used to wading through the water up to my knees, but now we had reached even deeper waters. It felt like my stomach did a somersault, protesting the sudden cold as the water rose above my waist and the subtle rotten-egg smell of sulfur tingled in my nose. Childhood flashbacks of the times I tried to make a “swimming pool” and “water slide” out of the 4-foot deep backyard “barracks” (really a hole my brother made me dig with him) played through my head: that was just a muddy mess!

Back in the present caving adventure—soon the water was above my shoulders. Taking my caving helmet off to allow for more headroom in the tight air space between the deep water and cave ceiling, I gripped the guide rope and swam through the broad, dark room.

One of the things our adventurous group encountered most while caving at Park’s Ranch (located near Carlsbad, New Mexico) was water. We even had a bit of unintentional excitement with some of the water, as I related in the story last week (read the story here). I suppose it is a little obvious that a big hole in the ground would be likely to catch water, but with my background in geology I was rather fascinated with the water in the cave and what it had to do with the formation of all the different landforms of the area.

Karst is a type of landscape that is made by the dissolving of certain types of rocks like gypsum, limestone, and dolostone. These landscapes are known for their underground natural water drainage systems, caves, and sinkholes. Park’s Ranch is carved out of soft, white gypsum and doesn’t have the big stalagmites (ground) and stalactites (ceiling) like Carlsbad, which is carved out of limestone. While in Missouri that summer (more on that here), I got to see a few small caves which are part of the limestone/dolostone Ozark karst landscape.

You may have heard of the Rio Grande River – one of the most famous rivers of Texas and New Mexico. The Pecos is a smaller river that flows into the Rio Grande. The Black River, which flows through the gypsum karst plane and into the Pecos, is a little known river because it is often dry.

While the Black River is fed by springs and surface runoff, the waters usually get drawn in by karst features like sinkholes, caves, etc. Karst landscape features explain why so much water ends up in Park’s Ranch Cave today– especially after an unusually rainy season like much of the Texas/New Mexico area experienced earlier in 2015. But we haven’t even broached the topic of how the karst got here or how and when the cave was formed – all of that will have to wait until next week.

When it comes to learning science and any other life-journey the Lord takes you on, it’s best to take it one step at a time—in bite-sized pieces. The things we learn and experience today will prepare us for the next step.

So often I worry about the distant (and not-so-distant) future; how am I going to solve all these problems that I logically figure will probably come up?

The first time I entered those deep waters in the cave was a little scary, but after going through the first assages, the deeper, darker, colder waters ahead weren’t so bad. God prepares us for the next step just in time.

Like my caving stories, the Lord probably will bring you through deep, dark waters.  But you don’t have to worry about the deepest, coldest, darkest waters to come because He will probably bring you through a difficult passage where you can learn to trust your Guide before He brings you to the most difficult ones. 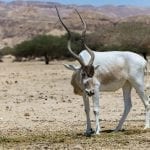 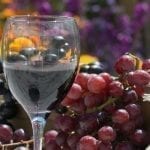