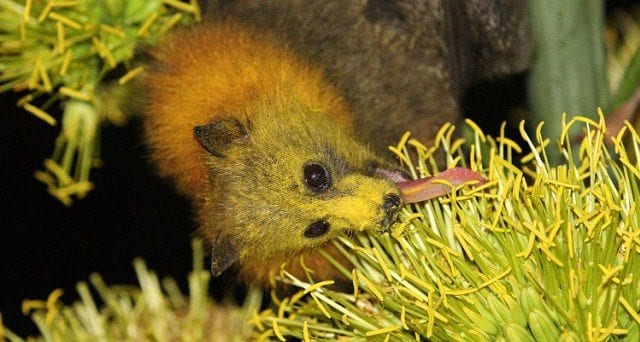 We all know about bats that eat insects at night. We know about the big fruit bats, and even (shudder) the vampire bat…

But did you know about the bats that help plants?

All kinds of plants rely on bats instead of bees to pollinate their flowers.

United States Department of Agriculture, “Over 300 species of fruit depend on bats for pollination.” These fruits include:

Many of these trees and flowers use scent, large size, and pale color to help the bats find them, but some use the bats’ own echolocation.

Have you ever visited a museum with a Whispering Gallery? You stand in front of a giant curved dish and whisper into it. Your friend stands at the far end of the room next to a matching dish and can hear you just fine. This works because the bowl shape of the dishes collect and focus the sound helping it travel long distances without losing much volume. 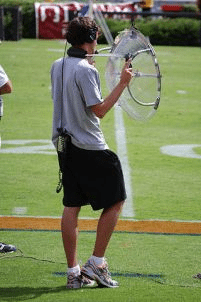 People used this technology to help them hear distant airplanes before the invention of radar.

Today we use smaller dishes in “parabolic microphones” [pair-ah-ball-ik]. Can you guess what the guy in the photo is doing? He’s recording what some players are saying during an American football game.

Other people use these microphones to catch distant sounds for the news (watch out, politicians, your mic doesn’t have to be on for your words to be recorded!).

I bet you can think of other times this would come in handy. Want to know what Mom and Dad are whispering about? Build yourself a spy microphone!

Of course, there are more sounds than just people talking. Lots of bird watchers use parabolic microphones to hear birds without getting close enough to disturb them.

But we were hardly the first to recognize the power of focusing sound.

You know how night flying bats find their way through the dark. They send out high pitched sounds and use their keen ears to hear the echos bouncing off things far and near.

Some bat-pollinated plants have a curve to their flowers much like those parabolic dishes making the sound bouncing back much stronger than usual. The bat knows that spot has something special meant just for bats and quickly locates the source of the extra sound.

Now for the Most Interesting Plant of All

The plants we’ve already looked at give the bats something to eat in exchange for their help spreading their pollen. Scientists have recently realized there is another service bats and plants do for each other.

Sometimes the jungle can be an exhausting place to live. When a bat wants a break it can be hard to find a spot to curl up their wings and just hang around. We’ve discovered there are some pitcher plants using sonar reflecting shapes to advertise themselves as a cool and comfy bat hotel.

Not all pitcher plants do this, even ones that look similar to us. Just one species we’ve studied so far had the precise shape needed to focus the sound back to a sleepy bat.

But you don’t need to fear for the bats. Although the pitcher plants are part of the “carnivorous plants” group, this one isn’t out for blood. It’s out for poo.

While the bat gets a good rest well above the insect digesting juices at the bottom of the plant, it clears its bowels. Lots of nutrient rich droppings fall into and around the plant.

Farmers around the world spend many hours carefully spreading manure on their fields to help their crops grow. These plants don’t have a human gardener caring for them, but they do just fine.

So, what does this tell us about nature?

The articles I’ve mentioned so far say things like this:

Discovery News: “The seemingly clever plants get something out of the deal too.”
“A large, meat-eating pitcher plant in Borneo has evolved a unique way to communicate with bats that it hopes to attract.”

Science Daily: “Researchers discovered that a rainforest vine, pollinated by bats, has evolved dish-shaped leaves with such conspicuous echoes that nectar-feeding bats can find its flowers twice as fast by echolocation. ”

Plants aren’t smart enough to know they are alive. There’s no way in the universe they are going to figure out something so complicated as the mathematical shape it requires to focus sound back to a bat. And that’s before figuring out how to change their DNA to get themselves to grow in that shape.

Let us praise and glorify our Creator God who cares about the pitcher plants and the bats. Jesus is the one smart enough to figure out the exact shape these plants needed to attract their bat friends. He deserves all the credit for this example of genius!

Are not five sparrows sold for two farthings, and not one of them is forgotten before God? Luke 12:6

Consider the lilies how they grow: they toil not, they spin not; and yet I say unto you, that Solomon in all his glory was not arrayed like one of these. If then God so clothe the grass, which is to day in the field, and to morrow is cast into the oven; how much more will he clothe you, O ye of little faith? Luke 12:27-28

Think a Parabolic Microphone would be a lot of fun? Some of the ones on the internet are remarkably affordable.

Bats.org.uk has a good article on Why Bats Matter opening with their importance as pollinators.

The National Wildlife Federation has a detailed article about bats as pollinators. It’s rather heavy on evolution, but well worth the visit (great pictures). 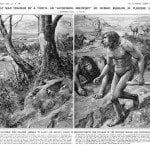 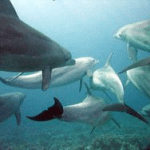