[Originally published as A Nutshell History of the World]

World history can evenly be divided into three segments of 2,000 years each: from creation to Abraham; from Abraham to Jesus; and from Jesus to the present. I realize that academic historians and anthropologists with Ph.D. degrees will disagree, but they have earned the right to be wrong; so I will acknowledge their opposition and move on.

Beginning with Genesis 1, the Bible records the creation in just six 24-hour days. Genesis 2 details the creation of man – Adam and Eve. Genesis 3 records the Fall of man and the first promise of Messiah. This event probably took place less than a month after creation. I come to this conclusion because God instructed Adam and Eve to be fruitful, multiply, and fill the earth (Genesis 1:28). Considering God’s assessment of His “very good” creation (Genesis 1:31), Adam and Eve were perfect human specimens and should not have had any trouble reproducing.

Additionally, a woman’s menstrual cycle lasts about 28 days. It takes 14 days for the ovary to release a ripened egg (ovum).¹ The ovum has another week where it is ready for fertilization. If not fertilized within that week, it will be sloughed off in the menstrual period, and the cycle begins again. Considering this, the Fall may have been less than two weeks after creation.

Genesis 6-9 records the depravity of man that brought God’s judgment upon the Earth through the Global Flood. Only Noah, his family. and all the animals that God brought to the Ark were saved.

The animals included dinosaurs, and the Bible does mention dinosaurs although not by that name. Sir Richard Owen first coined the word dinosaur in 1841. The King James Bible was published in 1611, more than 200 years before the word “dinosaur” was invented. Before that time, these creatures were collectively known as “dragons.” The Book of Job names two of these creatures, Behemoth and Leviathan (Job 40-41), whose description is unlike anything known to modern man.

The Flood lasted 370 days (Genesis 7:11; 8:14), based on a 360-day year. After the Flood, the Earth was still in turmoil with a lot of active volcanoes and much warmer oceans. These factors contributed to the Ice Age that followed.5 The Book of Job, considered by many Bible scholars as the oldest book in the Bible, speaks more about snow, ice, and cold than any other book of the Bible suggesting that the earth was experiencing the Ice Age at that time. Creation scientists believe the Ice Age lasted only about 200-400 years, but there was only one, not many as the secular scientists suggest.

Genesis 10 is called the Table of Nations. It records the descendants of Noah’s sons, Shem, Ham, and Japheth and where they settled around the world after their dispersion at Babel. Shem’s descendants ultimately led to the Lord Jesus Christ (Luke 3:36).

Finally, Genesis 11 records the Tower of Babel and the confusion of tongues/languages. This event is the origin of all the ethnic groups (not “races”) in the world. Neanderthals were among those that scattered at Babel. Recent scientific discoveries show that Neanderthals are/were 100% human. Genesis 11 also records the genealogy of Abraham through whom God would bless all the nations of the earth 2,000 years later. The rest of the Old Testament deals with the history and the future history of Abraham’s descendants.

The future history concerns the coming of Messiah to rule all nations from His throne in Jerusalem. The Old Testament records future history in two parts. At His first coming/advent, “He came to His own, and His own received Him not” (John 1:11). He was crucified, buried, but He rose from the dead after three days and ascended to heaven (Acts 1:9-10; Ephesians 1:19-23). From there we await His return—His second coming (John 14:1-3; Acts 1:11). At that time, He will fulfill the future history recorded by the Old Testament prophets concerning His reign on earth. The time of His second advent draws near. As there were six days of creation and a Sabbath day of rest (Genesis 1:1-2:3), so have there been six millennia of history, and we await the seventh millennium (Revelation 20:1-7) of rest where Messiah will rule the nations with a “rod of iron” (Psalm 2:9; Revelation 2:27; 12:5; 19:15).

At the end of the millennial reign of Christ, world history ends and eternity, for us, begins. Are you ready? See my page on “Securing Eternal Life.” 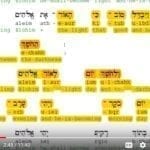