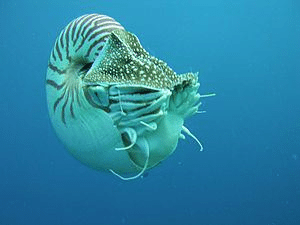 Nautilus from the side. Palau Micronesia.

Years ago my family went to visit the Shedd Aquarium in Chicago (one of my favorite places to see God’s creation). We’d been before, but this time it was quiet and we weren’t in a hurry. Back in a dark corner were some creatures I’d never expected to see, Nautiluses.

I knew what they were right away. I’d seen them in books before, but only in the “prehistoric” section. Now, I’ve never believed in evolution, but it’s clear many creatures hadn’t made it through the Flood of Noah’s Day alive. Here was one I’d thought was a goner swimming happily right in front of me -another Living Fossil.

From the fossil record we know the Nautilus sometimes got buried deep down, Uniformitarians say back to 500 million years ago. That’s pretty deep for a fossil of something bigger than a microbe. We also know they came in more varieties than are still alive today. Some say there were as many as 10,000 species once. Today there are 6.

When we have fossils to compare to, it’s fun to check how big a living creature used to get. It wasn’t easy to find info on the nautilus, but a similar looking creature, the Ammonite, has been found as large as 5′ 11″ across.

I did find one page from a collector saying he’s seen a fossil Nautilus “a little over three feet in diameter” or right at a meter across. Unfortunately, he didn’t get a picture at the school it was donated to and now they’ve lost it. He has personally found a fossil Nautilus 27 inches [68 cm] across, but the largest picture his page shows is only 14 inches [35.6 cm] across. Still cool stuff.

What we know about the living ones:

Every day, a Nautilus travels over 1,000 ft straight up and down. During the day, they hide down deep (up to 1,800 ft [550 m]) where there aren’t as many hungry mouths wanting to eat them for lunch. Then they rise up after dark to look for leftovers and small animals to eat in the reefs at about 300 ft [90 m] depth.

An adult Nautilus today can still grow a shell up to 10 inches [30 cm] across. Their shell isn’t made of the lightest stuff, so how do they manage such a climb every day? Air chambers. See how the half shell in the picture has all those walls across the smaller sections? A Nautilus can pump each one full of a special gas mixture to go up and switch it out for a heavy liquid when it’s time to head back down.

Then the Nautilus squirts water out its front sending it shooting backwards at speeds over 2 knots [2.3 mph, 3.7 kph]. What’s more, the whole system is so efficient, a Nautilus only has to be sure to eat once a month to keep its energy levels up!

Sounds like Someone smart planned things out pretty well.

A Nautilus doesn’t have a typical eye to watch for prey and predators. They don’t have lenses like our eyes do, so some people say they are “primitive” and we’re pretty sure they only have limited vision. At the same time, here’s what Marine Science Today says about them, “Researchers are very interested in… the highly developed pinhole eye” they have. Those eyes may help us design better cameras if we learn how they really are designed.

Oh, yes, a Nautilus egg is bigger than any laid by other cephalopods (octopus, squid, cuttlefish family). They take about a year to hatch, are 3 cm (1.2 in) long, and already have 4 chambers finished when they first come out.

The fishes of the sea shall declare unto thee. Who knoweth not in all these that the hand of the LORD hath wrought this? Job 12:8,9

You can read more about them on these pages (all with “millions of years” included):

Aquarium of the Pacific: Chambered Nautilus 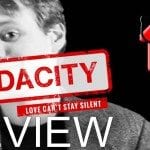 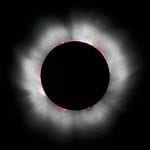