One thrill about being a geologist is that people ask about amazing places all over the world. I get to ‘travel’ the globe with a purpose.

Someone recently asked if I knew about La Piedra Del Peñol in Columbia.

No, I didn’t. Have you heard of it? A quick Google revealed it is an incredible monolith at the northern end of the Andes. Its top is 2,135 m above sea level, and it rises 220 m [722 feet] above the surrounding countryside. You can climb to the top by means of some 650 stairs.

The Rock of Guatapé, as it is also known, is composed of granite.

It was exposed when the surrounding landscape was eroded in the second ‘half’ of Noah’s flood, as the continents uplifted, the ocean basins sank, and the floodwaters that initially covered the whole continent flowed across the area into the ocean.

From images on Google maps, Google Earth, and the internet, it can be seen that there are hills surrounding the rock that are similar elevation to each other and to the rock. In other words, there was a higher land surface that has been eroded out.

The CMI article, “Inselbergs,” describes these sorts of features.

The rock is part of a huge volume of granite

called a pluton, that formed in the first half of the flood.

This CMI article explains these crustal convulsions and their relation to the formation of granites.

It was a devastating time for all people alive on the earth during the flood.

In fact, no one survived except Noah and his family; Noah who found favour in the eyes of the Lord. I think the account of Noah’s Ark is a dramatic and sobering illustration of the need for us to be somewhere safe when God’s judgement comes onto the earth.

I’m so glad that Jesus Christ is that safe place where we can be saved. 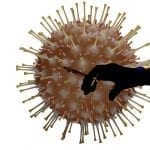