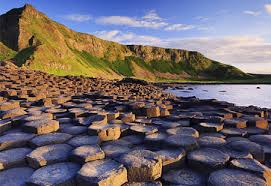 Each year, almost half a million people visit the Giant’s Causeway on the north-east coast of Northern Ireland to see the remarkable rocks.

On the plateau 100 m (330 ft) above the Atlantic Ocean, the rolling plains flaunt every shade of green. Steep basalt cliffs zigzag into the distance and the ocean foams along the rocky blocks below.

The Causeway is composed of tightly packed basalt columns crammed together with their tops broken off. They form a path of stepping-stones leading from the bottom of the cliff to disappear beneath the swells.

These volcanic rocks indicate a time when the world was very different. What was the cause? Generally, visitors are unaware that they are looking at some of the giant, catastrophic effects of Noah’s global Flood.

It’s not surprising that people do not see the connection. After all, the media regularly attacks the biblical history of Noah, claiming the story is a borrowed myth.1 Causeway brochures say the rocks are 60 million years old.2 How could events so long ago have any connection with a story written in the Bible? Geologic marvels in stone
Someone has estimated that there are 40,000 stone columns. Most have five or six sides but some have four, seven or eight. Columns are 40–50 cm (15–20 in) across and create a fascinating honeycomb pattern.

But people do not realize that geologists cannot measure the ages of rocks directly. It’s impossible, because scientists can only make measurements in the present. Without eyewitness reports, the best we can do is to calculate an age based on assumptions about the past. Geologists quote ages of millions of years because they make wrong assumptions. They don’t believe Noah’s Flood was real, so they ignore its catastrophic effects. (See ‘Radiometric dating’.)

Once we realize that the dates assigned to the Causeway are not measured but just someone’s opinion, we can look at the evidence in a different light. And the evidence of the Causeway points to a large-scale watery catastrophe, much bigger than anything we see today. It’s consistent with Noah’s Flood. One indication is the cataclysmic size of the lava eruptions.

The tourist feature called The Organ (pictured below, far left) illustrates the immense depth of just one lava flow. It is part of the first of seven lava flows comprising the Causeway Basalts. Only two are visible in the cliffs here. Astonishingly, Causeway flows are massive, commonly up to 30 m (100 ft) thick.3

On top of the columns, high above, sits a zone of twisted and irregular rocks. Geologists call the columns, the colonnade, and the upper zone, the entablature, with obvious reference to classical Greek architecture.

The first two lava flows of the Causeway Basalts are visible all around the Causeway in the upper half of the cliffs. They sit above a thin orange band. Under the band, the cliffs comprise a series of lava flows called The Lower Basalts.

The basaltic eruptions flowed over more than the area around the Causeway Coast. Basalt extends over 30 km south beyond Belfast, and 150 km north-east under the ocean to Scotland (see map, below).4

We see that Giant’s Causeway is dramatic evidence for catastrophic volcanic eruptions. Basaltic lava gushed out of fissures and holes in the earth at a tremendous rate. It surged so rapidly that it did not have time to solidify before covering the land in deep, glowing pools of molten rock. Evidence of water is another indication that Giant’s Causeway formed during Noah’s Flood. Water left telltale signs all over the lava flows:5

Even though the lavas flowed into abundant water, the eruption was so large and rapid that the lavas were able to flow for huge distances. The effects of lava-water interaction are particularly evident at the surfaces and edges of the lava flows.

Giant’s Causeway involved a large-scale watery catastrophe, much bigger than anything occurring today. As soon as we clear our minds of interpretations invented by people who do not believe in Noah’s Flood, we can see the evidence in a different light. We see that the geologic conditions are consistent with the world-shattering event described in the Bible—the event that dramatically affected the course of human history just 4,500 years ago. How do the columns form?

The pool of hot lava cools and partly solidifies into rock—starting at the top and bottom.

The three prongs on the cracks grow longer and join, forming polygons, generally with four to seven sides.

Cooling continues. More rock solidifies. The cracks spread upwards and downwards forming columns. The columns continue to cool. Their height shrinks and they break into pieces with ball and socket joints.

The idyllic setting on the Causeway Coast betrays the violence and hostility often experienced there. Exposed to the full force of the North Atlantic, many ships have met with disaster on the jagged rocks. The most famous is the Girona, the biggest ship of the Spanish Armada. In 1588, while heading for Scotland, it ran into worsening conditions, lost its rudder, and foundered at midnight, with the loss of some 1,300 lives.1 Giant’s Causeway is said to be 60 million years old, based on radiometric dating. But radiometric dating depends on assumptions and is not the absolute certainty we are led to believe it is. Even geologists will accept radiometric dates only if they agree with what they already think the age should be.

Radiometric dating gives many surprises. Basalts from Hualalai in Hawaii, observed to have erupted in 1800–01, gave potassium-argon (K-Ar) ages ranging from 160 million years to 3,300 million years.1 A lava dome on Mt St Helens in USA, observed to form since the 1980 eruption, gave K-Ar ages between 350,000 and 2,800,000 years.2 Lava erupted from Mt Ngauruhoe, New Zealand, between 1949 and 1975, gave K-Ar ages up to 3,500,000 years.3 Starting with appropriate assumptions, there is no reason to reject the biblical age of about 4,500 years for the Causeway rocks.

One striking feature of the Causeway cliffs is an orange bed, which forms a prominent band in the sheer basalt face. This bed creates a natural bench and the cliff path follows it around the bays. It is 10–12 metres (30–40 ft) thick and composed of soft, friable, red and brown material. Technically, it’s called the Interbasaltic Bed—i.e. the bed between the basalts.1,2 The Interbasaltic Bed contains a soft, brown coal called lignite. That’s simply vegetation altered chemically by heat in a wet, oxygen-free environment. Traditionally, geologists say this lignite formed over millions of years in a swampy environment, similar to the peat bogs in Ireland today, but the evidence contradicts this. Leaves and bark fragments are abundant, as well as pollens and other tree parts.3 In other words, the vegetation is too well preserved to have remained in a bog for thousands, let alone millions, of years.

In addition, the trees identified include cedar, pine, spruce, hazel and alder3—species that do not grow in peat bogs. The evidence points to water rapidly having washed the vegetation into place. Then heat from the basalt quickly transformed it into coal.

The bed does not represent a long period of time but rapid burial and energetic chemical alteration. During a pause in the volcanic eruptions, water flowed over the basalt and deposited a layer of sediment and vegetation. The next eruption trapped the water in the sediment, which, together with the heat, altered the basalt chemically. Once the basalt cooled, groundwater percolated through the soft material and continued the chemical alteration, producing a thick bed of soft material. Across the ocean, the tiny island of Staff, off the west coast of Scotland (near Mull and Iona), has similar rock outcrops.1,2 It is home to Fingal’s Cave (pictured). According to local folklore, the Irish giant Finn MacCool built the causeway so he could cross the sea to Scotland and do battle with his rival giant, Finn Gall.3 Tourist interpretive centres usually incorporate folk legends into their literature but are loath to present the true biblical perspective. 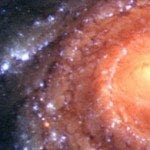 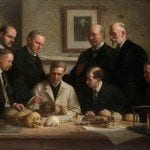