When many people think of evolution they think of a scientific idea that has little to do with their daily lives. They may, or may not, believe it is how mankind got here but, so what?!? What difference does it make?

Well, throughout history there have been men and women who’ve taken Darwin’s ideas to their logical conclusion in a way that’s impacted millions of lives. One such man was Adolf Hitler.

Hitler’s ideology was influenced by Charles Darwin. He believed we’re the result of millions of years of the struggle for survival. The weak die, the strong survive, and evolution continues to advance. He believed the Aryan race, the German people, were the most superior race and, being superior, they had the right to exterminate lower races such as Jews, Poles, or gypsies. And Hitler exercised this “right” by exterminating over ten million Jews, Poles, and gypsies in horrific ways.

Hitler’s terrible actions were the outcome of him taking evolutionary ideas to their logical conclusion. He was simply practicing survival of the fittest. After all, the strong eliminating the weak is thought to be how evolution progresses and has turned an ameba into a man, so why not continue (or speed up) the process and see what else evolution can do?

Now, most evolutionists will agree that Hitler was an evil man and that his actions were vile. But by what standard can they say this? If we are material beings who evolved than we’re just animals. We don’t think a lion is evil for killing a gazelle or a Venus flytrap is wicked for snapping up a fly. This is just what nature does. So why are humans suddenly different? In an evolutionary view, why were Hitler’s actions wrong but the actions of other animals aren’t wrong?

We know Hitler’s choices were evil because we have a conscience. It is immaterial and couldn’t have evolved. It was placed there by God, the Creator. And He hasn’t just given us a conscience. He’s told us right from wrong in His Word, the foundation for morality. 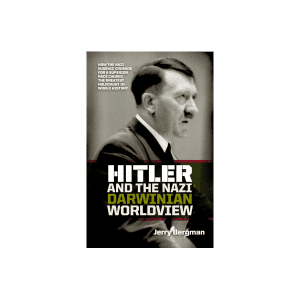 Hitler And The Nazi Darwinian Worldview takes a fresh look at Germany’s most influential Nazi leaders, examining their convictions, etc.