Usually, when you think of ‘The Beach,’ you think of happy thoughts, peaceful and tranquil times with the family. Picnicking and other sort of merriments.

But there’s another side to the beach! A fight of carnage and brutality.

And a lot of this is due to the tiger beetle. And today we are going to go and catch one!

Now, to catch a tiger beetle, you need a good net with a long pole. Now, I had a good net, but I didn’t have a long pole, so I just taped it to a stick I found, which works just as well. Now the reason you need a long pole on your net is because these beetles are fast, running or flying! And so, you need to be ready at all times to go after them. And we are going to look for them right now, here, on the sand dune areas, where they will be running around, looking for prey, okay?

Let’s see what we can find here. They are hard to see sometimes, because they will blend in with the sand.

Wait! There’s one, right there. Okay, here you go. We’ll move really slow, get your net far in front of you, get above the beetle. When you think you have it …
OK, come on, let me have it! I’ve got it.

Now when you catch it, you want to hurry to the front part of the neck so it does not escape or get out a hole or anything, and I will hold it inside the net, and get my other hand in there, and switch hands and pull it out.

Now these guys will bite you, but don’t worry, it doesn’t hurt. They’re just trying to defend themselves. They are called Tiger Beetles for several reasons. 1) Because they are the vicious, carnivorous predators of the open dunes.

Predator: A predator is an animal that eats other animals for food! Aargh!

Also, they have tiger-striped patterns on their back wing covers. That’s how you identify the different species of tiger beetles, by the color of their wing covers, by the habitat they’re in, and by their pattern on their back.

Now Tiger Beetles don’t eat anything solid. They will just suck the juices out of their prey.

And in fact, they won’t even drink straight water. They will suck the moisture out of damp sand or dirt.

Now if you want to keep tiger beetles at home, once you catch one, all you have to do is get a nice tank like this, fill it with some dirt or sand, depending where you caught it, and get some dog food. I get some dry dog food and I soak it in some water, and then once it expands, they will suck the nutrients out of there, so it’s quite easy to keep them. 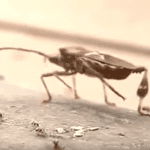 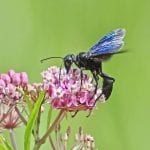