“I think we’ve found the best candidate for what was the beginnings of civilization,” said University of Hartford in Connecticut archaeologist Richard Freund on local NBC television news.1 A recently aired National Geographic television special that focused on Freund’s findings suggested that a certain coastal mud flat in southern Spain may hold the ruins of the lost city of Atlantis.2

What is really below the mud in Spain? And if it is Atlantis, how would it fit into human history?

Freund, along with an international team of archaeologists and geologists, used specialized imaging devices to see below the surface of the marsh, as well as below the surface of water off the Spanish coast. They were searching for stones laid out in concentric rings, which Plato described in his works Timaeus and Critias. And they found what they believe to be the makings of a city.

AOL News reported that what appear to be Atlantean memorial sites made of standing stones were important to Freund’s research, “because refugees from the lost city would have built smaller-scale versions in tribute.”3 Freund claimed to have discovered the “memorial cities” in central Spain, “which gives a layer of credibility, especially for archeology, that makes a lot more sense,” he told Reuters.4

Whether or not these ruins were part of a maritime civilization named Atlantis is difficult to determine conclusively, but it is certain that …Continue reading. 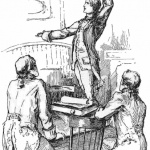