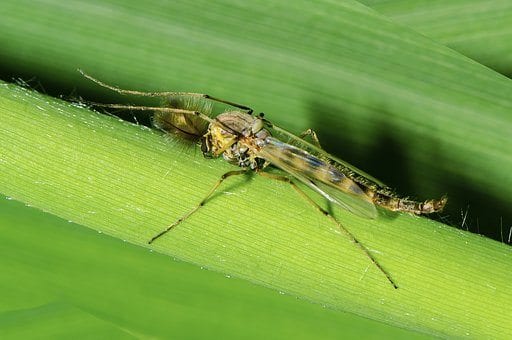 When I am outdoors during the early morning and evening hours on mild to hot days I am usually aware of a severe itching sensation on exposed skin. I know that I am being bitten by an insect known as a no-see-um. Once, I decided that I wanted to see a no-see-um so I got one of my collection containers (a small plastic bottle) and sat down while wearing short-pants. As soon as I felt a bite I looked loosely at the site and saw a tiny dark speck. Quickly putting the container over the speck I observed the speck fly upward and easily put the cap on the bottle. I did this 5-6 more times and soon had several no-see-um specimens. Now, I can say that I have seen (in real life) no-see-ums.

The common name “no-see-um” was coined (perhaps by Indians) because the insects are so minute (1-3 mm long) that it is difficult to see them (see ‘um).

No-see-ums are biting midges which are a type of fly and fall into a loose commonly used category of “gnats.” Depending on the region, no-see-ums are known as “punkies,” “five-O’s ( about the time of day they bite ), “pinyon gnats,” and “moose flies.” Worldwide there are over 4000 species (over 600 in North America).

God chose no-see-ums to remind us of the Curse and to keep us from getting too comfortable in this life.

Male and female no-see-ums primarily feed on nectar, but only the females bite (they actually slice the skin) because they need the protein in blood to mature their eggs. Besides humans, no-see-ums bite, pets, livestock, and wildlife (including birds, amphibians, and reptiles).

Keeping with the fact that nothing in God’s creation is “simple,” many species of no-see-ums bite at dawn and dusk, but some species bite during the day. Some only bite a specific animal, but many no-see-ums bite whatever creature they encounter. Some species do not need a blood meal to produce the first batch of eggs. The amount of oblong eggs laid varies between species and range from 25 to 450.

Eggs must remain in a moist area. The whitish eggs hatch within two to ten days (depending on species) after turning a dark color
The cream colored larvae eat dead plant and animal matter found among mud and rotting leaves. They look like worms and go through four molts before pupating.

Pupae colors range from light yellow to dark brown and this stage lasts 2-3 days. Males usually emerge first and are ready to mate.
The time from egg to adult depends on species and the conditions of the environment. Adults live for a few weeks.

Adult no-see-ums have two wings with a lot of hairs. The females may fly a little over a mile for mating while the males only travel about a half mile.

No-see-um bites are quite irritating, but I could find no record of them transmitting disease to humans except in tropical areas. Throughout the world (including the U.S.) they can spread a virus to horses, deer, cattle and sheep.

Currently, it is not practical to control no-see-ums with insecticides.
Small mesh screening, insecticide treated screening, applications of DEET on exposed skin, and avoiding locations where no-see-ums congregate are the best we can do until God provides His new creation. 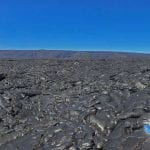 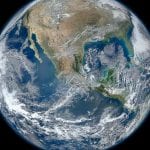