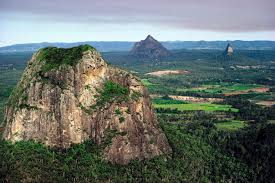 Just 60 km (40 miles) north of Brisbane, the area is known for pineapples, strawberries, papayas, passion fruit, avocados and other tropical fruit. Australia Zoo, owned and made famous by the Crocodile Hunter, the late Steve Irwin, is situated in the area.1

Captain Cook named these mountains on 17 May 1770, as he sailed up the east coast of Australia in his ship Endeavour. He wrote in his journal, “These hills lie but a little way inland, and not far from each other: they are remarkable for the singular form of their elevation, which very much resembles a glass house, and for this reason I called them the Glass Houses.”

There are at least a dozen plugs, the remains of volcanoes that pushed their way up through thick almost-horizontal layers of sandstone. It is hard to imagine what it would have been like as the volcanoes were erupting, spewing red-hot ash and lava from their vents and darkening the atmosphere with ash and fumes.

The lava was rich in silica and formed rhyolite and trachyte, volcanic rock that is typically yellow, pink, pale grey and other light colours. Silica-rich lavas are thick like porridge and leave characteristic steep-sided volcanic plugs. Geological history of the Glass House Mountains from a biblical Flood perspective.

Many of the plugs have well-developed columnar jointing. The northern face of Mt Beerwah is one prominent example, and the exposed columns are dubbed “The Pipe Organ”. Such long columns suggest the lava was extruded rapidly, generating a large volume that solidified and cracked as one extrusion.

At around the same time, volcanic eruptions of a different kind were active to the north and west. In this case the lava was basaltic in composition, rich in iron and magnesium, and it was hotter and more fluid than the lava that formed the plugs. This red-hot molten rock ran like water across the sandstone plateaus and solidified to form thick basalt caps, the Mapleton plateau being one example. Basalt lava forms rich red and brown soils ideal for farming and for the development of rainforest.

The countryside around the Glass House Mountains is made of sandstone, geologically called the Landsborough Sandstone. The thick strata are visible in steep road cuttings along the highway. The Landsborough Sandstone is part of an interconnected series of sedimentary basins called the Great Australian Basin, which extends from the east coast of Australia for thousands of kilometres south and west into New South Wales, west into South Australia and the Northern Territory and north to Cape York in northern Queensland.

The thickness and geographical extent of the strata point to deposition from massive surges of flowing water. Dinosaur footprints were found in some sandstone horizons in mines near Brisbane, and others in western Queensland near Winton.2 In other parts of the basin the well preserved remains of plesiosaurs and dinosaurs have been discovered.

Just before the Glass House volcanoes erupted, the landscape had been cut flat, forming an extensive plateau. After the eruptions, a hundred metres of sandstone or more was eroded from the countryside around the volcanic necks, leaving the remains of the plugs intact (similar to Devils Tower in Wyoming, USA3). Much of the basalt plateau was also eroded away but a remnant is preserved to the north and west, and is now a popular tourist destination.

Geological cross section of the area from the Glass House Mountains north beyond the Mapleton Plateau—about 25 km (15 miles).

The Glass House Mountains provide a graphic insight into the dramatic events connected with the biblical Flood, which is how they were formed. To understand what happened, you need to disregard the dates that conventional geologists give for these events. The dates they quote (of 25 million years for the volcanic eruptions) are based on assumptions that ignore the catastrophic processes associated with the Flood.

From a biblical Flood perspective, the sandstone was deposited as the floodwaters were rising on the earth, and depositing extensive sedimentary sheets across thousands of kilometres of the landscape. What caused the eruptions? They occurred at a time when the entire eastern edge of the Australian continent was placed under strain. In fact, there is an entire series of volcanoes that stretch from north of Cairns to Victoria down the east coast. It is likely that the north-south stress on the continent was associated with the development of the ocean basin to the east of the continent, which was lowering and beginning to receive floodwaters off the continent.

The plugs were injected into the sediments after the floodwaters had been receding in sheets for some time (cutting the sandstone plateau) but before the earth was completely dry. That means they would have intruded somewhere toward the end of the Abative phase of the Flood, when the receding waters were still flowing in wide sheets. After they erupted, ongoing erosion during the Dispersive phase, when the water was flowing in wide channels, removed surrounding material, and carried it out of the area, leaving wide valleys with the plugs standing tall and isolated. 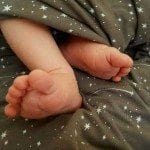 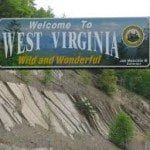