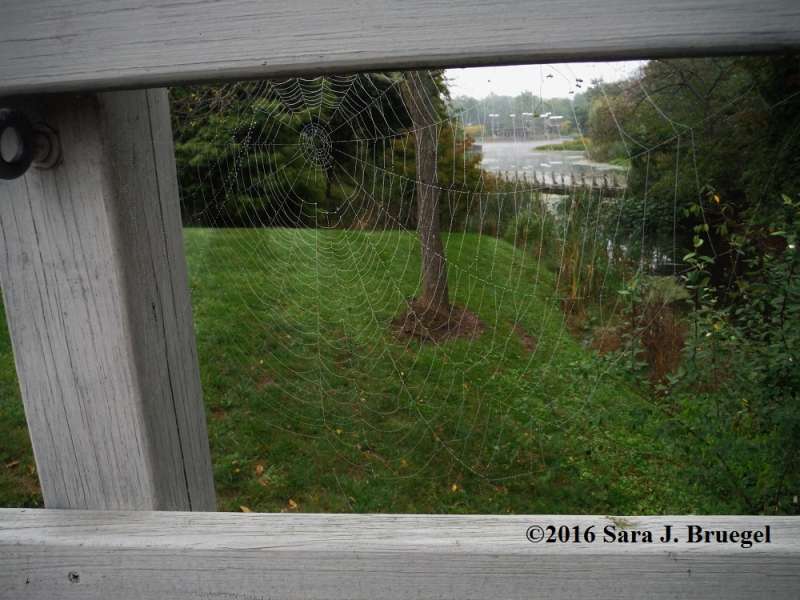 A gentle fog lingered in the autumn morning air.  As I walked across the damp grass, I was excited to see the rain gauge after the stormy day before.   I stopped suddenly to gaze at the glistening barrier between me and the rain gauge.  Dew drops clung to the thin, lacy spirals of the large spider web strung across my path, right in front of my face.  I watched a little bug struggling near the center of the nearly invisible sticky trap.  Suddenly the host spider ran out to catch her prey, do her work quickly, and run back to a safe corner. The spider either saw me or decided it was getting much too light for her taste, because soon after her meal was taken care of, she began to quickly and carefully disassemble her web.  Spiders definitely aren’t my favorite type of creature to keep in the house, but there is something very alluring and beautiful about their webs.

A spider uses very special glands and incredibly tiny, intricate structures to create its silk and spin that silk into just the right kind of thread for the job.  There are several different types of silk thread a spider can make and use for the right purpose.  There are special types of silk for making an egg sac or wrapping up their freshly caught meal.  When a spider weaves its web, it first creates a y-shape to anchor the web, and builds other support strands that look a lot like the spokes of a bicycle wheel.  The silk for these supporting spokes is not sticky.  After those supporting strands are made, the spider will make a quick “auxiliary spiral” made of non-sticky thread to keep it together and act as a pattern for the sticky spiral.  This sticky spiral silk is made with a special glue that will help catch the bugs that the spider will eat.  The spider waits on a sensitive area of the web and pounces out, tiptoeing carefully on the non-sticky threads, and wraps its meal in a different type of silk.

A spider’s silk, though incredibly thin and flexible, is stronger than any man-made fiber.  Not only are the silks perfectly designed to be sticky, strong, flexible, and easily taken down, but the web is also incredibly engineered.  When under pressure, the whole web will gently bend.  But if the pressure becomes too much, the part of the web under the most pressure will actually stiffen and crystallize, actually causing just that section to break. The rest of the web stays intact and can easily be repaired.  In fact, a web with a few strands broken is actually specially designed to be even stronger than the original web! Not only were spider webs specially made to be able to break and be easily fixed, but the structure of an ordinary orb web looks very similar to a flower when they are both put under an ultraviolet light.  This tricks some bugs into thinking they’re headed to a nice flower when they are actually about to be trapped in a spider web.

Thinking about all of these amazing features of just a spider’s web (not even the spider itself) that scientists still cannot make on their own should turn our eyes towards the Master Web Designer, God, Who created the way spiders form webs.  Some people try to say that the spider and other creatures are just a product of random-chance accidents over millions of years, but the ability to make a web with all the right types of silk spun the right way and with the right chemicals, then woven in an ideal structure would require way too many different things to be “just right” all at once.  Fossil spider webs that look just like the orb webs we see today have been found preserved in Amber in the same layers as dinosaur bones (buried in the Jurassic rock group).  This was a big surprise to people who held to the view that spiders evolved slowly over long periods of time.  The spider web shows intricate patterns of being perfectly designed from the beginning, just a few thousand years ago.  Next time you see a spider web, before you brush it away, take a minute to marvel at its design and praise our Creator. 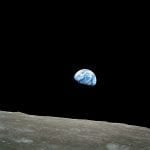