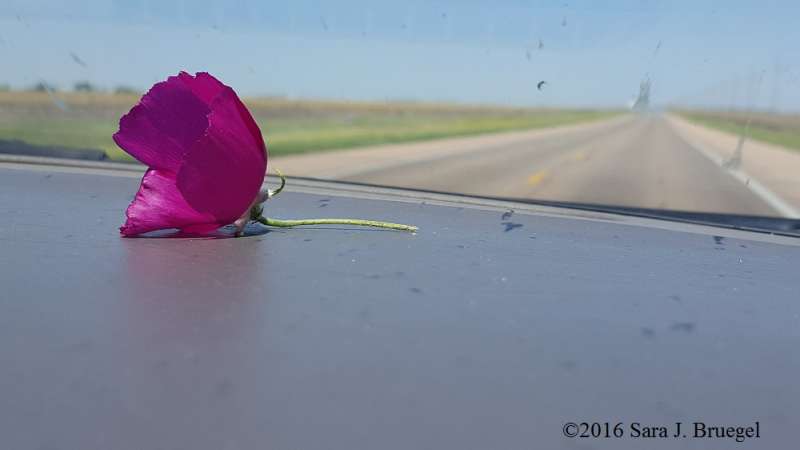 Captivated by the vibrant magenta color dotting the patchy grass, I gently plucked one of the roadside wildflowers by the Kansas state sign.  I had been admiring those colorful, cup-shaped flowers out the car window for at least the past twenty miles.    Back inside the car, I admired the way its five delicate petals folded around the pale center of my wildflower.  It sat on my dash for the next several miles . . .  until the intense afternoon sunshine coming through the windshield wilted the poor thing.  Sad to let it go so soon after finding my little treasure, I rolled down a window and let the air sweep it out of my fingers.

During the same trip, going to a fossil dig in western Kansas (more about the dig here),  I noticed many other patches of the same flowers, only a slightly different color.  These purple/magenta colored wildflowers are commonly called “purple poppy mallow” or “wine cups”, and their scientific name is Callirhoe involucrata.  The root system of these plants is designed with a single, deep taproot, allowing these flowers to grow well on rocky terrain and drought conditions.  In some plants that live for several years, these roots can grow big like a carrot and historically have been eaten by Native American people.

Poppy mallow can be seen blooming from late spring through mid summer.  Like tropical hibiscus flowers, another type of “mallow” plant, poppy mallows thrive in warm conditions.  The flowers open in the mornings, two to three hours after sunrise, and close for the night around sunset.  They continue to open for six to eight days after first blooming.  A rarer Texas species of Callihoe that looks very similar to the Kansas flowers is called scabriuscula.  When this type of flower is ready to form the seeds that will start the next generations, the petals are permanently closed within ninety minutes of being pollinated.

The flower essentially has to give up its own dandy lifestyle by permanently closing so that seeds can form.  Speaking of those seeds, to plant your own poppy mallow, it’s recommended that you rub the seed between pieces of sandpaper to help grind down the hard outer coating of the seed.  Planting in the fall, you can leave that seed in the ground all winter.  There the seed waits, buried in the dark, cool, rough soil. When the spring time comes, that seed dies.  Or at least, so that poor, sanded seed seems to die, as it gives up everything it has ever known living life as a seed.  There’s no going back to that relatively safe, comfortable seed-life. It takes full commitment to becoming the plant it has always been destined by the Creator to become.   The plan for that seeds life, including the death it takes to become a plant, is written in its DNA – the set of instructions originally designed by God, built-in with a little room for variety.  By “dying” according to that plan, the seed can truly live the life it was meant to live . . . as a purple poppy mallow flower!

Seeing that our Lord dots the grass along highways with these stunning flowers and perfectly orchestrates their life cycles, how much more does He orchestrate the life cycles of His most precious creation – you, me, and all people?  Many of those poppy mallows that I saw in Kansas were gone the next week.  The life of the seed, as well as the flower that gives up its life for the seed, may look a little rough and painful.  Like the seed, choosing to be fully committed to new life in Christ will also require death – death to my own plans, will, desires, flesh, etc (see Romans 6 &7).    Choosing to let those things “die” doesn’t mean that they must not be “good”, merely that they are not necessarily the God’s best for my life plan. Seeds are good, but they were meant to become flowers that point people to God.  Dying to self merely means choosing to be fully committed to God’s plan, for you, too, were meant to bring glory to Him. 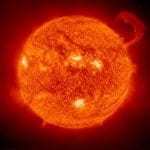 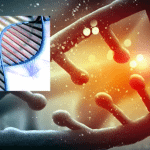