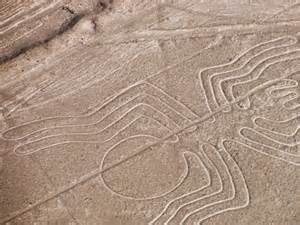 One of the very cool things I’ve learned in the past year or so is just how small of things that the ancients could see. The first time I heard about this ability was when I learned about the Nazca Lines of Peru.
These are actually huge, shallow ditches carved out of the desert plain. The pictures we can still see are of all sorts of things including a monkey, a condor, a hummingbird, and this spider.

In this image, you will see that one leg has a long bend that extends far beyond the carefully carved legs on the rest of the drawing. Of course, there are skeptics, but the only spider we know of that has one long leg like that is a rare, tiny spider that still lives in the Amazon (with some African cousins, too). This spider only grows to a maximum of 10mm or .4″ long. While the ground carving the Nazca made is 45m long (almost 150 ft)! But the spider is still completely correct to the spinnerets and reproductive parts that we have to use a microscope to see. Even if they were using some other type of spider to study, how did they get to be so accurate on such a large scale?

Turns out there is a lot of evidence around that the Ancients had optical lenses. It’s been hard for me to pick pages to have you visit that aren’t trying to convince you that we got to be so smart so fast because of aliens, but here’s one from Answers in Genesis that I’ll talk about a bit more in a minute.

This page is from an astronomy group in Australia talking about the optic abilities of the ancient Egyptians. They don’t get into the modern metaphysical aspects of these things, just point out such abilities as the lenses on the funeral masks of the pharaohs and the ability the lighthouse of Alexandria had (during the time of the Greeks) to make faraway ships look bigger.

Here’s another page that quotes from the same book as the Answers in Genesis article. They have some really great pictures, especially of the Babylonian guy studying the heavens with one of these lenses. When I started trying to write this post this morning, I tried the keyword “telescope” to see if we have any evidence of the ancients seeing too small things before Galileo. I didn’t turn anything up, but this picture would explain why. They didn’t use a tube like we do, just a really good lens mounted like a giant magnifying glass!

I did find there is a culture (that my kids and I just read about in Window on the World) in Mali, Africa that remembers some things that we only relearned in the last hundred years. The Dogon people already knew that there is a binary star with Sirius that is far too small to see without magnification. They even knew that it is small and heavy (what we now call a white dwarf star). This page isn’t too bad on the extra stuff, and is a very fascinating read about ancient knowledge that the main stream Evolutionist culture doesn’t like to talk about.

Here’s another page on Greek Era lenses. This page shows an ancient telescope. Apparently, Nero used glasses made from Emeralds to correct his nearsightedness. It seems that there are hundreds of samples of these lenses from across the ancient world, but when they are displayed in museums they aren’t labeled that way. It’s easier and safer for the scientist to avoid the controversy of just how smart Noah’s early descendants actually were. The Answers in Genesis article mentions how the ancient Greek writings frequently have optical words in them that later translators assumed must be typos because they couldn’t have know that stuff back then.


Now, for most purposes Convex lenses are the most practical. They are the ones that help us see tiny things and faraway things. They are also the only ancient ones we’ve found so far. Even if the ancients did make concave lenses, they would be much less likely to survive all this time, as the AiG article points out. If you look at the Biconcave drawing on the left, you will see that the thin, easily broken part of the lens is through the middle. This means that the lenses that could survive long careless burial would be the convex type.

Check out this page on the natural crystals that were available.

Other posts in this series: * Creationist’s Prediction #3 * The Piri Reis Map