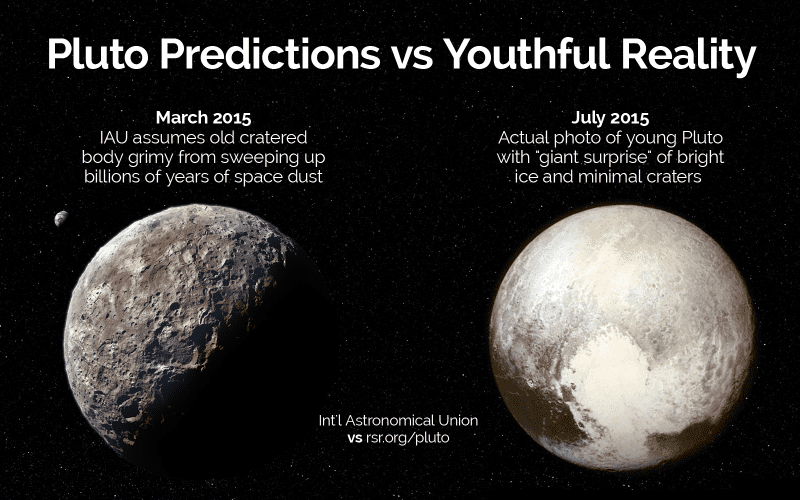 Earlier in 2015, the Int'l Astronomical Union assumed Pluto would look like an old, cratered body grimy from sweeping up billions of years of space dust. Later, actual photos of the young Pluto were a "giant surprise" to materialists with its bright ice and minimal craters.

See in the image above what materialists expected Pluto to look like, from this typical image published by the International Astronomical Union in March 2015. That visual prediction of the secular astronomers depicted a heavily cratered body grimy from sweeping up billions of years of space dust. Once again though, as can be seen by the actual photo of Pluto from NASA’s New Horizons mission, also above, the predictions of old-earth astronomy failed. Likewise, from its physics to its major predictions, the entire theory of solar system formation, the nebular hypothesis, has failed.

Nasa Planet Guy Admits Failed Theory: Real Science Radio hosts Bob Enyart and Fred Williams present on air their List of Problems with Solar System Formation. To get the big picture, they quote NASA’s exoplanet database manager Caltech astronomer Mike Brown wh0 said: “Before we ever discovered any [planets outside the solar system] we thought we understood the formation of planetary systems pretty deeply… It was a really beautiful theory. And, clearly, thoroughly wrong.” Exoplanets, with their masses, sizes, composition and orbital characteristics differ from what had been predicted for decades by the standard model of solar system formation, including with their retrograde orbits, highly inclined orbits and hot jupiters, effectively falsifying that model.

The actual photos of Pluto, from July 2015, will help make it obvious to thousands more people that the nebular hypothesis theory of origins is not helpful in understanding our solar system (or any other solar system for that matter). On their radio show, Bob and Fred air an audio clip from a leading planetary scientist on the Passport to Pluto Science Channel update on NASA’s mission acknowledging that even close to home, the predictions of mainstream (secular) astronomy mostly fail, and that’s for planets nearest to home, in our very own solar system system.

Amazing Discoveries Refuting a Theory: Taken together, the impressive scientific discoveries that completely falsify the nebular hypothesis of solar system formation include these:
– exoplanets contradict the predictions of the nebular hypothesis theory
– our Sun is missing nearly 100% of its predicted spin
– our Sun’s rotation is seven degrees off the ecliptic
– planets would not form because as admitted in Nature in 2013, “according to standard theory, dust grains orbiting newborn stars should spiral into those stars rather than accrete to form planets”
– even when dust grains and small rocks collide gently they break apart instead of accreting to form planetesimals
– even if the laws of physics enabled planet formation 4.5 billion year is far too little time to build large planets
– the missing predicted uniform distribution pattern of solar system isotopes
– the missing expected uniform distribution of Earth’s radioactivity
– the contrary-to-expectations fine tuning of the solar system
– the many contrary-to-expectations transient events in the solar system
– that proponents try to prop up the theory by claiming ubiquitous planetary catastrophism
– star formation has seemingly intractable physics problems (consider the Philae landing)
– contrary to an Oort or Kuiper origin, comets contain earth-like minerals and rounded boulders
– short-period comets still exist even though they have lifespans of only thousands of years
– the 1,346 trans-Neptunian objects with known orbits reach perihelion at the ecliptic
– the MNRAS published analysis showing simulations can never demonstrate both planet and asteroid formation
– Mercury has greater density than can be accounted for by evolutionary accretion
– the rocky planets Mercury, Venus, Earth, and Mars would rotate far more slowly if accreted from a condensing nebula
– the origin of the gas giants Jupiter and Saturn has no “satysfying explanation” per the journal Science in 2002
– that Uranus rotates perpendicularly and Venus rotates backwards.

Planet Formation Not Demonstrable by the Laws of Physics: Reports in 1972, 2000, and 2015, concur that the claim that the idea of planets accreting from collisions of dust and small rocks has not been demonstrated by application of the law of physics. “It turns out to be surprisingly difficult for planetesimals to accrete mass during even the most gentle collisions”, Scientific American, May 2000. “But little is known about how microscopic dust particles can grow 14 orders of magnitude bigger to become a giant planet within the relatively short lifetime of the disk”, the journal Nature, November 2015. And regarding the gas giants, “Talk about a major embarrassment for planetary scientists. There, blazing away in the late evening sky, are Jupiter and Saturn—the gas giants that account for 93% of the solar system’s planetary mass—and no one has a satisfying explanation of how they were made”, Science, November 2002. Notice that mainstream science outlets typically do not acknowledge severe problems with their most popular theories unless they have something, anything, to offer as a possible patch or replacement. If they were more objective, they would readily acknowledge such problems. Also, these science publishers, acting as a public relations service for the atheistic worldview, have adopted a ploy advocated by Eugenie Scott by which they present every new problematic discovery as “shedding new light onto how” such and such a thing originated, rather than forthrightly acknowledging that the latest discovery tends to falsify their theory.

So the Corporation for Public Broadcasting, the BBC, Nova, Bill Nye, Lawrence Krauss, etc., wrongly built public confidence in the secular origins nebular hypothesis story. The longstanding claims of solar system formation were invented ad hoc to account for the particulars of our own solar system. Now that thousands of exoplanets are being discovered, the story telling will simply become, as with epicycles and levels of Darwinian selection, shall we say, more complex.

Dec. 2, 2015 Issue of Nature – How the Solar System Didn’t Form: From the Nature article, “Standard planet-formation models have been unable to reconstruct the distributions of the Solar System’s small, rocky planets and asteroids in the same simulation. A new analysis suggests that it cannot be done.” Creation writer David Coppedge quotes the following from the article, and RSR has added the bracketed comments:

[MYTH:] About 4.5 billion years ago, the Solar System formed in a disk of gas and dust particles that surrounded the newly born Sun. The ‘giant’ planets (Jupiter, Saturn, Uranus and Neptune) formed first, within the few million years of the disk’s lifetime. Closer to the Sun, the small, rocky ‘terrestrial’ planets (Mercury, Venus, Earth and Mars) took tens of million years to form, by collisions of numerous smaller objects generated in the disk. Myriad small bodies formed the asteroid belt between the orbits of Mars and Jupiter.

[REALITY:] Despite decades of attempts, no computational realization of standard formation theories has reproduced the mass and orbital distribution of both the terrestrial planets and the asteroids. Writing in the Monthly Notices of the Royal Astronomical Society, Izidoro et al. show that this is not possible.

* Socks Blown Off: And from RSR’s List of Shocked Evolutionists, not only do close-up photos show the youthful appearance of Pluto, but they show the same for its largest moon. “We originally thought Charon would be an ancient terrain covered in craters,” said New Horizons team member Cathy Olkin. “So when we saw the pictures this morning, it just blew our socks off.”

Note: This is our first Real Science Radio article for The Creation Club and we are honored to be a part of David Rives amazing outreaches! 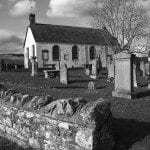 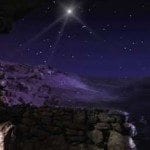