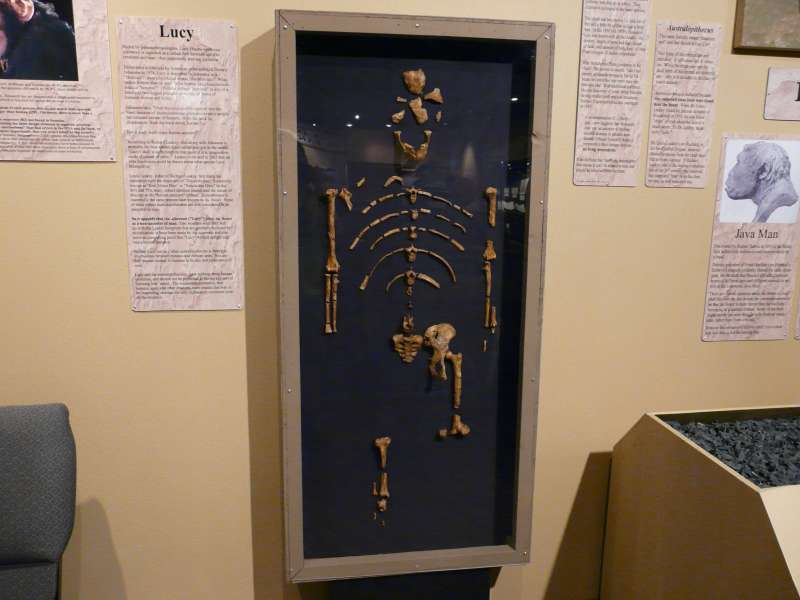 The first so-called ‘hominid’ claimed by 6th and 10th grade textbooks to be on the road to modern humans is Australopithecus afarensis,1,2 the most famous specimen being the famous “Lucy,” represented by an approximately 40% complete skeleton.3 (From here on in this article, I will use the name “Lucy” to refer to the whole species.)

Australopithecus means ‘southern ape’ while afarensis refers to the Afar Triangle area of Ethiopia where the original ‘Lucy’ was discovered by Donald Johanson in 1974. As her name suggests, Lucy’s 3.5-to-4-foot tall skeleton3 is, overall, very ape-like. She had a heavily-sloped face1 and a v-shaped lower jaw,4 traits characteristic of apes but not humans. She and her kin had long, curved fingers5 to go with shoulders well-suited for a tree-climbing ape.6 “Like a chimpanzee, it had a small brain, long arms, short legs, and a cone-shaped thorax with a large belly.”7

So, if Lucy was so ape-like, why do public school textbooks say that she is our ancestor? The Miller & Levine Biology textbook admits that although Lucy’s kind (the australopithecines), “probably spent at least some time in trees,” they were “bipedal apes,” meaning that they could walk upright on two feet like us.8 Evolutionists believe that this was “the most important aspect of hominid development,” because it, “freed the forelimbs for manipulation and carrying, making and using tools, and for hunting. Challenged by new opportunities, man’s brain began to develop.”9

Apes today occasionally walk upright, however their movements are limited and awkward because they lack the necessary hip, leg, and foot structure to walk like us. However, evolutionists believe that Lucy was an important ‘step toward’ in the evolution of man, because she supposedly possessed all of these necessary features for upright walking.10 Further, bipedal footprints from Lucy’s same time are used as confirmation that she did, in fact, walk upright.8

However, when we examine the evidence more closely, this picture of Lucy starts to “fall over.” The first piece of evidence used to claim Lucy as a biped was the angle of her legs. This is important because human femurs are angled toward each other, giving humans a ‘knock-kneed’ appearance and the ability to walk upright. When Donald Johanson found the set of knee joints in 1973, he believed that they were “clearly from a bipedal creature,”9 with a shape indicating that she was ‘knock-kneed’ like humans. However, this exact same knee-angle is also seen in spider-monkeys and orangutans.7 So, this evidence alone does not prove that she walked like us.

Further, her hip was flared-out like a chimpanzee, unlike round-hipped humans, ruling out the possibility of upright walking. In order to ‘fix’ this ‘problem,’ Dr. Owen Lovejoy, in the first episode of NOVA’s “In Search of Human Origins” series, revealed how he ‘restored’ Lucy’s pelvis to its ‘original’ shape using a power saw on a plaster replica. However, this reconstruction presumes that Lucy walked like us, and therefore, her hips must have been shaped differently in life but were somehow ‘altered’ after death, something which cannot be proven by direct observation.12

Another piece of evidence used to argue that Lucy walked like us is a single foot bone belonging to a separate collection of bones from 13-17 different individuals known as the “First Family.” This bone, a 4th metatarsal (mid-foot bone), is nearly identical to that of modern man, indicating an arched foot, a necessary component for upright walking.13

Interestingly, when these bones were first discovered, Johanson noted how human-like many of them were, so much so that he believed they represented an ancient member of our own genus, Homo.14 However, they were later assigned to Lucy’s species, A. afarensis. Why? Because if Lucy was really our ancestor, then humans could not have existed alongside Lucy! Therefore, these bones couldn’t have been from humans. This logic is then applied to the foot bone, leading to the conclusion that Lucy’s foot was arched and human-like.13 This is circular reasoning at its best (or worst)!

This same type of circular reasoning can be seen in the case of the Laetoli Footprints, a set of bipedal fossil footprints from Lucy’s time. Although the shape of the feet that made these tracks was “exactly the same as ours,”15 it is believed to have been made by Lucy’s species because modern humans were not supposed to have evolved yet. As stated by Dr. Louise Robbins of the University of North Carolina, Greensboro, “They looked so human, so modern, to be found in tuffs [volcanic ash layers] so old.”16

This mystery disappears, however, when take off the evolutionary “glasses” used to interpret the evidence and apply a biblical worldview. According to Scripture, humans and apes were created separately on the same day. That means that humans and apes have coexisted as humans and apes from the start!

This makes better sense of all the evidence, including Lucy’s locking wrists for knuckle-walking (like apes do today)17 and an ape-like ear which indicates she couldn’t have maintained an upright posture, and therefore, couldn’t possibly have walked like us.18

So, instead of showing evolution, the evidence clearly confirms that humans are unique among God’s creatures, “For not all flesh is the same, but there is one kind for humans, another for animals, another for birds, and another for fish.” (1 Corinthians 15:39). 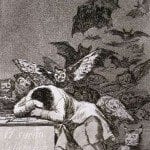 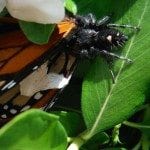