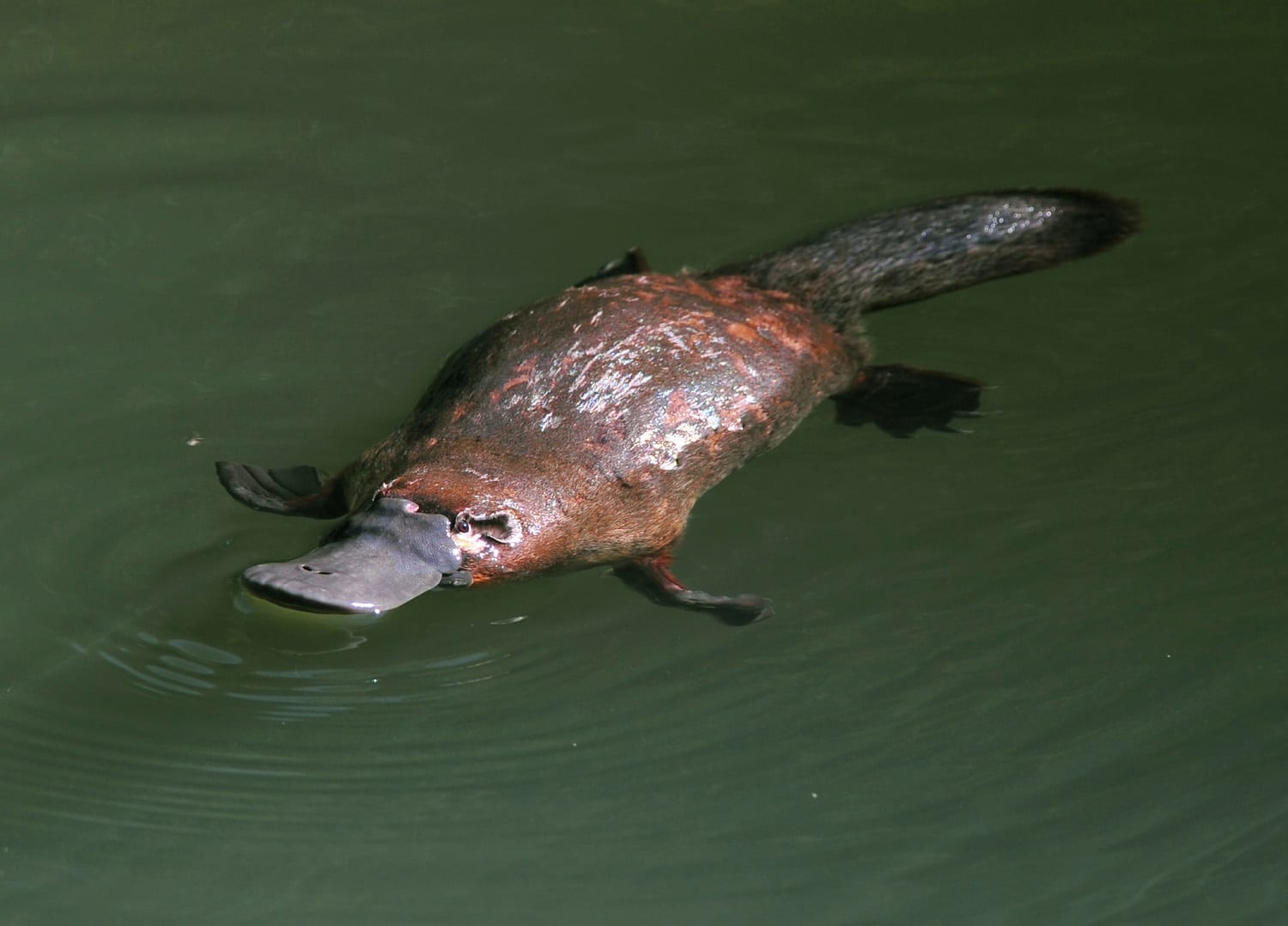 [Originally published as The Platypus: A Magnificent Design]

In the freshwater streams of eastern Australia lives a most unusual creature. Fur like velvet, a beaver-like tail, and a soft duck-like bill, this odd-looking creature can make a curious sight for those who see it for the first time.

When first seen in 1797 by early white settlers near the Hawkesbury River, outside Sydney, it triggered a search and controversy that lasted almost a century. Nicknamed the ‘watermole’, it was said to be a combination reptile, bird, fish and furred animal. The perplexed local governor sent specimens back to mother England for study.

But the English found it equally unbelievable. One zoologist suggested it was ‘freak imposture’ sold to gullible seamen by Chinese taxidermists. Another, suspecting fraud, tried to pry the ‘duck’s bill’ off the pelt; the marks of his scissors can still be seen today on the original, now preserved in the British Museum of Natural History in London.

But years of doubt were conquered by reality. In 1802 an English scientist confirmed the creature was neither freak nor fraud but fact. Labeled ‘platypus’ because of its flat bill, and given the scientific name Ornithorhynchus, it had finally splashed its way into natural history. But what about that unmentionable of nineteenth century England—the sex life of a platypus? Surely the rumors couldn’t be true that here was a furry animal that actually laid eggs.

Mammals give live birth to their young and feed them milk from their breasts. But the mother platypus has no teats—it couldn’t be mammal. Yet it was covered in fur. People were intrigued. Scientists pondered over it. The great egg debate went on for 82 years. Finally, a Scottish zoologist visiting Australia plucked up courage to look under the platypus’s kilt and confirmed that the female really does lay eggs. 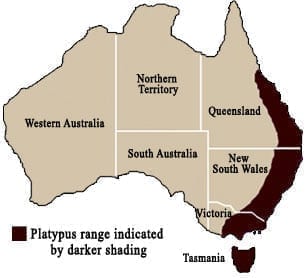 What about the history of the platypus? Where did it come from? Why is it only found in Australia? All fossils found of it are essentially the same as today’s living creatures. It certainly shows no signs of evolution. Its only significant change seems to have been to lose some teeth and shrink in size.

Indeed, evolutionary scientists are baffled about the ancestry of the platypus. They openly admit that nothing is known about its history that can explain its geographical distribution. But then, all they had to go on until 1984 were two teeth, a jaw fragment, a hip-bone from the deserts of north-eastern South Australia, and a skull from north-western Queensland, over 1,200 kilometers away. Evolutionists said these fossil platypus fragments weren’t useful, since they were merely 15 million years old.

In 1984, however, a platypus jaw with three large teeth was found among a collection of opalised bones at Lightning Ridge in northern New South Wales and pronounced to be at least 110 million years old. Naturally, evolutionist scientists were excited. It seemed they had now established the platypus’s great antiquity. Before that discovery, they believed no land mammal had been found in Australia in sediments dated older than 23 million years.

But this platypus jaw did not help the evolutionists discover how the platypus had evolved. The new jaw was bigger than that of the present-day platypus and had larger teeth. If anything, it showed that today’s platypus has degenerated since the time of its ancestor. But evolutionists can never say anything so straight-forward. Their pronouncements based on the skull included claims such as the platypus must have undergone such a relatively rapid period of specialization during the past 15 million years that it has climbed too far out on a long, thin evolutionary limb and so well may be headed for ‘evolutionary oblivion’. In other words, there is no evidence that platypuses have evolved, but there is abundant evidence they have degenerated – which fits the Genesis record precisely.

So what has been the history of the platypus? Where did it come from? We are told that God created water creatures on Day Five and the land animals on Day Six of Creation week, so the first platypuses, even though not mentioned by name, were obviously included. And we know they survived Noah’s Flood, because God sent two of every kind of land animal to Noah’s Ark and water creatures didn’t need to go. It is most likely however, that Noah had a pair of platypuses on board his Ark, since even though they are water dwellers, it is unlikely the platypuses would have survived the raging flood waters.

How did the platypuses get to Australia after Noah’s Flood? If they were on the Ark they obviously swam and walked here from Mt. Ararat. This would have taken years, even centuries. The platypuses could have used any land bridges that existed between Asia and Australia as a result of the drastic lowering of sea level during the ice age subsequent to the Flood. But once the ice age ended and the land bridges disappeared, the platypuses were left to thrive in isolation on their island continent home.

Some of the most marvelous engineering in God’s creation can be seen in this shy ball of fur. When under water the platypus catches its food with its ears and eyes firmly shut. They are enclosed in a facial furrow. So how does it find food on the murky river beds? Platypuses don’t stay under water long to collect food: only a minute or two before surfacing. Then another minute or two at the surface to sort and chew its food, which it holds in large cheek pouches, before diving again. This feeding process may total 12 hours a day. Researchers didn’t even know this was such a puzzle until recently. It was assumed that the dumb platypus hadn’t ‘evolved’ far enough to be a smart food collector and he simply blundered along stream beds, swamps or ponds, grabbing any potluck delicacies he came across.

Scientists have only recently learned that this amazing animal doesn’t blunder in the mud at all. Its bill is a highly tuned receptor that picks up the weak electric fields of the shrimps and worms it eats. This sense is so sharp it can even detect prey under mud, rocks and minor debris. Alongside a created ability like this, man’s invention of the metal detector pales into insignificance.

Out of the water, the platypus’s hearing is acute. And its beady eyes are well placed for scanning the river banks. When disturbed it growls like a puppy, or rumbles like a broody hen pulled from her nest. Its short legs have strong claws and webbed feet, but unlike a duck it can roll this webbing up into its palms to free its claws for digging. And digging is important for the platypus, for it digs a long winding tunnel up to 20 meters long into the stream bank in which the mother lays her eggs. As she may use this burrow in future years, it can become steadily longer and more elaborate.

There are two kinds of platypus burrows. One is used as a living room by both sexes except in the breeding season where it is used as the bachelor apartment. This burrow is usually semicircular with entrances at each end concealed by overhanging ledges, and is often beneath the roots of a large tree.

The mother digs the second type of burrow for breeding, and adds to it a ‘nursery’, or nesting chamber. The passage conforms to her shape, and is sloped up as a protection against flood. The entrance is always above water. Any entrances found below the waterline would have been dug before the water rose, and are never used for entry. The animal usually spends some time on the bank preening and squeezing water from its fur before entering its home as dry as possible.

She may fit out her nest with gum leaves, grass, thin willow switches, or reeds crushed by the mother’s bony jaws. To create ideal brooding conditions, the mother plugs the burrow behind her at intervals with walls of earth. These plugs help resist flooding and offer some safety from potential enemies.

The mother usually lays her eggs in pairs. More rarely one or three sticky, soft-skinned eggs are laid. When she lays three eggs, they are always attached in a triangle. She then stays in the nest until the children arrive. She holds the eggs to the middle of her coiled body during incubation, causing the eggs often to stick together. In 10 days or so her children hatch out.

The platypus is not an ordinary mammal, after a week or so the babies suckle milk from their mother, not from nipples but from tufts of hair. The mother’s milk seeps into the fur from enlarged milk glands to feed her blind and helpless new-born babies.

A new generation of remarkable little platypuses are now ready to move into the world for their 10 to 15-year life span. And a new generation of humans can once more marvel at this unusual and wonderful creation of God.

The young platypuses of both sexes have ‘spurs’ on the inside of their hind legs. In the female these later disappear, but in the male they develop into defensive poison spurs which seem to be used only in the mating season. This feature makes the platypus the world’s only venomous furred creature. If the male strikes, it may cause effects like snakebite, but no record of human death is known.

The platypus has only few natural enemies including two Australian reptiles (large goanna and carpet snake), and the native water-rat, which can destroy young platypuses in their burrows. The introduced fox is also a problem, for it kills the young when they first venture out from the nest. 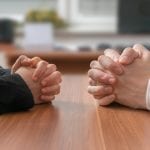 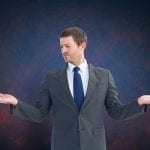