One of my greatest hopes for these video commentaries is that I can bring people closer to God through the Bible and the study of science.

But as a believer, I also want to bring people closer to the Messiah and Savior, Jesus Christ – Yeshua of Nazareth.

As sinners, we all have to be cleansed by blood sacrifice. Before the arrival of the Messiah, that was accomplished by the repetitive killing of animals. At this very time of year, some 3500 years ago, the Passover lamb was killed, and the blood was placed on the door posts. By that blood, God would cause the houses of Israel to be passed over, and what happened that night caused the Israelites to be free from bondage.

Well, about 1500 years later, AGAIN, on Passover at this very time of year, God sent His Son to Earth as a man, to perform a completely unselfish act of love. Jesus became the Lamb that was slain, our Passover, Who was crucified and resurrected, so that we could be cleansed from sin.

How were we forgiven? By the Blood of the Lamb.

I just finished in the studio, recording a new single. A song called By the Blood. It brings an important message at a very appropriate time.

It is now available on iTunes, and is beginning to receive radio air-time. You can hear a sample on my website at davidrives.com. I hope you are blessed by it.

As always, I’m David Rives, and truly, the Heavens Declare the Glory of God. 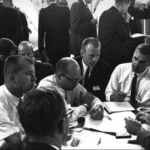 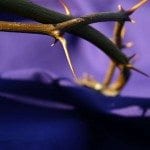