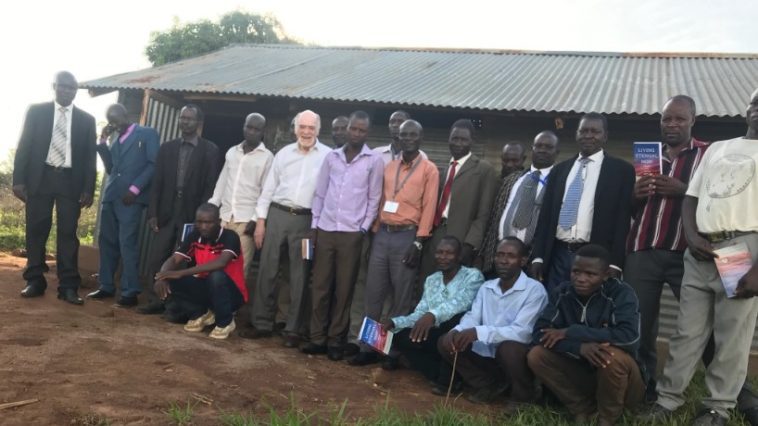 Pastor Charles is at the far left of the picture

[Originally published as My Africa Trip Report
Editor’s note: I ran into Ron when he reached out to me about an area of theology we share in common that many would see as unrelated to origins science. But who God is and how he works in the world is deeply connected to how he created us.
This first article syndicated by the Creation Club is focused on real-time discipleship, but, like many others today and in times past, there is a strong emphasis on God as Creator in his testimony. I hope you enjoy meeting this fellow creationist from Down Under.~Cheri Fields]

I had several objectives for making the trip to Kenya to meet with Charles Otieno Owino, head of the Kenya House Church movement, and the other KHC leaders.

I connected with Charles almost three years ago now on LinkedIn. It was largely because of my posts on www.livengeternal.net where I said the end-times church will be like the church described in the Book of Acts – House Churches.

In one post, I used the example of Francis Chan. He walked away from a church of 5000 to establish house churches with no paid pastors or buildings. Francis said the church was all about making disciples that make disciples. If a house church has not trained up disciples prepared to start another house church with family and friends in a short period of time (e.g., 6 months), then the church is not functioning as it should, he said.

Charles responded to my post with a hearty endorsement and outlined what KHC is doing in Kenya. Subsequently, I have been supporting KHC ever since to send out missionaries to establish House churches in new areas. KHC has grown from six to twenty-two house churches in the period I have been working with Charles.

We had one Zoom Meeting when Charles had all the house church leaders together for a time of thanks, praise, worship, and seeking God’s guidance on the way forward. However, despite my age, I felt God was prompting me to visit KHC to meet the leaders and establish where they were at in terms of the basics:

1. Belief in an inerrant Bible, including its young earth history. This is why we had a Zoom Meeting with Creation Ministries International at the start of our three-day meeting.
2. The Bible provides the true history of this universe. Creation, The Fall, Noah’s worldwide flood, God established the nations at Babel, God established his own nation Israel (role and purpose), central to that purpose, Jesus enters history at the prophesied time to save mankind:

Jesus said to him, “I am the way, and the truth, and the life. No one comes to the Father except through me.” John 14:6

This was Jesus’ first coming as the sacrificial lamb; however, the Bible clearly reveals that He will come a second time as the victorious King to establish His Millennial Kingdom on this earth. Prophesied end times signs indicate that His second coming is not too far distant. The principal prophesied end times sign was Israel becoming a nation again in 1948.

3. To ensure KHC understood the role and purpose of Israel in God’s plan for this universe, including Jesus’ second coming to rule and reign over the nations with the resurrected saints from a glorious, restructured Jerusalem for one thousand years.

The picture was taken at the end of our three-day meeting when a few of the pastors had already had to leave early to travel home. The dirt tracks to the meeting site were horrendous, certainly not roads.

I was hoping the English of the house church leaders would be good enough so that we would not need an interpreter. This was not the case. Fortunately, Alfred, the brother of the KHC leader Charles, is a teacher and we proved a good team.

The agenda of the meeting shows the focus on the Bible providing a true history of this world, Israel, and preparing for Jesus’ return to rule and reign on this earth with the resurrected saints for one thousand years.

The Holy Spirit led me to make one major addition to the program; we had two sessions on the role of the Holy Spirit in living the Christian life.

Ronald Edwards lives in Sydney, Australia. He holds a pharmacy degree from Sydney University and worked for several decades in senior positions in the pharmaceutical industry. After finding eternal life in Christ, he became the owner/CEO of Christian Press and Care & Share Products. His passion is to help grow and develop the House Church Movement in Australia and Kenya. You can find his ministry pages at Living Eternal.net and Millennial Kingdom.net