One of the greatest mysteries in secular physics is why there isn’t much antimatter to be found anywhere in our universe. What is antimatter? Well, it’s particles that share the same mass as matter but with opposite qualities. That means if matter has a positive charge, antimatter will have a negative charge. Basically, antimatter is matter’s counterpart.

Antimatter was discovered theoretically in the 1930’s and first observed in 1955. We can create antimatter in a lab but it can also be made naturally by, for example, radioactive decay or high energy collisions.

If you’ve ever had a Positron Emission Tomographic scan, used for diagnosing tumors, for example, you’ve had experience with antimatter. Perhaps someday antimatter will also be used to treat the cancer too. Others have suggested antimatter could be a source of fuel since just over two pounds of antimatter clashing with matter produces as much energy as the largest thermonuclear bomb ever produced! But this is a long way off since it currently takes far too long and far too much energy to create the desired reactions (think: using CERN’s budget and resources).

Now, let’s pause for a second and shift gears. We’re talking about creating matter and anti-matter here! That’s against the laws of thermodynamics, right? Matter can’t be magically created! Hang on, this is where it gets interesting. Energy can express itself as matter – in super-layman’s terms, it’s like energy has changed its state to form matter. So, what we’re talking about here is when energy forms matter.

Matter and antimatter are always created as a set. And that’s where the big problem for secular ideas about the origin of the universe comes in. According to the popular secular cosmology, the big bang, matter and antimatter would have been created together in the first fraction of time after the big bang. But there’s a problem. These two particles will annihilate one another and just leave behind energy. So if the big bang is true, our universe shouldn’t exist. There should just be some residual energy left and nothing more. And yet here we are.

So, how do big bang cosmologists explain what we see? They have to inject an imbalance of some sort. For some unknown reason, energy transformed into massive amounts of matter and anti-matter, which annihilated each other, but it just-so-happened that magically, an entire universe’s worth more of matter was created than its anti-matter counterpart. In fact, the scientific organization CERN uses some pretty coincidental language when describing potential magical fixes for this problem with the Big Bang theory:

“Some unknown entity intervening in this process in the early universe could have caused these “oscillating” particles to decay as matter more often than they decayed as antimatter.”

Instead of the “entity” being secret physics and the mechanism being the big bang, I have another proposal. This puzzle isn’t a puzzle for those who start with God’s Word. The Bible tells us “in the beginning God created the heavens and the earth.” That means that He set the formula for the physics that govern matter and antimatter, and created the correct balance right from the start. Our universe didn’t originate with a big bang—it started with a Creator speaking all things—matter, energy, and the tiny bit of antimatter we find—into existence. 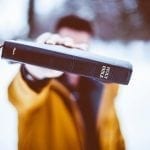