“Hello, I’m Sara Bruegel, working on the Henslee Tylosaur fossil project. In the last video, I introduced this project, and explained how the fossils are still in their “field jackets”. That includes the fossil, as well as the dirt that’s right around it. This tylosaur fossil was so large it had to be taken out in several different field jackets.

Each fossil should be carefully documented so that we know where it was found, what position it was in, and where it is in relation to other fossils. We use a grid system to help us document that.

The grid system is based off of important information from the dig site, like compass directions (north, south, east, and west) and measurements. You’ll notice that each section of the grid is labeled with both a letter and a number. Going from north to south, the rows [are] increase in alphabetical order, while going east to west, the rows increase in numerical order. The first field jacket we dig up is usually assigned to the section M-12 so that we can find more fossils in all directions without running out of numbers or letters.

Sometimes there are loose pieces, like in these bags, that are from a specific section in the grid, but aren’t really a part of field jacket. We’re going to be going through those to melt off any of the dirt and see if there are any little bits of fossil in them.

Okay, so what we’re doing here is we’ve got some of these small pieces and we have a label that tells what section of the grid it came from. This one says it’s from M-12 and M-13. So I’m just going to dump these out of the baskets. And later – you’ll notice we have this wire screen, later we’ll pour the mud through that to filter out any little bits of fossils that may be in there.
As you can see, in this basin here, we have the mud . . . we were melting that clay earlier, trying to get all the bones clear of the clay. Right now I’m going to mix it in so that we can get a pretty good idea of what’s in here and get the sticky stuff off the bottom. Now I’m going to pour it through this wire screen. The wire screen will catch any of the bones and just let the clay slide on through. Since the water’s pretty shallow, I’ll just kind of let it set down in there. So I’m going to sift through them . . . Oh look! There’s a little piece of bone right there. Looks like that’s pretty much all we’re going to get out of this field jacket, though. Maybe that little piece too. So we’re going to put those two pieces aside, in the baggie – the one that has the field jacket number that these were found in.” 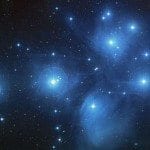 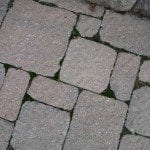