Following Newton’s approach, if matter is a wave-particle-word triality then recognizing that must be important for furthering our general understanding, including our comprehension of what matter is even doing, and this triality may give us insight into the why, even if we have no conception of the how…

The spectacular discoveries of what the laws of science describe expose the physicist’s ignorance of why and even of how they do it. 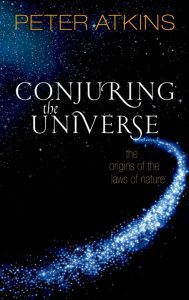 The 2018 Oxford University Press book Conjuring the Universe: the origin of the laws of nature by Peter Atkins wears its author’s atheism on its sleeve with the dust jacket claiming that the laws of nature leave “very little, if anything at all, for a Creator to do” and the preface beginning,

Yet right off, the first chapter makes it clear that the author (and by extension, all Oxford and the entire atheistic world) has no explanation for the ostensible topic of the book, the origin of these laws. He observes two things, however, about the nature of these laws, that they describe actions, and “that some are intrinsically mathematical and the others are adequately verbal” (p. 13).

Thus many of nature’s laws were discovered by thought experiments on such things as idealized gas, radiators, and spatial points (LaGrange), and even on things like trolleys and falling bodies.

The Laws of Nature are Non-Physical

The hypothesis of my paper is that matter is fundamentally non-physical, has as a corollary, that the laws of quantum mechanics, like all laws, are themselves non-physical. The most fundamental of the laws of physics, found in the probabilistic quantum world, appear to be not only conceptual but also declaratory.

Thus an electron shall be offset by a proton; it may not decay (a prohibition), and its wave state will proceed until observed. Extrapolating from the quantum world, some of the classical laws seem to be declaratory rather than physical.

For argument’s sake, we can concede that methodological naturalism could possibly explain something like the inverse square law. Consider though, that

This paper’s hypothesis suggests that no purely physical reason will ever be found to explain why or even how it could be that, unlike the neutron, the charge of the proton and the electron, while opposite, are equal.

Meanwhile, substantives like pronouns (current social insanity aside) are only masculine, feminine, or neutral. The corresponding electrical charge of various particles may exist because the respective quantum information packets of those particles are multi-field data records. Records that have a sexagesimal value of plus or minus one unit in their respective electrical charge “fields.” And these are fields not in the coulomb sense but in the data structure sense in information technology.

So even with the inverse-square law, which has perhaps the most physicality of all the physical laws, as a particle is approached, force increases yet it does not reach infinity.

Because its maximum value is set by definition, it is declared, not unlike when God said, “Let there be light.” This definition is set either within the quantum information packet itself, or more likely it resides in a mathematical universal constant which is referenced by a pointer from within the packet, which provides part of the context within which that packet exists and can be expressed.

The key to physics appears to be software. When we learn enough about software, eventually we’ll understand the hardware.

In computer science, a pointer is a data “object” that stores a memory address and, depending upon context (usage), it can take on the value of whatever is stored at that address.

God the Programmer and Memory

By quantum triality, the pointer references an address in God’s memory, for again, He upholds “all things by the word of His power.” That is, He “thinks” the values of a proton’s properties, or, more accurately, remembers them, from back when He set those values at Creation. And by that process, all protons have their exact properties.

(Perhaps God could have created a cosmic database, or data table, to which all such pointers refer, the first “cloud” so to speak. But Scripture implies a more intimate relationship with God Himself upholding all things.)

Let us consider the quantum information packet (i.e., the data record) of the hydrogen atom, for example, because of God’s remembrance of the values that combine to form that element, the pointers in each atom dereference to resolve its dimensions and forces. By the theory of triality, that is how God created the heavens and the earth.

Fast forward from then to just before He creates the New Heaven and New Earth. Second Peter 3:10 informs us that the heavens will pass away and “the elements will melt with fervent heat” and the earth will be burned up. This happens by God thinking a higher value for a proton’s charge.

Meanwhile, the non-physical is crashing down on the materialist from all sides.

And God is not physical.

For ninety years now, various quantum physicists have even been arguing that particles themselves may not be physical! And they might be right.

So the apparent exactness of all elementary particles may itself be evidence of their underlying non-physical numerical essence, with that exactness occurring by each particle’s constant quantum expression of its value and worth in the eyes of the Beholder.

So to the materialist, if it turns out that, along with everything else, matter itself is non-physical, well then, it’s just piling on.

For as Paul wrote to the Colossians,

Christ “is the image of the invisible God… For by Him all things were created that are in heaven and that are on earth, visible and invisible” and He Himself is Spirit and for whatever it means, “in Him all things hold together.” 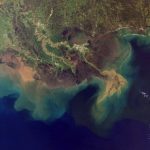