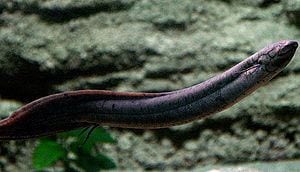 Ever heard of these creatures? Have you seen them in a picture showing the evolutionary story of the development of life? Let’s have a look at what these fish are really like!

There once were many different varieties of Lungfish in the waters all around the Pre-Flood world. Have a look at the size of a tooth from one we’ve found in Nebraska! Even today they can live for a very long time. One Australian Lungfish, called Granddad, lived at the Shedd Aquarium in Chicago from 1933 to 2017—and he was already grown up (at least 17) when he moved in!

Today there are two main types left living in the freshwaters of South America, Africa and Australia. The ones living in South America and Africa are closer to each other than to the Australian variety, but all of them set a puzzle for scientists trying to figure how animals changed from one variety to another. First, have a look at this picture: African on top, South American next, and Australian on the bottom. Let’s look at how these fish are the same and different.

The Australian Lungfish aka Queensland Lungfish has big scales, grows to 1.5m (almost 5ft) nowadays, and has only one lung. I found a computer graphic showing how Lungfish’s lungs fit into their bodies. If you’ve studied human anatomy, you know that this is pretty different from how our lungs work! Most of the time, the Australian Lungfish uses its gills to breathe. But during times of low water, they will gulp air into their lung and continue to survive in remaining puddles.

The African Lungfish comes in 4 varieties. The Marbled Lungfish can grow up to 2m (6’6″) long while the Gilled Lungfish only grows to 44cm (2ft) long. All four varieties have long, thin fins that look more like whiskers than limbs.

The South American Lungfish has almost no side fins at all except at the back. In the dry season, both the African and South American Lungfish will burrow into the mud and surround themselves with a mucus “cocoon” to hibernate until the water levels rise again. These varieties have two lungs which they have to use to breathe air all the time or they will drown.

All lungfish can slow down their metabolisms and hibernate at 1/60th of their normal body processes when water is scarce. They are predators feeding on fish, frogs, crayfish, mollusks, insects and anything else they can catch. Their “teeth” are really cool looking extensions of their very hard jaws. Mostly they crush food to make it small enough to swallow. When people keep Lungfish, they have to have a separate tank for them unless the other fish are quite large. They also have to be careful not to have anything else of swallowable size in the tank!

Baby Lungfish look a lot like tadpoles and breathe through gills (the South American and African babies have external gills).

BTW, the Lungfish has the largest genome of any Vertebrate that we’ve tested so far (a Japanese Flower holds the world record at the moment). Does that mean they’re the best and most developed?

And God created great whales, and every living creature that moveth, which the waters brought forth abundantly, after their kind, and every winged fowl after his kind: and God saw that it was good. And God blessed them, saying, Be fruitful, and multiply, and fill the waters in the seas, and let fowl multiply in the earth. And the evening and the morning were the fifth day. Genesis 1:21-23

And the Institute for Creation Research has an article about the Lungfish and other Fish that have been named as our “ancestors.”

New World Encyclopedia: “The fact that lungfish would be placed in the same class as such diverse animals as eagles, alligators, and chimpanzees, but not with sharks or salmon, shows the emphasis placed on lineage in current taxonomy.” That’s about as close to laughing at other scientists as you’re allowed to do or risk losing your job.

Animal World, “These fish would make Darwin proud as they are said to be one of the oldest documented fish dating back millions of years and documented through fossils.” I don’t think so. Darwin wasn’t arguing for animals staying exactly the same since the dawn of time! 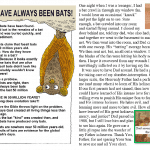