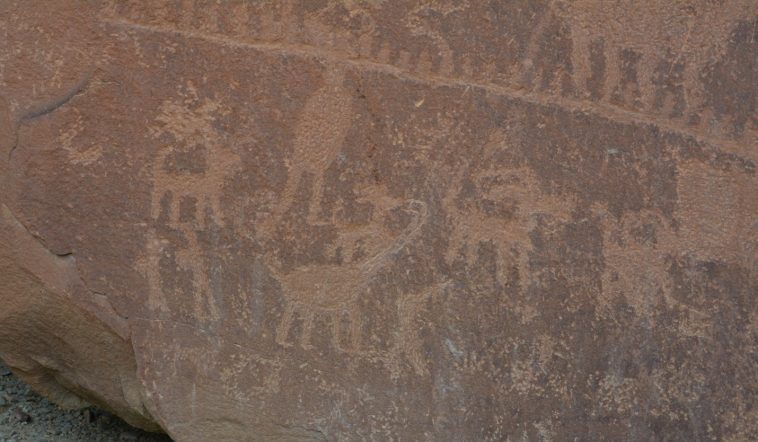 Nine Mile Canyon, Utah, is a 70-mile backcountry byway, northeast of Helper, Utah, and the final 40 miles is advertised as “The Longest Outdoor Art Gallery in the World.”

Mile Canyon is 30 miles north of Sego Canyon, with the permanent stream flowing into the Green River in Utah. Grand Lake may have once extended through Desolation Canyon of the Green River, into northern Utah, and Nine Mile Canyon exited into the lake waters.

It has panel after panel of Fremont rock art, mostly in petroglyphs but including a few petrographs. The thousand or so Fremont panels with 10,000 or more images are dated between 250 A.D. and 1250 A.D. Other rock art styles here extend back even earlier.

At the Balanced Rock, the artwork begins to be obvious. 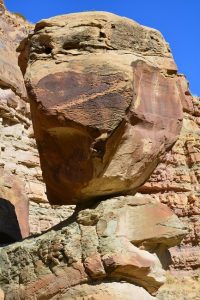 The first extraordinary art is under the upper end of the rock (See image at the top of the article). Mark Finkbeiner found the first dinosaur image under the balanced rock and friends pointed out “the sauropod” to me. 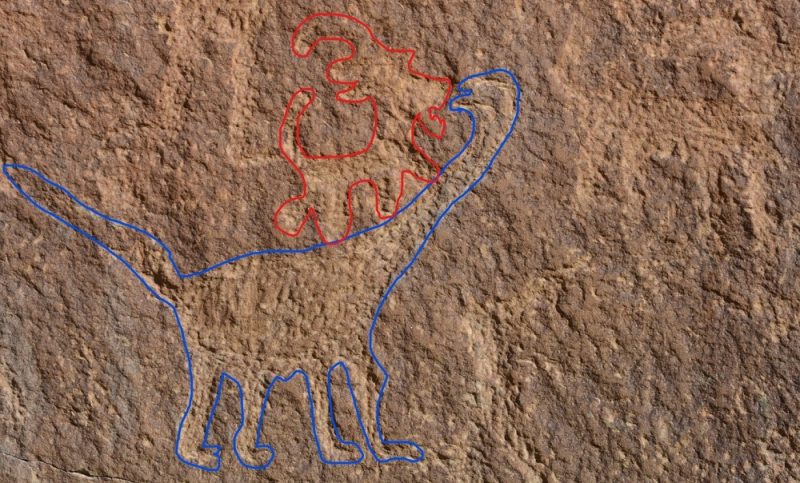 I initially saw both animals above as one image, but the sauropod is clear and is not attached to the other animal. On the left, the tail is long and twists around itself before joining the large body. Below, each leg has feet and long toes. The long neck is angled upward much like the tail. Together these make it appear to be a Brontosaur. The head is looking back over his shoulder, at the other animal.

And that other animal is a Dracorex dinosaur.

The Dracorex image has spikes on the nose and forehead, matching the fossilized skull paleontologists have discovered. It also matches the fossil with the large horns at the back of the head and the smaller horns underneath. The upper teeth are sharp, while the lower teeth are pegged, like the fossil. The body and legs also match what scientists expect, based on what they can determine from the features of the skull (which is all that has been found as a fossil).

One hundred feet past the sauropod and Dracorex images, we found this panel. It shows many images from the Fremont peoples.

Farther down the Canyon, we found this image, which has a badly-degraded sauropod on the left, a hadrosaur being ridden by a human being at the center, and what appears to be a pterosaur carrying a fish at the center-right. Farther on the right of that is another human being. What better evidence could there be that men and dinosaurs lived together?

Another panel has another hadrosaur being ridden.

The rider is using reins and the tail to direct the dinosaur. This hadrosaur image has a curving head crest; apparently, it is another Parasaurolophus.

This is the third hadrosaur dinosaur image in Nine Mile Canyon. It has the right head shape, eye placement, curved head crest, and long tail — although the tail swells near the end.

One of the outstanding features of Nine Mile Canyon is near the end, the Great Hunt Panel.

The Great Hunt Panel petroglyphs include bighorn sheep and other animals being hunted by humans with shields and bows and arrows.

Behind the buffalo image, and below a deer, is a sauropod dinosaur, in the same position as the one under the balanced rock, except for the tail, which hangs down. The sauropod image even has an eye and a possible head crest.

First, I ask other Christians to accept the same challenge that we accepted.

Since we are Christians, we should expect to live in the miraculous. Please, after considering the cost, pray that God will open your eyes, so that you can see and find more artifacts than we, or Dr. Dennis Swift, have found. Some may need to pray as long as we did — four or more years.  If you God opens a way for you and your family to see these artifacts, please let David Rives Ministries know.

The second experiment is to develop a map of the artifacts.

If petroglyphs and petrographs are found evenly distributed throughout Utah, Colorado, and Arizona, with no age-related pattern, that will say one thing. However, if the oldest artifacts are around the edges of Grand Lake, but not within the boundaries of Grand Lake, that says something quite different.

If newer artifacts do invade the old lake bed, but there are no ancient artifacts there, the date when Grand Lake drained can be established. This distribution, combined with the oral history of the Havasupai, would confirm the recent date when the Grand Lake dam breach occurred, therefore allowing us to date the carving of the Grand Canyon.

Greg Morgan is a retired nuclear safety engineer. From his salvation, it took him 15 years to convert from ancient-earth-creationist to biblical, young earth creationist. Following his BSME degree, he earned a BS in theology and is now dedicated to helping others become biblical young earth creationists in far less time and to develop into mature Christians. 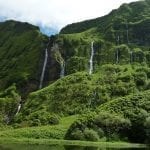