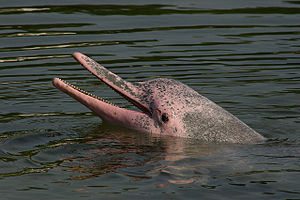 Several years ago, I learned about the Amazon River dolphins (and sharks) while watching a nature program. It is always fascinating to learn about creatures who live in unexpected places. What I didn’t learn until much later was that there are more fresh water dolphins around the world (but that will have to wait until next time)!

We’ll start with the Boto, or Pink River Dolphin of the Amazon, since they are the largest group. As you can see in the picture, some of these dolphins are kind of pink, but they come in a lot of other colors, too. Young Amazon dolphins are dark gray on top and lighter gray underneath. Most adult female are a shade of light gray. Turns out the pink color is from scarring that the males get by fighting each other.

One of the things you’ll notice about most river dolphins is that they don’t have high dorsal (backbone) fins. I’m sure God made them that way because they would tend to get caught on tree roots and things in their crowded environments. The one river dolphin that does have a dorsal fin is the Tucuxis, Sotalia (aka Gray River Dolphin) which lives near the end of the Amazon and is almost the same as its ocean neighbors.

Another feature He gave the Amazon River Dolphin is that they keep their chin hairs, which all dolphins are born with to help them locate food. River Dolphins also have longer snouts than their ocean cousins and have larger forehead “melons” which help them to use echolocation to find fish in muddy water.

The Creator also provided River Dolphins with both cone and flat molar teeth (ocean dolphins only have cone-shaped teeth). This helps them eat a large variety of food mostly over 50 types of fish including piranhas, plus the occasional crustacean or even turtle.

A mother River Dolphin only has a baby every 4-5 years. They carry their babies for about 10 to 11 months before giving birth. God timed the baby’s coming for May/June so Mom has the most plentiful food when Baby needs her the most. They have single babies that are about 80cm (31in) long and weigh around 6.8kg (15lb) at birth. Like other water mammals, the mother helps her baby get to the surface to breath and feeds her baby milk for a few months. The little one doesn’t leave its mother, though, sometimes staying with her for several years.

Males are often solitary, enjoying the bigger prey in the deeper parts of the river. Females tend to prefer the safer back waters where it is shallower until these dry up and force them back into the rivers and lakes until next flood season. But, a bit like the large groups that ocean dolphins form, River Dolphins sometimes live as a family unit with Dad, Mom and Baby. There have also been sightings of small family groups of dad, mom, baby and older sister living together.

More about other River Dolphins in Part Two! 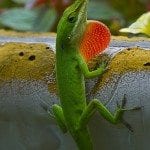