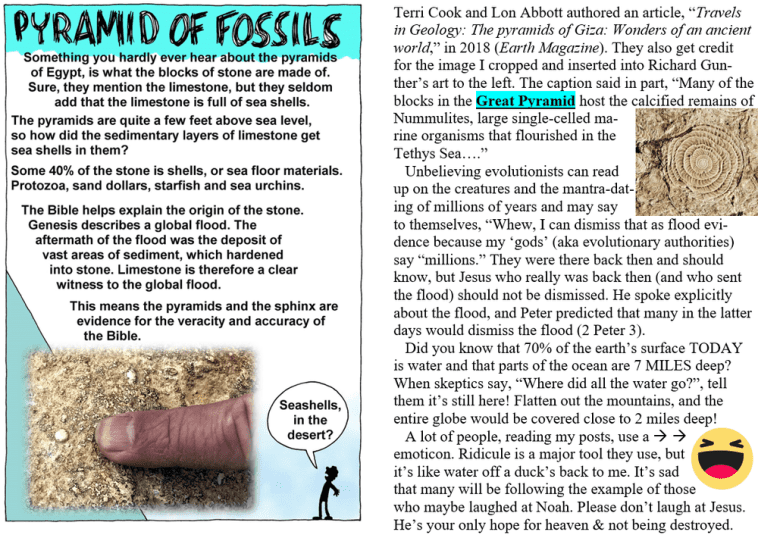 Pyramid of Fossils by Richard Gunther

Something you hardly ever hear about the pyramids of Egypt is what the blocks of stone are made of. Sure, they mention the limestone, but they seldom add that the limestone is full of seashells.

The pyramids are quite a few feet above sea level, so how did the sedimentary layers of limestone get seashells in them?

Some 40% of the stone is shells or seafloor materials. Protozoa, sand dollars, starfish, and sea urchins.

The Bible helps explain the origin of the stone. Genesis describes a global flood. The aftermath of the flood left behind deposits of vast areas of sediment, which hardened into stone. Limestone is therefore a clear witness to the global flood.

This means the pyramids and the sphinx are evidence of the veracity and accuracy of the Bible.

Terri Cook and Lon Abbott authored an article, “Travels in Geology: The pyramids of Giza: Wonders of an ancient world” in 2018 (Earth Magazine). They also get credit for the image I cropped and inserted into Richard Gunther’s art to the left. The caption said in part,

Many of the blocks in the Great Pyramid host the calcified remains of Nummulites, large, single-celled marine organisms that flourished in the Tethys Sea…

Unbelieving evolutionists can read up on the creatures and the mantra-dating of millions of years and may say to themselves, “Whew, I can dismiss that as flood evidence because my ‘gods’ (aka evolutionary authorities) say ‘millions.'” As if such people were there back then to really know.

But Jesus, who really was back then (and who sent the flood), should not be dismissed. He spoke explicitly about the flood, and Peter predicted that many in the latter days would dismiss the flood (2 Peter 3:1–6).

Did you know that 70% of the earth’s surface today is water and that a place in the ocean is nearly seven miles deep?

When skeptics say, “Where did all the water go?”, tell them it’s still here! Flatten out the mountains, and the entire globe would be covered over a mile deep!

A lot of people reading my posts use a laughing emoticon. Ridicule is a major tool they use, but it’s like water off a duck’s back to me. It’s sad that many will be following the example of those who maybe laughed at Noah.

He’s your only hope for heaven and to not be destroyed. 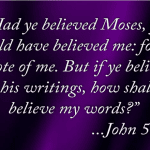