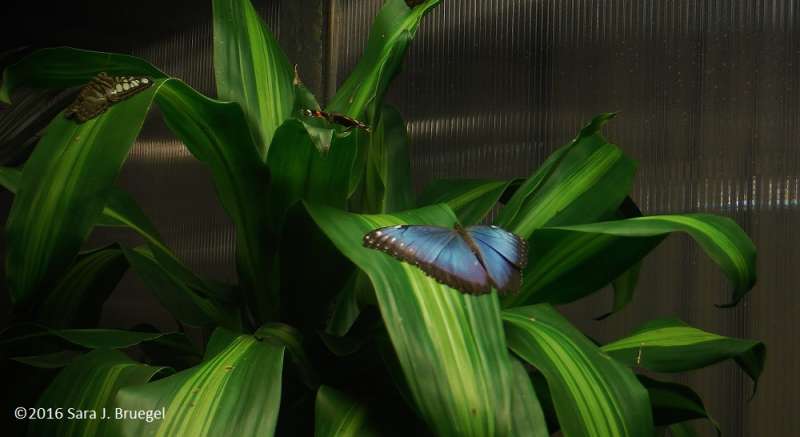 Kneeling on the floor with bated breath and camera in hand, I waited for the butterfly to move.  The large, stubborn Blue Morpho butterfly kept its wings tightly shut as it stood on the plant.  While the butterfly rested, all that was visible was the dull brown/gray pattern on the bottom side of the wings.  Looking the creature with closed wings, you would never guess what a brilliant, iridescent blue colored was on the other side of the wings.  Some of the other butterflies resting on the same place would slowly open and close their wings as they rested, but not the Blue Morpho – their wings were kept tightly shut.   Without even a second’s notice, the butterfly took off and fluttered in circles around my head.  It was joined by two others who fluttered away and then back to where I was.  Most of the other butterflies were much more cooperative models, but not the Blue Morpho that I found so very spectacular.

Watching their hyperactive fluttering and circling made me laugh as I tried to chase down these shy, beautiful insects with my camera.  At one point, a group of three flew straight towards me and ran right into my camera, probably drawn to the bright blue color on part of the camera.   Later on, I held an injured Blue Morpho on my finger.  It’s the incredible iridescent blue color of their wings that make these tropical butterflies especially fascinating and drove me to continue trying to capture the shy creatures on camera.  While the flat orange and black colors of monarch butterfly wings are made by the pigments (dyes) of their scales, this iridescent blue is instead made by the way light waves interact with the intricate structure of the scales.

Biologists have been able to look at the wing scales of a Morpho at 20,000 times magnification (seeing them 20,000 times larger than normal) and noticed some very precise grid-like pattern of ridges made in miniscule structures of the scales. The color of a Morpho butterfly is made by the way light bends and reflects through these microscopic structures in the scales.  This is called diffraction grating.  Even the black patterns on the wings of this type of butterfly are colored differently from the black of a monarch.  To make it twice as intricate, another type of butterfly, classified as Lamprolenis nitida actually has two diffraction gratings (giving it two colors) on the same scales.

Were these intricate butterfly wings made by random chance accidents of evolution? I think they are better explained by a Divine Designer – God.   Their design is surprisingly precise and their beauty breathtaking. Scientists have tried (and are still trying) to copy many aspects of the design of butterfly wings and scales.  It takes brilliant minds and high-tech equipment to even try to copy what we see in butterfly wings.  To top it off, the spectacular beauty of these butterflies really isn’t necessary.  We can see some marvelous aspects of the character of God illustrated here: He cares about even the tiniest details of a short-lived creature and loves graciously giving beautiful gifts for us to appreciate. (Read previous articles on butterflies here)

“Have you not known? Have you not heard? The Lord is the everlasting God, the Creator of the ends of the earth.  He does not faint or grow weary; His understanding is unsearchable.” ~ Isaiah 40:28 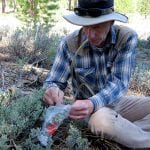 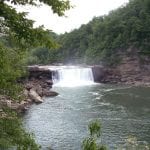