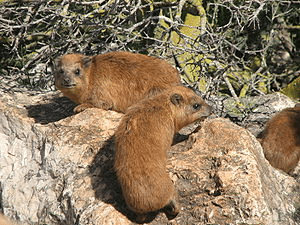 “The conies are but a feeble folk, yet make they their houses in the rocks.” Proverbs 30:26


Growing up, I never could picture what these animals looked like. None of the English names we have for these guys meant anything to me since I’d never seen one. If you look up Coney with an online dictionary, it will tell you that a coney is a fish (try to picture fish building a house in the rocks!). My kid’s dictionary says that ‘Coney’ is a different way of spelling ‘Cony’ which is a European Rabbit. I’ve even heard that they were actually birds. (This site HERE is about birds, but they’re from the island of Coney, not the kind they have in Israel.)

So, now you know why I was so confused, but what are they really like?

Turns out that the Biblical Coney, aka Rock Badgers, aka Hyrax is something that looks more like a ground hog!!! When I went to look them up last year, I realized that I had just read a story about their African cousins by Jan Brett. Down in Africa they are known as Dassies, and the most common name for them in English now is Hyrax [hi-raks]. The ones living in Israel are part of the Syrian Rock Hyrax family.

Studying this has been really fun, because the first thing I saw on the African Wildlife Foundation page is that they don’t fit neatly into any group of animals. Some Evolutionists say that they are really close relatives of elephants, sea cows, and manatees!! Now, that is pretty crazy. God definitely has a way of throwing wrenches into people’s neat “tree of life” machines. (I’ll be writing about more of these kinds of animals soon, so stay posted.)

From the picture, you can see that hyraxes look kind of like marmots, mongooses, and ground hogs.

They have short, thick, brownish fur that can range from light grey in the desert, to almost orange in southern Israel, to dark brown in greener areas. They have small ears and thick bodies. Grown Hyraxs weight around 9lbs and are about 20ins long, so they’re a little smaller than a ground hog.


Unlike these other animals, Hyraxs don’t dig deep burrows. The places they choose for homes already have piles of rocks and crevasses to live in. They keep their homes tidy by deciding on one spot to use as a bathroom so the rest stays clean.

Hyraxs love to live in groups that range from 10 to as many as 80 members. Like prairie dogs, they post a sentry (usually the Daddy) to keep an eye out for danger while the rest find food. If the sentry spys danger, he will call a high pitched alarm and they all scurry into their hiding places among the rocks. This protection works so well that it is rare for one to be eaten by the south Judean wolves.

Singing is a favorite pastime for Hyraxes. They seem to let each other know how they’re feeling and keep in touch with neighboring groups with all kinds of whistles, twitters (think they like computers?), shrieks and growls. The Tree Hyraxs of Africa are nocturnal, so they keep all the neighbors awake at night with their squeals and screams!

To stay near the protection of their dens, Hyraxs only venture out about 150ft from their homes to look for food. They’re vegetarians, eating whatever kinds of plants they can find, especially grass and leaves. They have incisor teeth that are nearly tusks (that’s part of why people think Hyraxs are so close to elephants) to chew on tough plant parts. Desert Hyraxs get most of their water from the plants they eat. They can climb trees and will get into people’s gardens to munch the citrus leaves there. They also will eat insects and grubs.

A mother Hyrax is pregnant for 6-7 months before giving birth to two or three babies. Compare that to a rabbit who only takes a month to pop out 4-12 babies! Baby Hyraxs are born with their eyes open and lots of fur to protect them. They start running around at just an hour old and try out the veggies within a day or two. They take over a year to grow up, while a rabbit only takes 6-7 months, but both animals live about the same length of time- about 10-12 years.

Hyraxs are a ‘lazy’ bunch. They spend about 95% of the time lying around! During the day they spend most of the time basking in the sun. Even though Hyraxs are mammals, they can’t keep their bodies constantly warm like we do. So they get warmer and cooler with the day and night, so lying in the sun helps warm them like a snake.

Not surprisingly, the fossil record shows that before the Flood there were a lot more varieties of Hyraxs. It shows that they lived in more places including Europe. And (guess what!) some of them were really big, “about the size of a small horse”!! Wow, that’s a big furry critter!

Fossils of Egypt (look down for all the cool fossils they’ve found in Egypt!) 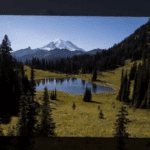 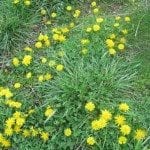