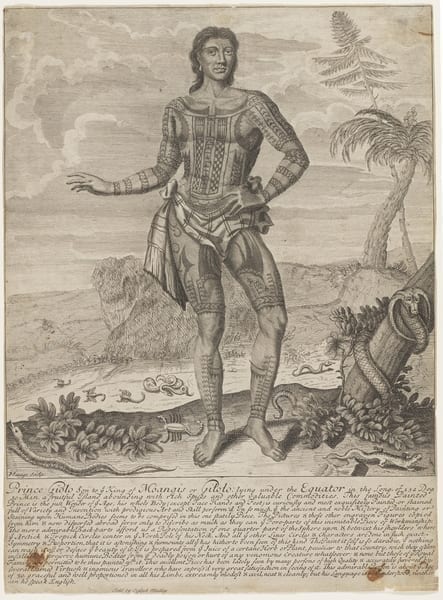 We are currently living in one of the most racially charged times since the Civil Rights Era of the 1950s and 60’s.

It is almost inconceivable that in such a scientifically-enlightened age as the 21st century, humanity would still be in the throes of such an evil and arcane concept. How long will this scourge of racism driven by the pride of racial superiority plague us?

In this article I will argue that it is man’s insistence on fabricating origins myths with the sole purpose of removing the necessity of a Creator God which lies at the heart of racial inequality. This is the cancer that metastasizes into the scientific theories used to construct a timeline of an ever-evolving humanity from our nearest primate ancestor, to the most primitive of men, to the savage nations, to the European bastions of civility, and beyond to whatever/whoever the future holds. Nothing testifies to the depravity of this endeavor more than the wildly popular human zoos, or “ethnological expositions,” of the 19th and 20th centuries. 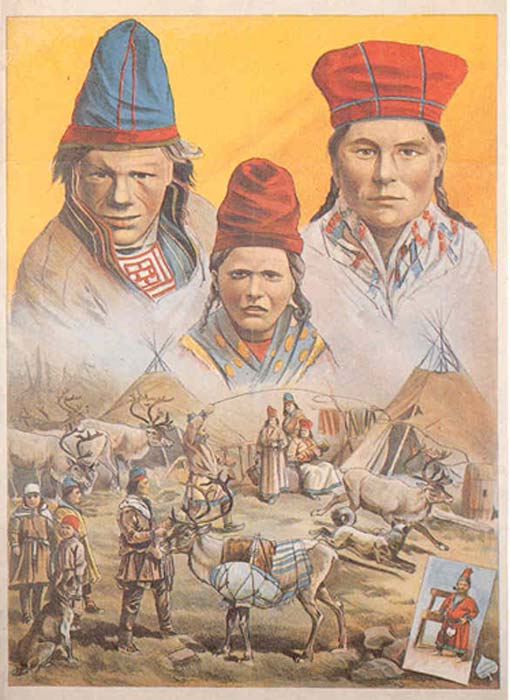 Human zoos, or “ethnological expositions” as they were called, were “19th- and 20th- century public exhibitions of humans, usually in an erroneously labeled ‘natural’ or ‘primitive’ state. One-man human zoos also existed as early as the 17th century in London. The displays often emphasized cultural differences between Europeans of Western civilization and non-European peoples or with other Europeans who practiced a lifestyle deemed more primitive. Some of them placed indigenous populations in a continuum somewhere between the great apes and Europeans.”

In their article for the University of Illinois, Abbattista and Iannuzzi describe the comprehensive scope of this phenomenon:

The human beings who were put on exhibition during the second half of the nineteenth and first half of the twentieth century belonged to peoples from all parts of the non-European world. And all the regions of the globe, almost without exception, contributed with their representatives to the public display of non-Western cultures and races before Western onlookers: Africa- from Egypt to Madagascar and the Cape, from Sudan and the Horn to the western regions, including the inner regions more recently explored- the Near East, North and South America and the Caribbean, the Northern Polar regions, Lapland, Australia, New Guinea and the Pacific Islands, India, and South-East Asia.

A precise quantitative estimate of the ethno-exhibitions and their protagonists is very hard to make. We are certainly talking about hundreds of expositive episodes, which could have involved a total of about 20-30 thousand people, gathered in groups comprising anywhere from 4-5 to even more than 100 members. The ethno-expositions occurred in the major European and North-American cities, especially those hosting the great expositions, and also in provincial towns, with truly comprehensive coverage (from Norway to Italy, from Portugal and Spain to Russia)… 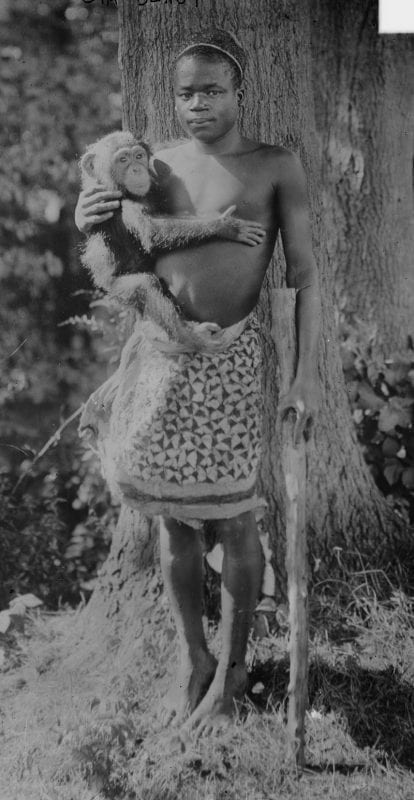 The tragic story of a young Congolese tribesman, Ota Benga, is a rare glimpse into the life of one of these individuals marginalized in the name of science. There are conflicting accounts of the events that transpired leading up to his becoming an exhibit in the Primate House at the Bronx Zoo. However, most seem to indicate that his wife, children and entire tribe were slaughtered while he was away on an elephant hunt. Somehow he ended up at a slave market where he was purchased by the explorer Samuel Verner, and brought to the U.S. with other pygmies who also ended up on exhibit.

Prior to his arrival in New York, Benga was displayed with other pygmies at the St. Louis World’s Fair in 1904. As Ken Ham notes in his Darwin’s Garden, Benga and the other pygmies were “studied by scientists to learn how the ‘barbaric races’ compared with intellectually defective Caucasians on intelligence tests and how they responded to things such as pain…The exhibit was said to be ‘exhaustively scientific’ in its demonstration of the stages of human evolution. Therefore, they required the darkest blacks to be clearly distinguished from the dominant whites. Ota’s presence as a member of ‘the lowest known culture’ was meant to be a graphic contrast with the Caucasians, who represented humanity’s ‘highest culmination.'” Ham continues, “Meanwhile, the anthropologists in charge of the display continued their research by testing and measuring. In one case, ‘the primitive’s head was severed from the body and boiled down to the skull.’ Believing that skull size was an index of intelligence.” This skull measuring, or “craniometry,” was another allegedly scientific method used to construct a racial hierarchy. 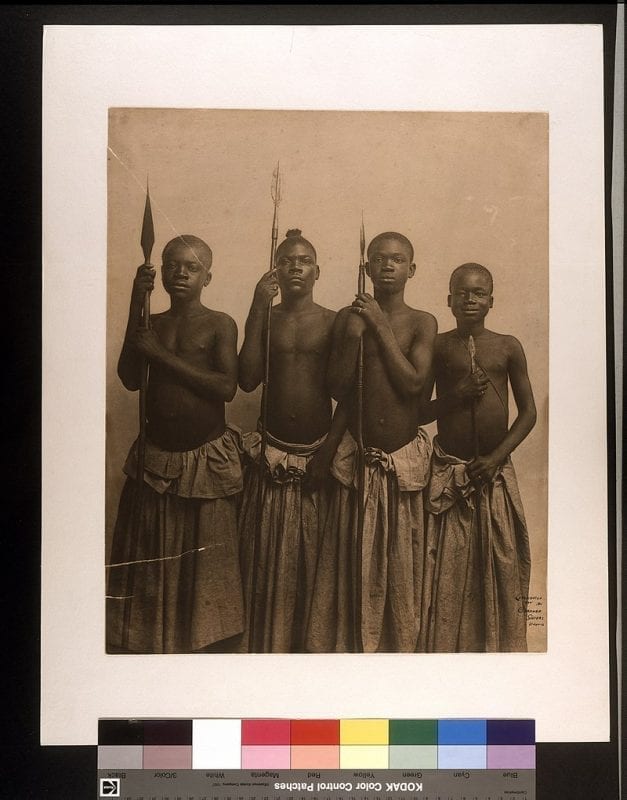 After the fair Verner took Benga and the other pygmies back to Africa. Benga remarried, but after his second wife died he returned to the U.S. with Verner where he ended up on display at the Bronx Zoo in New York. Eileen Reynolds writes:

Having debuted the previous afternoon, Ota Benga was an overnight sensation with the headline ‘Bushman Shares a Cage with Bronx Park Apes‘ hitting Sunday morning’s New York Times. The floor was scattered with bones to suggest that Benga, whose teeth had been chipped into sharp points (as was customary among young men in his forest-dwelling Congolese tribe), was a cannibal. With only an orangutan named Dohong as a companion, Benga alternated between glowering silently, shooting a bow and arrow, and angrily mimicking the crowd’s jeers. While some in the mob might have felt pity or shame at the sight of a caged man, the Times reassured readers that he was ‘one of a race that scientists do not rate high in the human scale.’ 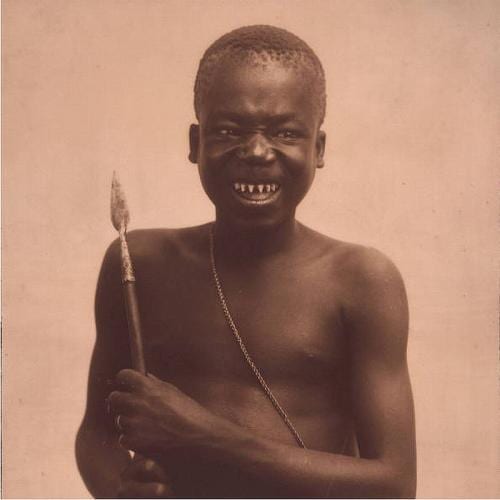 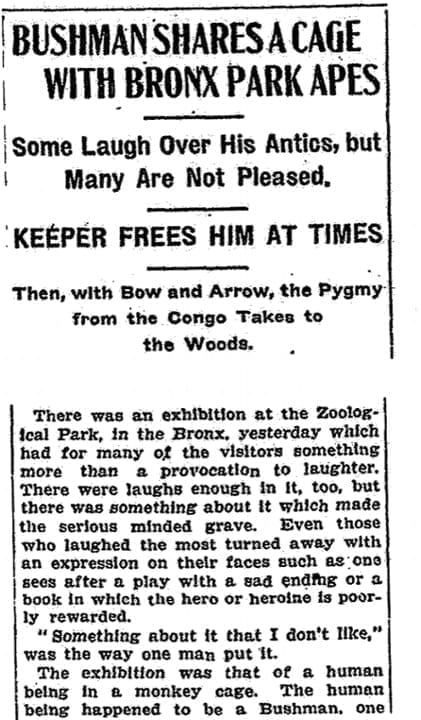 Details from an article devoted to Benga in Smithsonian Magazine indicate that his death was just as tragic as his life. After being removed from the zoo in New York, he was moved to an orphan asylum in the same city. From there he was taken to a seminary in Lynchburg, VA, and reports indicate that he worked for a stint in a tobacco factory. Some time afterward he worked odd jobs in return for a place to live. However, he committed suicide in March of 1916.

The horrors of Benga’s life as an exhibit had been perpetrated by some of the most respected scientists of the day. Reynold’s attests:

…three of the men who orchestrated Benga’s display were respected scientists with considerable social and political clout: One of the Bronx Zoo’s cofounders, Madison Grant, was author of the influential book The Passing of the Great Race, which argued for anti-miscegenation laws and sterilization of ‘inferior’ races– and carried a ringing endorsement from Theodore Roosevelt on its book jacket. Another cofounder, Henry Fairfield Osborn, was the son of railroad magnate William Henry Osborn, taught at Columbia, served as a paleontologist for the U.S. Geological Survey, and ultimately became president of the American Museum of Natural History. The zoo’s first director, top zoologist William Temple Hornaday, had previously served as the first superintendent of the National Zoological Park in Washington, D.C.

Many modern, atheist evolutionists have claimed that it is the outdated, anti-scientific Bible that supports the modern day scourge of racist thought. They cite examples of some fundamentalist, evolution-denying, Christian biblical creationist who have justified their own brand of racism with select Scriptures from the Bible. Unfortunately, this is a well-deserved criticism. Ironically, it was not the Bible from which these concepts sprung. Instead, they were rooted in the prevailing mainstream scientific consensus of their day. Many creationists who have espoused racist views have latched onto pseudoscientific theories like the ones mentioned above to lend credence to any number of wild extra-biblical creation extrapolations that would support racial superiority.

**Cover image “Giolo (real name Jeoly) of Miangas, who became a slave in Mindanao, and bought by William Dampier together with Jeoly’s mother, who died at sea. Jeoly was exhibited in London in 1691 for money as a one-man human zoo, until he died of smallpox three months later in London.” Wikimedia Commons/Public Domain 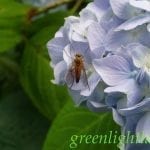