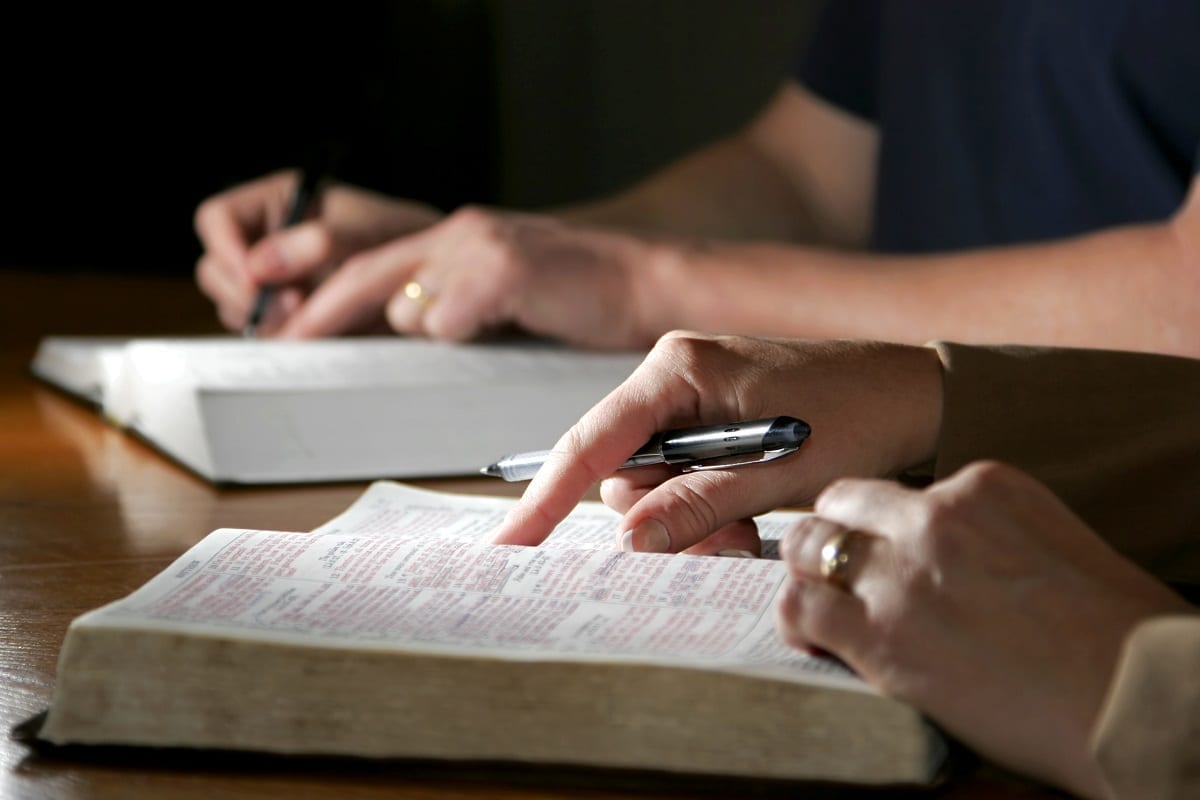 How do we know the Bible is true?  There is an ongoing debate over whether apologetics should be approached from a presuppositional or evidentialist framework.  A thorough analysis of each position is beyond the scope of this article.  However, it is worthwhile to consider what undergirds Christian faith.

It is certainly true that secularists’ arguments are based upon presuppositions.  All of their theories are based upon assumptions of naturalism and uniformitarianism.  Underlying these assumptions is the a priori presupposition of atheism, or at least agnosticism.  Evolutionists have admitted as much, recognizing that they “cannot allow a Divine Foot in the door.”ii

This is consistent with what the Bible says.  “But if our gospel be hid, it is hid to them that are lost:  In whom the god of this world hath blinded the minds of them which believe not, lest the light of the glorious gospel of Christ, who is the image of God, should shine unto them.”  II Cor. 4:3-4.  “But the natural man receiveth not the things of the Spirit of God: for they are foolishness unto him: neither can he know them, because they are spiritually discerned.”  II Cor. 2:14.

There are several practical problems with relying solely upon presuppositionalism as a proactive apologetic.  Presuppositionalism derives from the double predestination of Augustine and Calvin, in which some are predestined for heaven and others are predestined for hell.  Hence, those predestined for hell lack the ability to accept the arguments that lead to the knowledge of God.  Full acceptance of this principle calls into question God’s justice because it implicates God for creating some people for the sole purpose sin and damnation, and it also implies that those in that category never had any real choice in the matter.

A second problem with this view is that it renders absurd the preaching of the gospel.  If it were truly the case that a person has no capacity to recognize the evidence for God until God “switches them on,” then why does God ask Christians to preach to unbelievers and to seek to persuade them of the truth?  The Christian witness relies upon persuasion (II Cor. 5:11); positive proofs (see Acts 18:28); and demolishing counterarguments (II Cor. 10:5).  This is not to deny the work of the Holy Spirit—the Bible speaks of divine power at work in both the preacher and the hearer.  II Cor. 10:4.

However, the Bible does not say that unregenerate man lacks the capacity to see the truth of God’s Word.  The darkness of mind occurs in stages.  According to the Bible, the truth is offered to all.  John 3:16; Rom. 10:18.  Sinful man suppresses the truth in unrighteousness.  Rom. 1:18.  Willful suppression of the truth leads to corruption of the mind.  Rom. 1:21.  This willful rejection of the truth and corresponding corruption justifies God in hardening some and showing grace to others.  Rom. 9:18.

Nothing in the Bible teaches that people inherently lack the capacity to understand the evidence for God.  In fact, Paul goes so far as to say that those who have neither the law nor the gospel are judged according to the light they have, as informed by the evidence of creation and the witness of their consciences.  Rom. 2:14-15, 1:19-20.  We must therefore infer that some neutral common ground exists upon which even unregenerate man may recognize the evidence for God.

This does not, however, mean that the only alternative is evidentialism.  The problem with evidentialism is that its focus on arguing within the framework of its opponents leads its adherents to accept the presuppositions of secularists as binding upon themselves.  It is one thing to demur by accepting the presuppositions of secularists for purposes of, for example, making a reductio ad absurdum argument.  It is another to attempt to confine one’s entire argument within the presuppositions of those who reject God.  This is a kind of servile acquiescence to the command of Pharaoh to make bricks without straw.  It is this type of thinking that has led many leading Christian evidentialist apologists to accept that science disproves the Bible on certain points—particularly as to the creation and the flood. 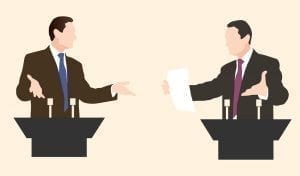 The problem with the debate between presuppositionalists and evidentialists is that both sides tacitly admit there is no evidence for God.  Presuppositionalists make the subjective argument that they can see the reasons for presupposing the existence of God, but unbelievers cannot.  Evidentialists argue objectively from the evidence they think secularists will accept.  However, neither side acknowledges the Bible as evidence.

My series, “The Evidence for Creation,” explained why the Bible must be considered as evidence.  The Bible is a written record, and it is entitled to the same evidentiary value as any other written record.  The burden is on secularists to refute it.

Those who presuppose naturalism can never answer two key questions.  The first question is how the universe came into existence.  While secularists have presented some evidence for change over time, they have never offered any plausible (much less scientific) explanation as to how the universe and life came into existence in the first place.  The second thing secularists cannot deny is the existence of the biblical record.  They can attempt to reduce its authority by speculating that it was merely derived from myths passed on through oral tradition and eventually reduced to writing.  However, they cannot prove this and the evidence, when carefully considered in an unbiased manner, suggests otherwise.  Secularists employ a double standard when they accept other historical records but deny the Bible, which is the best-attested written record in human history.  If God does not exist, why is the most influential book a record that purports to be the Word of God?  II Tim. 3:16.

Creation and the Word of God, then, provide powerful evidence of the existence and identity of God.  Creation demands a creator; the Bible provides a written record of eyewitness testimony as to who God is and what He has done.  The record contains prophesies, some of which were fulfilled after the time existing records were written (i.e., the Dead Sea Scrolls).  Additionally, those who have gone before us and those who have lived out their Christian lives among us consist of “a great cloud of witnesses” who all testify to the truth of God’s Word.

It is not necessary to presuppose the existence of God because creation and the Scriptures testify as to God’s existence.  Nor is it necessary to rely on philosophy and materialistic evidence.  The direct testimony of God and eyewitnesses renders these things moot.  The fact that many people reject the evidence for God does not require believers to assume the non-existence of this evidence.  The role of Christian apologetics is not to attempt to prove the Bible, which speaks for itself, but rather to authenticate and corroborate it with extrinsic evidence.

One may ask where, then, is faith?  We are often told we must accept things on faith that we cannot prove.  However, God has not asked anyone to exercise blind faith.  What God asks is the faith(fulness) to infer that God’s person and character in areas we cannot see will be consistent with what is revealed by the evidence we can see.

The faith God requires is the recognition that He is, and that He is a rewarder of those who earnestly seek Him.  Heb. 11:6.  We cannot directly perceive God with our human senses.  Likewise, we have no ability to foretell what the future may hold.  Therefore, God requires faith as to these things.  Faith in the gospel essentially consists of belief in God, and what God will do in the future (salvation, sanctification, and eternal life) based on what God has done in the past (through the life, death, and resurrection of Christ).

It is not a blind faith, as if God demands that we sincerely believe the moon is made of green cheese.  Rather, it is an informed faith that reasons from the evidence God has provided.  From creation, the Scriptures, and the great cloud of witnesses, we recognize the existence and work of God, if we faithfully follow the evidence.  The refusal by many to accept this evidence does not negate the existence and persuasiveness of the evidence.  From this same evidence, coupled with our personal experience with God, we recognize by faith that God, who is intrinsically good and faithful, will act consistently with His past actions and in accordance with His promises in the future.

So, should we be presuppositionalists or evidentialists?  I see no reason to woodenly adhere to either position.  Our foundation is not based upon presuppositions, human philosophy, or materialistic evidence.  The most powerful evidence supporting Christianity is the combined force of creation plus the testimonial evidence provided by Scriptures, the cloud of witnesses, and personal experience with God.  “These things were not done in a corner;” (Acts 26:26) but rather, this evidence is open and obvious, available, manifest, and well-known to people all over the world.  The evidence for God is like the proverbial 800-pound gorilla in the room.  People who attempt to deny it and reason around it are doing so, not because of lack of evidence, but because of their defiant suppression of the truth in unrighteousness.

Therefore, we are not bound by presuppositions.  Nor are we slaves to Pharaoh, who would have us make bricks without straw.  Rather, we reserve our right to present the evidence of God, reasoning from the solid foundation of evidence in the form of creation, Scriptures, and the great cloud of witnesses, to the conclusion that the Bible is the Word of God and the ultimate authority.  We use this sword of the Spirit in the power of the Spirit to persuade men through positive proofs and demolition of counterarguments.  The promise we have from God is that the seed we sow will bear fruit in the hearts of some, who will become disciples.  Matt. 28:18-20.

As Christians, we live our lives and seek to persuade others based upon our core belief that the Bible is the Word of God and the ultimate authority.  However, our core belief is not merely a presupposition; it is a conclusion drawn from the evidence. 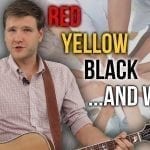